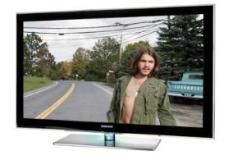 The performance is as good as the styling - what more is there to say?

This set won an Award just one month ago. Now, it's not unheard of for Award-winning products to be bested by a rival in the very next issue. Products that didn't make it to us in time for judging can ruin the celebrations even before the taste of the champagne has gone. Not this time, though.

There are seven brand-new sets in this size category vying to pinch the UE46B8000's freshly engraved gong. But the Samsung is so accomplished it hangs on to its crown.

Stunning looks, stunning images
It's impossible to ignore the way this TV looks. When we first tested it, we commented that its 117cm diagonal measurement combined with its 3cm depth to made it look like a giant credit card.

Those dimensions should excite wall-mounters, as will the information that the wall bracket is a single-screw affair that adds just 1.5cm to the overall depth.

Of course, the proof is in the viewing, and the Samsung comes up trumps here, too. Play the Harry Potter and the Order of the Phoenix Blu-ray and the troublesome early panning shots are reproduced by the Samsung's 200Hz motion processor with the kind of stability, sharpness and smoothness that only the Sony KDL-46Z5500 can beat – and even then only just.

Capable of deep, inky blacks
The set's also capable of producing proper, inky blacks – but, impressively, ones with insight and punch.

Dark scenes are dark, bright scenes are bright, and a scene that includes both darkness and light, the battle in the Department of Mysteries, thrills as the pure white light from the wands sparks out of the surrounding blackness.

Detail levels are exemplary, ensuring every inch of Hogwarts is revealed in all its craggy glory, while colours are rich yet subtle enough to avoid making skin look overly flushed.

See all our Samsung TV reviews

When asked to upscale DVD and Freeview pictures, the Samsung responds in clean, detailed and sharply defined fashion, and although the set can get somewhat flustered by particularly busy soundtracks, it's far from the worst we've heard in the audio department – an impressive feat itself given the lack of space for drivers.

In short, you might initially fall for the Samsung's looks, but we're happy to confirm that it's the performance you'll most appreciate in the end.