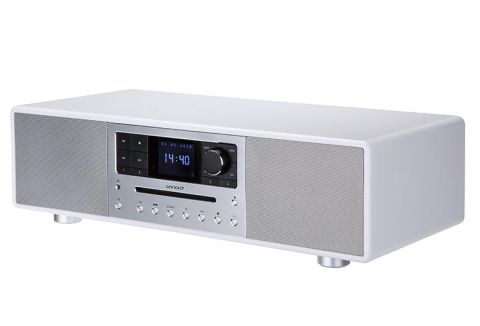 This is a good-looking, posh music centre – but you can buy much better sound for your money

The Meisterstück is the third music system we have seen over the years from Sonoro. Last year, we gave four stars to the Stereo 2, having given the original Stereo unit the same rating before that.

One of the features missing from the Stereo 2 was its lack of streaming ability, and the Meisterstück rectifies this matter. This, to all intents and purposes, seems to be a Stereo 2 with the benefit of a range of streaming options.

Like the Stereo 2, the Meisterstück has a CD slot underneath a large, comprehensive display.

Two speaker grilles flank the screen and behind each lies an 8cm midrange driver and a 20mm tweeter. A 14cm driver fires down under the unit to provide the bass heft.

As we’ve come to expect from the German company, the Meisterstück is a nicely put together piece of kit. It is reassuringly weighty and the piano gloss on the curved wooden casing is beautifully finished – as you’d expect for a product costing the best part of a grand.

It comes in a choice of three finishes: white, silver or black. As with the Stereo 2, this unit wouldn’t be out of place in a five-star hotel – unsurprisingly, the company makes plenty of sales in this market.

The Meisterstück comes pretty fully stacked with options for playing your music. As well as the CD drive, there’s FM, DAB (and DAB+) and internet radio, two auxiliary ports to wire in external sources, a USB port, optical port and an ethernet socket.

Wireless connectivity can be done via Bluetooth or wi-fi, so you can stream to the unit easily from a mobile device, or network attached storage device (NAS drive). The Bluetooth signal is also bidirectional, so it can send a signal out to a pair of headphones, say, as well as accepting one in.

Spotify Connect is on board too, so will access your playlists and so on once you’ve set it up. It supports the usual digital formats, including WAV, FLAC and WMA, up to a maximum of 16-bit/48kHz, so high-resolution playback isn’t on the cards – but then, we don’t think that’s a deal-breaker.

The supplied remote control handset is certainly comprehensive, but rather confusing to use. There are no directional controls as such, the volume up and down buttons being pressed into service, along with the fast forward and rewind buttons, for your up/down/left/right functionality.

It works, but it requires a little too much pause for thought with each use. Inputting a wi-fi password into the unit is a painfully slow process – but at least you need do that only the once.

The somewhat irritating remote-control foibles become irrelevant, anyway, once we download the Undok app (freely available for both Android and iOS devices). We can’t imagine anyone using the handset once they’ve got the app in hand – it’s a much easier drive.

The Undok app is also the place to go to sort out the multi-room capabilities this Sonoro unit can indulge in with suitably compatible kit.

Sonoro has most bases covered as far as getting your music into the Meisterstück. The important question left, is how good is it at letting it all out?

The answer is, competent – but with a couple of caveats. The Meisterstück has the familiar sound of the other Sonoro family units we’ve tested. It’s quite a mature sound, and fairly even across the sonic spectrum.

The midrange is a highlight, and radio comes across particularly well, with its requirement for good voice reproduction.

Streaming is, in theory, the USP of this unit, so we log on to our NAS device via wi-fi and stream Tom Waits’s Midnight Lullaby. Sure enough, the distinctive Waits voice rings loud and true. This is, generally, a comfortable listen – as is appropriate for this type of device.

But when we switch to the Game of Thrones soundtrack, chinks start to appear in the Meisterstück’s armour. The overall sound lacks crispness; the edges of notes blend into one another, and the lasting sonic impression is just a touch cloudy – with a ‘smear of vaseline over the lens’ effect.

As a unit to play background music to the room, it’s perfectly adequate. But if you want to sit down specifically to listen to your tunes, your £1000-odd will be better spent elsewhere.

The bass is reasonable for the size of the unit, but it’s not as crisp as some rivals, such as Ruark’s impressive R4 Mk3 (£650). We find that placing the Meisterstück fairly near a rear wall helps its delivery of the lower registers; in the middle of a room, it struggles a little to plumb reasonable depths.

There are tone controls, so you can fiddle with the bass and treble if you so wish – but we find leaving them in the neutral setting is the best bet.

We play Radiohead’s 15 Step, one of our go to test tracks for getting tricksy with our review products.

The Sonoro puts up a decent effort, but inevitably gets a little tripped up by the percussive, confused, detailed nature of the recording. To be fair, so do a great many of the products we put to this most stringent of tests.

Of more concern, however, is a rather strident tone that kicks in quite promptly at higher volumes. At anything near room-filling levels, the treble runs the risk of getting uncomfortable (moreso, we feel, than with the Stereo 2, which also hints at this problem.)

The other question is just at whom is the Meisterstück aimed? It’s certainly great to have a unit that can play pretty much anything you can throw at it, but we wonder how much of the functionality anyone will use.

If you have your files stored digitally, you’ll be using the streaming functionality and the radio services, but the CD player will go unused for the most part.

If you’re using the CD player, you probably won’t have a NAS drive. And if you want to move into that area, you may well be better off using the equipment you already have and investing in a standalone streamer – the Arcam rPlay (£340) for example – to add to it.

The Meisterstück costs a good chunk of money, and we’re not sure we can recommend spending £300 more than its sibling Stereo 2 for, in effect, just the extra streaming functionality. As a side note, the Meisterstück loses the rather nice ‘Wellbeing’ functionality that the Stereo 2 offers.

The Meisterstück is certainly an impressive looking unit, and does a decent job with sound.

If you’re looking for an all-in-one unit that will play CDs and has streaming functionality, it could serve you well – but there’s no doubt that you can get far better sound for your money elsewhere.

See all our Sonoro reviews