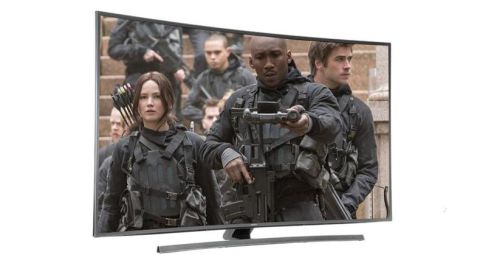 An exceptional performer across the resolution board, with stacks of features to boot

If you were tempted by our glowing review of Samsung’s £5800 flagship UE65JS9500 TV last month, but weren’t willing to break the bank to get it, then we have some good news – the Samsung UE65JS8500 could be just the TV for you.

The UE65JS8500 belongs to the ‘Series 8’ range, one below the JS9500, but it shares a lot of its pros: a stunning 65in curved screen; Samsung’s proprietary SUHD nano-crystal technology; and smarts more fruitful than a vegetable plot.

As expected, it takes a slight hit on performance in comparison (namely picture subtlety) and there’s less metal and no built-in camera.

The Samsung UE65JS8500's picture is so impressive out of the box we’re almost tempted to forego our routine THX Optimizer disc tests.

We don’t, of course, but the necessary changes are more a case of fine-tuning than drastic alterations.

Playing some native 4K content, it’s hard not to be glued to the screen. Threadlike lines and punch-packing colour eat up every pixel. Its devotion to detail, dramatic contrast and convincingly natural hues speak volumes about realism, while its motion-savvy delivery is smooth enough not to warrant much in the way of processing modes.

Even during relatively dull scenes – ones you might usually consider as an opportune moment to put the kettle on – the Samsung looks interesting enough to string you along.

As with any 4K TV, the real challenge is upscaling lower-resolution content. We load up a Blu-ray of Neill Blomkamp’s futuristic robot romp Chappie, and the Samsung UE65JS8500 exhibits the same strengths as when showing 4K content.

It remains faithful to Blomkamp’s vision of the robotic do-gooders, with each mechanical detail as sharp as a pin, their colourful patches and bright lights well judged too.

Banners and graffiti on the walls jump out against the bleakness of the near-future Johannesburg backdrop, and the film’s trickier shadings of colour are handled with nuance.

The Samsung doesn’t discriminate against black detail, so you’re not left in the dark (literally) when it comes to gloomier scenes.

It takes the intentionally jerky camera movements in its stride and even the high-intensity car chases and robot acrobatics cause few problems. We’d imagine this would translate well into 3D but sadly, the necessary glasses are an optional extra at £15 per pair from Samsung’s website.

Out of curiosity, we end with a relatively dated DVD copy of Star Wars: Return of the Jedi and it’s not a decision we lament.

There’s shine to C3PO, punch to R2D2’s lights and as much detail in Chewbacca’s coat and Jabba the Hutt’s face as you can expect from a TV 'making up' 95 per cent of the picture.

Colours are pretty on-point and although objects in the background are understandably soft, picture noise is largely muted. Upholding contrast well, it produces a striking standard-definition picture that won’t consign your DVD collection to the bin.

Standard-definition broadcasts are of a similar high quality.

The Samsung’s speakers can’t quite summon the bass weight or dynamics to deal with Chappie’s funky sci-fi score, though that’s not for want of trying. Generally, it sounds clear and communicative – more solid than expected too.

Music (and other media) can also be played from a smartphone via wi-fi direct or, if you have a compatible device, the TV’s screen-mirroring function.

But we’d always advise getting a dedicated sound system for music playback.

The smart hub is, of course, one of the TV’s main attractions and it offers the full suite of apps (Netflix, Amazon, catch-up TV, you know the drill). These aren’t just chucked at you in a daunting list but neatly organised into categories and at the mercy of a search bar.

This intuitive, user-friendly approach – ubiquitous across the platform – is down to Samsung’s new open-source OS Tizen, which ditches last year’s smart portal for an overlaying strip of pop-up cards that opens doors to recent and featured content.

Think LG’s WebOS but less colourful and not quite as slick. The whole experience is easy to get along with, though, as are the basic and smart remotes – both well designed and instinctive to use.

Multi-tasking is encouraged: you can enter split-screen to view two sources at once. Face recognition and motion control features can also be unlocked via an optional camera that plugs into the back of the TV’s USB slot.

Joining it are component inputs and Ethernet and satellite sockets, but as with all Samsung’s 2015 smart TVs, the lion’s share of connections (four HDMI and two USB inputs and an optical output) are housed in a separate One Connect Mini box so you don’t have to squeeze between the wall and TV to plug in your Xbox.

It’s not the ‘wow’ design you may expect from a premium TV, but we prefer the understated, discreet design of its thin brushed-grey bezel to the overtly shiny one on Samsung’s flagship set. The minimalist design is tidy and well finished – even the back panel has a stylishly ribbed texture.

The screen has a subtle curve, and the central metal bar stand will make it easy to accommodate on a range of AV rack sizes.

On the flipside, it’s not quite sturdy enough to avoid a wobble if you knock into the telly, so be careful.

With more sizes, resolutions and competing TV technologies than ever, choosing the right TV for your needs is becoming increasingly complex.

However, if you’re after big-screen thrills, consider 4K a must-have and can stretch to £3000, we can’t think of a better option than this. The Samsung UE65JS8500 won’t let you down.