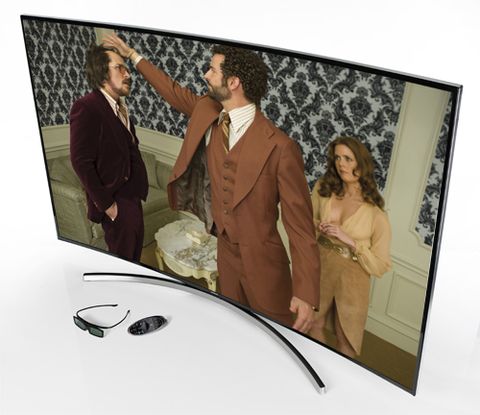 The Samsung UE65H8000 is our first taster of Samsung’s 2014 range of TVs, and we are mostly impressed.

The upmarket H8000 series was announced at CES in January, and we’ve been waiting impatiently for the first production samples.

If this 65in set is representative of this range’s talents (48in and 55in screens sizes are also available) then Samsung is on good form.

The big news is that the UE65H8000 features a curved screen. Last year we reviewed a couple of curved TVs – the Samsung KE55S9C and the LG 55EA980W – and both sported OLED panels.

This year, Samsung’s gone back to LCD panels (using edge LEDs to supply the backlighting), and the set is not necessarily the worse for it.

We’re still undecided about the merits of a curved panel. We can see the attraction for a single viewer who sits straight in front of the screen. Such a person will enjoy a more immersive picture that’s as sharp and crisp at the edges as it is in the middle.

And let’s not underestimate the high-tech brownie points earned by owning something as different at this. Head in to any electrical store and you'll see a steady stream of people stopping dead in their tracks to ogle the curvy TVs on display.

So if you buy one of these, be prepared to discuss the merits or otherwise of the curved screen with just about every visitor.

Are there any downsides to the curved screen? If you’re viewing the TV set at an angle, the proportions of the image distort according to how far along the curve you look.

This effect won’t be massively off-putting to most people, but is acknowledged by the TV manufacturers enough for them to display sets at CES with bendable screens that adjust for curvature.

When you get past the curved shape, you’re left with a well-featured 65in Full HD TV set. Those expecting a 4K or OLED panel with such an upmarket set are in for a disappointment.

It seems that production difficulties and the associated high costs have forced Samsung to put OLED technology on the back burner for a while, at least as far as the mass market is concerned.

The omission of 4K is more of an issue for us. Admittedly, the bandwagon of this higher resolution technology has only just started rolling, and there’s quite a way to go before we would consider 4K-ability essential in every TV.

But, a high-end model such as this should be adequately future-proofed. We don’t think the UE65H8000 is.

Our view is cemented by the knowledge that Samsung has 65in 4K-capable models available at around £4000 while Sony has alternatives at around £3500. We would expect these prices to drop over time too.

Move away from 4K and things look brighter for this TV. Take a look around the back and you will find a space for what Samsung calls an Evolution Kit.

This kit allows the processing and smart functionality of the set to be upgraded in years to come.

The company has already started supplying suitable modules for older models (at around £200 a pop), so there’s reason to be confident that this screen will benefit similarly when the time comes.

We start with a Blu-ray of Jack Reacher. This is a somewhat murky film with a touch of (intentional) grain to the image, and the Samsung H8000 copes well.

Over recent years Samsung has shown itself to be a master of delivering deep blacks with its LCD sets and this TV is no different – they’re properly dark, and more akin to what we’re used to seeing with a good plasma panel.

More than that, this Samsung is capable of revealing fine detail in shadows rather than lose it all in a uniform darkness, as some rivals do.

Try to catch it out with scenes that combine bright and dark elements in one frame and it responds well. There’s enough punch in whites to satisfy, but perhaps less than we’re used to from the brand.

It seems Samsung has taken a step back from its traditional full-throttle approach to delivering contrasts and colours, taking a more mature, subtler route instead. This is something we also noticed on the Samsung Galaxy S5 screen.

The result is a natural presentation with a convincing colour palette. Difficult-to-render features like skin tones are nicely handled, and even vivid-colour scenes from the London Olympics opening ceremony come through with plenty of sparkle.

There’s a lot of insight here, and a real sign of progress for Samsung TVs.

Motion is well handled, even in busy scenes, and it’s impressive how this set stays composed and avoids the overly processed feel that some rivals still impart.

Things aren’t quite flawless though. In very dark scenes there’s a degree of unevenness in the backlighting.

It’s not enough to spoil things, but it’s worse than we’ve come to expect from Samsung. We hope this isn’t a sign that the company is allowing standards to drop.

The UE65H8000 comes with two pairs of active glasses. They are light and relatively comfortable.

We load our current favourite 3D film, Gravity, and enjoy what we see. This TV is hugely accomplished when fed with properly produced 3D source material such as this.

The image remains stable, only really showing signs of struggling in complex scenes such as the initial debris hit at the start of the film.

The depth of the image impresses us, and we like the nicely rounded way this set draws people and objects. It’s a long way ahead of the layered 2D effect we still see from many rivals.

It stays bright too, despite the usual dimming effect that 3D replay suffers from. The overall level of detail is impressive as is the TV’s understated way with delivering it.

Move onto a DVD of Stoker and the UE65H8000 continues to please. The picture is surprisingly free of noise (considering the upscaling involved) and is crisply detailed.

The set’s well-balanced colour palette remains unblemished, as does its confident way with motion. The large screen size puts something of a magnifying glass on the source material, so we certainly wouldn’t want to view a standard definition image from very close up.

But, at normal viewing distances – just less than three metres for a 65in – it’s fine.

The UE65H8000 is equipped with both Freeview HD and Freesat tuners. These are good performers.

The HD channels are crisply detailed with a good handle on contrast and colours. Picture noise is relatively low, too.

Standard-definition material shows the anticipated drop in quality; detail is a little blurred and noise levels are higher.

Still, the garish colours of daytime TV are kept in check and we’re pleased with the level of picture stability on offer.

Samsung has long been on the cutting edge as far as smart functionality is concerned. Perhaps surprisingly, the story this year is of refinement rather than any radical change.

There are some minor tweaks to make accessibility of source material from the likes of smartphones and tablets just a bit easier, and some slight reorganisation of some apps.

It’s all still pretty slick and easy to use, though we do wonder whether this failure to take a big step forwards leaves a gap for rivals to fill.

Samsung has been terrific in equipping its sets with catch-up services (4oD, ITV player, Demand 5) and film apps (Netflix, Wuaki.tv), and for the most part it remains so.

The lack of BBC iPlayer on our review sample is a bit of a shock though, but we’re told it should be coming soon. Let’s hope so.

YouTube and web browsing are handled reasonably well; though browsing still isn’t quite slick enough for us to wholly enjoy the experience. YouTube in particular is rendered well considering the relatively low quality of some of the video streams.

Samsung has made notable improvements in the sound quality of its TVs over the last few years and that continues with the UE65H8000. It uses downward firing speakers for the left and right channels helped out by a subwoofer.

There’s 40 watts of power amplification driving the three channels, the subwoofer taking half of that amount.

The sound is perfectly listenable, although naturally you will get a significant improvement with a good soundbar or home cinema system.

It has decent detail and enough refinement not to sound aggressive even at high volume. There isn’t much in the way of low-end weight, but the bass that is here is relatively balanced and agile.

The UE65H8000 comes with two remote controls. There’s a well-laid out traditional wand that comes packed with a full array of buttons, and a redesigned more minimalist remote.

We quite like the look of the pebble remote, but it didn’t feel particularly classy in use. In the end we went back to using the standard alternative the most. Gesture control is still available, but we still haven’t warmed to it.

As you’d expect there are no shortage of connections here. There are four HDMI inputs, three USBs and the ability to connect to your home network, both wired and wirelessly.

We always recommend wired because it’s a more stable connection. Legacy analogue video inputs such as Component, Composite and Scart are also included.

The TV is easy to set-up. The menus are relatively unchanged from last year and are none the worse for that.

They’re laid out simply and for the most part easy to understand. It’s worth playing around with the active contrast and motion modes, but for the most part we tended to keep settings on low if we used them at all.

Much of it comes down to taste. Unlike a lot of TVs we review, this one didn’t need much tinkering to get a good picture. That says a lot for the basic rightness of the panel’s performance and the quality of the on-boards electronics.

We like the new multiview feature. It splits the screen to allow the viewer to watch two sets of content at the same time, so you can watch say, a live football match while browsing the internet. Useful.

Less useful is Football mode. No doubt trying to cash in on the World Cup starting in June, this does strange things to the picture – imagine the most hyped shop demo image you’ve ever seen – and unbalances the otherwise acceptable sound too.

It’s one to avoid unless you want to record on to a USB hard drive. In this mode the TV will record the highlights, deciding whether something is worth saving depending on the crowd noise.

A couple of years ago a Full HD 65in set costing just over £3000 would have been seen as a bargain. Today, we think it needs to have 4K TV to fully justify the price.

The Samsung UE65H8000 also has a curved screen of course, but while it’s a great talking point we’re not totally sold on it yet.

Look past the price and there are positive things about this set: it has a fine picture, with arguably the most convincing colour palette the company has engineered to date. Detail levels are high and the spec sheet is full.

Make no mistake, the UE65H8000 is a truly accomplished performer, but in today’s cut-throat market, sometimes even that isn’t enough to earn a wholehearted recommendation.