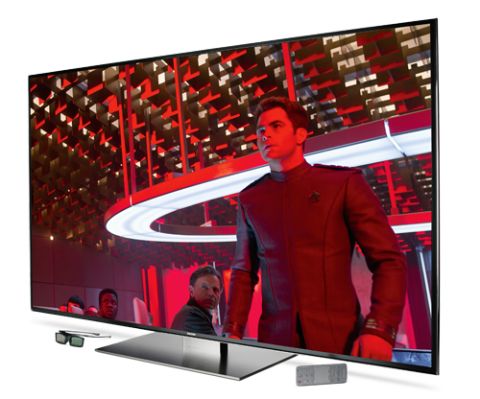 The UE65F9000 is a good rather than great set, but it’s extremely well equipped – particularly when it comes to smart features

But the highlight figures are to do with the Samsung F9000's panel resolution: it’s 3840 x 2160 pixels – exactly four times as much as standard Full HD.

The terminology hasn’t settled down yet. Some people will still refer to this screen resolution as 4K, while we notice many manufacturers are using UHD (Ultra High Definition). Whether it ends up being called a 4K TV or Ultra HD TV, we like it. A lot.

There isn’t a great deal of native Ultra HD material around at the moment. For testing we’re limited to a few clips that Samsung has provided on a USB stick, yet we’re impressed by what we see.

We’re struck by the sharpness of the picture compared with Full HD, not to mention the lack of picture grain.

Complex textures that can be found on fruit skin – we didn’t say they were interesting clips – are delivered with pleasing stability, and we’re stunned by the subtlety of colours.

True, the colour on most of the demo material is a little overcooked in order to impress, but even then the Samsung UE65F9000 does a fine job. Its image is massively detailed, as expected, and stable with motion.

The big advantage of UHD is that it lets you sit much closer to the screen without seeing picture flaws. As with Sony’s KD-55X9005A, we could get really close to the panel without losing sharpness or having picture noise intrude on things.

The Samsung’s whites don’t look quite as punchy as the Sony’s, and object outlines lack a little boldness. We want our UHD pictures to sparkle and make us go wow.

The Samsung doesn’t quite manage that, but its understated approach has appeal too, letting us concentrate on what we’re watching rather than being distracted by the brilliance of the picture.

Move on to 'standard' Full HD (that’s a resolution of 1920 x 1080 pixels) and the Samsung does really well considering it has to generate three out of every four pixels on the screen.

With something relatively unprocessed like The Perks of Being a Wallflower we’re taken with the Samsung’s subtlety. Skin tones look natural, exhibiting plenty of nuance when it comes to shading and colour intensity.

The UE65F9000 copes well with scenes that combine bright and dark elements in one frame – it’s something that many LCD screens still struggle with, regardless of the backlighting technology they use.

This set uses highly controlled edge-lit LEDs, but despite the on-paper inferiority to directly backlit panels, we like what we see. Take a look at the specifications and Samsung quote the dynamic contrast ratio as “Mega Contrast”. As good as this panel is in that respect, we chuckled.

Move on to a Blu-ray of Jack Reacher and the Samsung continues to pile on the points. It copes well with fast motion and uncovers plenty of low-level detail, even in the gloomier scenes. Once again, this is an area where many LCD panels still suffer.

The Samsung comes with two pairs of 3D glasses. These are slim, light and pretty comfortable in use. Pairing is quick, and once sorted, we are treated to a good 3D performance.

John Carter won’t be required viewing for many, but some of the set-piece action scenes work really well in 3D. The Samsung delivers a crisp and mostly stable performance that only really struggles in large-scale battle sequences that feature plenty of rapid movements.

The image remains decently bright and displays a pleasing sense of depth. Many rival sets suffer from a lack of brightness in 3D, but that isn’t an issue here. We also found watching 3D less tiring than we usually do on active 3D sets. This more than anything suggests strongly that the Samsung is doing most things well.

The large number of pixels on a UHD panel – some 8,294,400 of them – means that a massive amount of scaling has to be done for a standard-definition picture of 414,720 pixels to fill the screen.

Consider that only one in 20 pixels is actually provided in the source material and the sheer size of the task facing the TV set’s internal scaler becomes apparent.

Bearing this in mind, the F9000 does reasonably well. The TV’s nicely judged colour balance remains unblemished and the Samsung does a decent job with detail and contrast.

Switch to broadcast TV and this Samsung delivers fine results with any quality HD channel. It has Freeview HD and Freesat tuners, and both work well.

We tune into the news on BBC HD and see fine stability and plenty of finesse with faces. The set is really revealing of the differing standards of footage used, though. Daytime TV is tough for any set to do well, but this one rises to the challenge. As for standard definition broadcasts… we wouldn’t.

Samsung is currently at the cutting edge of smart capabilities in TV, so it comes as no surprise to find the Samsung UE65F9000 is well sorted in this respect. As has become standard at higher price points it can connect to your home network wired or wirelessly.

We had no issues with stability with either method, although we prefer a wired connection for maximum reliability.

The 65F9000 has the full range of catch-up apps from the now standard BBC iPlayer to the less commonly seen ITV Player, 4oD and Demand 5. Along with these, it features Netflix and LoveFilm to provide decent movie streaming sources.

The Smart Hub design is the same as with all of Samsung’s 2013 sets. The layout is split into various sections devoted to TV, movies and social media – as is common, Facebook, Skype and Twitter are on the menu.

The set even has a pop-up camera mounted on the top edge for suitable social occasions. That camera is also used for the TV’s Gesture control system – which we continue to find frustratingly unreliable.

Flatscreen sets have built up an unenviable reputation for poor sound quality. It’s no surprise given that the drive towards slimmer sets means space for speakers becomes ever more limited.

It’s only recently that manufacturers have started to try and make things better. Here Samsung uses a two small drive units, each augmented with a dedicated woofer. These are powered by four amplifiers, with a total output of 70W. While no substitute for a dedicated sound system this combination produces a surprisingly listenable sound.

It’s relatively detailed, smooth in the treble and delivers a decent dose of weight. In absolute terms, though, we still prefer the sound of Sony’s KD-55X9005A – it produces even more in the way of insight, scale and dynamics from its slim frame.

Look around the back and you won’t find the usual complement of sockets. All the connections – four HDMIs (one with MHL capability), three USBs, Component and the usual array of aerial, Ethernet and digital output – are housed in an external box. It’s a relatively compact unit and can be tucked away for neatness.

This arrangement also future-proofs the TV to a certain degree. As we write there’s no set standard for the delivery of Ultra HD source material.

But it will happen, and when it does there’s a strong chance that early adopters could be caught short because their TVs aren’t compatible. Samsung’s configuration means any necessary upgrades could be built into the input box. Good thinking.

As you’d expect from any top-end set, the Samsung UE65F9000 comes with plenty of goodies. There are the now customary two remote controls: a conventional busy affair packed with buttons to cover every function and a more glamorous touch-pad remote that looks simpler and allows voice control too.

As with other Samsung sets we’ve tried, voice control is a little too hit-and-miss for our tastes.

The Samsung UE65F9000 is without doubt a talented set. It’s a well thought-out product with very few weaknesses. Even its sound quality is better than most.

What it isn’t, though, is a superstar. Regardless of source material the picture quality doesn’t quite have the punch or crispness to really wow us.

The very best sets make an instant and lasting impact on us and, as good as it is, this Samsung doesn’t quite do that.