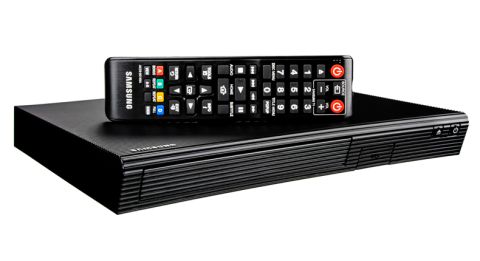 Not ahead of the curve performance-wise, but a decent disc spinner

Samsung has got curve fever. Just over a third of the company’s TVs are curved this year, and that ratio is similar for its Blu-ray players. But while bendy panels are designed to offer a more immersive experience, for disc spinners it’s simply a quirky aesthetic.

In the case of the entry-level BD-J5500 though, it’s not the curved shape that steals the design limelight. The entire body, available in black or white, is so deeply ribbed it could be played like a Guiro if you had a stick.

The absence of a display is becoming the norm at the budget end, but Samsung has taken things further by having no power light either. We miss the reassurance of one, but at least there are no distractions during movie watching.

The remote is more matter-of-fact, a proper-sized tool similar to the traditional one offered with the company’s TVs in recent years.

It makes a nice change from the pokey handsets offered with rival players, and while the space-hogging numerical keys mean its face is fairly busy, big, well-labelled buttons make it easy to get along with.

The BD-J5500 is the lowest 2015 model with smart features, and to access them you’ll need an internet connection via ethernet. Once hooked up, you’ll have access to Amazon Instant Video, YouTube and Netflix, among others. Three choices can be conveniently pinned to a tab on the home menu.

Although we find the multi-panel, graphic-heavy interface a little busy, it does allow for quick and direct access to apps and media on your network over DLNA, on a disc or from a connected USB key.

The USB input is at the front of the unit, hidden under a well-camouflaged removable rubber flap which although gives the player’s front a cleaner look, is a little fiddly to remove. The rest of the sockets – an HDMI and a coaxial output – are around the back.

Like the Sony BDP-S4500, the menu flashes up instantly on start-up. The disc tray is very quiet and has an aura of sophistication about it as it smoothly slides back home.

Blu-rays load in a pretty standard ten seconds, but the operational whirr during disc playing is a few decibels noisier than usual, so you wouldn’t want it right next to your ear.

Feed the player The Amazing Spider-Man 2 Blu-ray and the image is spick and span. Edges are cutting and detail delicately, but not overly, etched.

As Spidey swings through the city and action comes thick and fast, motion is well-controlled – an asset that makes it a tempting option for 3D playback too.

The Samsung’s palette is invitingly radiant, and turning down colour levels a notch in the ‘user’ picture mode gives it a more preferable balance. It doesn’t quite have the natural colour delivery of Samsung’s TVs though.

Contrast is generally good, the suit’s black web of lines is solid and inky deep. That takes a small hit when we drop down to DVD (as does crispness), but there’s more than enough definition and detail to call the Samsung a decent upscaler.

Sonically, it isn’t too shabby either. It appears on its toes in fast, action-packed scenes, with soundtracks pulling through with clarity, speed and agility.

We’d like a bit more weight though, and the presentation feels a little restrained compared to the class leaders.

You might find the BD-J5500 an aesthetic pull. You might not. Either way there’s more to like than just the design. Picture quality is pleasing with both Blu-rays and DVDs, and the sound has its merits.

It might not have the picture subtlety and precision to top your shortlist, but it does deserve a place on it.

Read all our Samsung reviews