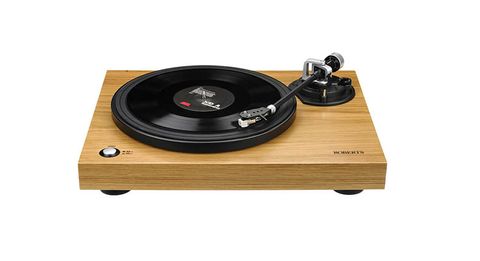 The RT100 sounds like Roberts has thrown a bunch of parts together to see what sticks, and the results are underwhelming

Sometimes it’s difficult to see how something once so good has gone so badly wrong. Even analysing each particular decision with the benefit of hindsight, pinpointing the one key moment that led to the almost inevitable decline isn’t always straightforward.

The outlook for the Roberts RT100 isn’t quite that bleak, but it is difficult to comprehend quite how such a well armed and generally well built turntable could fall this short of the leading pack.

There is a built-in phono stage, of which use is optional, and a USB connection for digital conversion. Both of these are features we’re becoming used to at this entry-level price, offering the kind of convenience that suits the market well.

Speed is selected via a push button on the plinth – simply press down for 45rpm or leave up for your albums.

We are impressed by how well the RT100 has been engineered: the main bearing is snug, there’s little give to the tonearm and, a pleasant surprise for an entry-level deck, Roberts has gone to the trouble of decoupling the motor.

The RT100 is also semi-automatic, the platter beginning to spin as soon as the tonearm glides across, and dons a removable head shell for the simplest of cartridge changes. As catering for first-time buyers goes, Roberts has laid on quite a spread.

There are of course downsides to having a fracture so close to the cartridge, but really it is only with the plinth we can find true fault.

Though the feet it sits on offer suspension, the plinth itself, however well isolated from resonances travelling that way, feels far from robust.

Even lifting it from the box, our fingertips graze the MDF on the RT100’s undercarriage, the only side bare of wood veneer, and a simple tap returns a quite hollow sound.

Given the obvious precision and care that has gone into the rest of this deck’s construction, it is a bit of a letdown.

As ever, it’s the sonic performance that dictates the majority of our rating, and that is where the RT100 is sadly lacking.

The presentation is quite detailed and the balance is good: there are no sharp edges, and the bit of warmth it has over the Award-winning Sony PS-HX500, for example, is probably actually to our preference.

But all that good work is unravelled by the RT100’s sense of timing and dynamics.

Take Boards Of Canada’s Tomorrow’s Harvest, for example, and especially tracks such as New Seeds: the interlocking rhythms sound more like a corn popping in a saucepan than a composition curated by practised musicians.

The beat anchoring each bar is definite, offering some navigational tool, but the organisation of less pronounced rhythms is decidedly haphazard.

The performance is inoffensive and generally easy on the ear, but combined with a lack of acute dynamic awareness, it isn’t wholly satisfying either.

Of course, not every task the Roberts performs is quite so intricate or dependent on such nimble footwork, and it fares better when rhythms are more singular.

We play Radiohead’s Kid A and the RT100 appears to be more comfortable, using its general insight to dig out decent texture from the instruments and affording generous body to vocals.

Here it is mainly the restricted dynamic range letting the RT100 down. There is a labouring lack of expression that dulls the sense of the record, eschewing intensity in favour of maintaining the deck’s generally amiable character.

There’s much to be said for neutrality, particularly at entry level, but we need more before we can really recommend parting with your cash.

As its nearest direct rival, the Award-winning Sony PS-HX500 would be a tough opponent for any deck at this price, but there are a number of other options we would also take before settling on the RT100.

Audio Technica’s AT-LP5, for example, is a direct-drive alternative for only a marginally higher price, as is the AT-LP3, which can be found for as little as £150, though that lacks the capability to record your vinyl.

For separates, a Pro-Ject Primary with Rega Fono Mini A2D would also offer a considerable upturn in performance for £270.

The RT100 is generally well built and stocked with useful features. However, this is becoming an ever-more cluttered area of the market, and its sonic performance falls some way short of those at the top.

While the RT100 has its positives, there just isn’t enough for us to fully get behind.