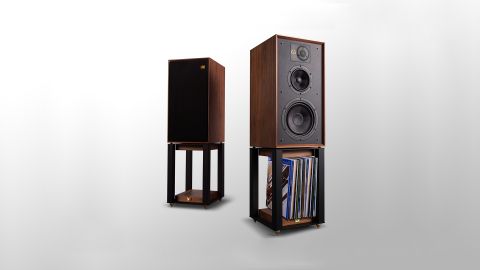 With retro good looks and a natural, relaxed sound to match, these Wharfedales are different, but undeniably superb

We often say that good sound doesn’t get old, but it does still date. Listen to hi-fi equipment from yesteryear and you might notice a different audio presentation more suited to the music from that era. In the case of the original Wharfedale Linton speakers, that era was between 1965 and the late 1970s – a time of big trousers, big music and big speakers.

Those original Lintons were 25-30cm across, depending on the specific model, and between the big enclosure, big front baffle and the big drive units that could be accommodated, they were able to produce a big, open sound that's very different to that produced by today's much more compact standmount speakers.

But what if you want a new speaker that's built using modern methods and materials, but that takes this old-school approach to styling and sound? Then you might well want the new version of the Linton, launched to celebrate Wharfedale's 80th anniversary.

Size and styling are the most obvious old school features of these Linton speakers. At just over 56cm tall, 33cm deep and 30cm wide, they’re significantly larger than most modern standmounters, but they surprisingly never feel overwhelmingly big, even in our relatively small listening room.

That’s partly down to their natural look with their matched wood veneers, available in a choice of mahogany or walnut. Were they finished in some kind of high gloss piano black or marble white, we imagine they’d shout a lot louder.

Their other weapon in keeping a low profile is the dedicated Linton stands, which sit the speakers at a slightly shorter height than some. Short enough, in fact, that those with a lower than average seating position will be the ones who hear the Lintons at their best.

Their disproportionate shortness notwithstanding, the Linton stands are excellent. They’re styled with a seamless look and feel to match the speakers and, while they cost £280 for a pair when bought separately, they can be bought in a bundle with the speakers for a premium of just £100.

Whether you appreciate the Linton aesthetic or not (we're very keen, for what that's worth), there are clear sonic benefits to this approach. A bigger box should make for more generous bass production, and the greater width of the Linton's baffle helps to add a bit more substance to the midrange by supporting the speaker’s output to a lower frequency. This effect, known as the ‘baffle step’ occurs at a higher frequency in slimmer speakers, and so they tend to sound less substantial, and that’s even with electrical compensation applied in their crossover networks.

A bigger cabinet can also accommodate bigger drivers. Bass frequencies are handled by a 20cm unit that's the same size as the bass driver inside the old Linton XP2s but this time utilises woven Kevlar instead of paper in the construction of its cone. A 12.5cm Kevlar midrange driver sits just above in its own enclosure, and slightly off-set to the inside edge is a 25mm fabric dome tweeter.

The cabinets themselves are made from high-density chipboard sandwiched between MDF skins to create a combination that Wharfedale says can scatter panel resonance better than MDF alone. Internally, the dampening material of choice is long-hair synthetic wool.

The Lintons are fitted with two rear-firing bass ports on each speaker. While they’re not too fussy about positioning, we’d recommend starting at around 50cm from the wall and moving in from there.

Unusually, they are designed specifically for use with the grilles on. Not only does doing so help to maintain that low visual profile, the grilles actually improve the sound thanks to their shape ameliorating interference from reflections from the edges of the cabinet.

The speakers sound best when slightly toed-in towards the listener, making sure that the Wharfedale badge is on the outside edge of each unit. That ensures that the off-centre tweeters are positioned on the inside edge, although as we play with the positioning, the difference between that and the other way around feels minimal.

It’s soon clear that these speakers have a relaxed way about them, so we pair them with the energetic Rega Elex-R integrated amplifier (£949). Other amps that offer a good degree of get up and go will also work well.

The moment we start our listening, we get a brilliant sense of scale and space from the Lintons and so we head straight for an orchestral recording to see what they can do. We play John Williams’s The Raiders March – the main theme from the Indiana Jones films – and get a thrilling sense of these speakers’ dynamics.

Starting quiet but firm with the plucky horn section, the piece when played through the Lintons offers a brilliant range of texture and ability as it builds. Striking up just to the side, the trumpets sound just as heroic as the archeological adventurer, while the string section launches in front. Underneath it all, the enormous hits on the kettle drums are reproduced with consummate ease by these big standmounters.

It’s such a fantastically open presentation of the music that our listening space feels bigger than it is. Every instrument is there to be heard in the soundstage. The harp strums float over the top, the timpani chimes in perfectly from the back left, the cymbal clashes and the tubular bells ring so true that we can almost picture the instruments. It’s quite joyous and, arguably, a demonstration of these speakers at their very best.

We switch to something more contemporary to the original Lintons - The Rolling Stones’ Jumping Jack Flash. The track is easily murdered by lesser speakers, but the Lintons excel. The tonal balance is spot on and no one instrument dominates – not Jagger’s voice, not the tambourine and not the drums. This recording can sound incredibly thin, but not here. It’s as full a rendition as we could hope for, but the speakers also have enough agility to keep the track from dropping into a melange of noise as it reaches its climax.

The Lintons’ ease at the bottom end really delivers. The bass guitar has a wonderfully rounded hum to its strings, quite separate to the weight of the kick drum. It drives the song along and you get a real impression of how exciting and rebellious this band must have sounded live, back in its pomp.

Lastly, we head for something more recent with Blinded By The Lights by The Streets and its bare, thumping bass. Through the Lintons it’s big, clean and as precise as we expect – just the bass, the snare and Mike Skinner telling the tale of a club night gone wrong.

It’s not as forward a sound as we’re used to from more modern speakers. They don’t throw the great thuds of the bassline at us like the equally brilliant but very different KEF R3s (£1300). The KEFs are probably a little more detailed but not to a huge degree, despite first impressions. Their more direct approach makes it easier to access, but almost all of that brilliant detail is still there in the far richer and wider soundstage of the Wharfedales - you have to go and get it.

In a sparse track such as this, it’s easy to prefer the KEFs’ presentation. They create a shade more nuance to Skinner’s voice and the shimmering synth. But the Lintons manage to do something that the R3s cannot: with that electro sample not quite so tightly focused, we get a magnificent, room-filling sense of the size and the feel of the club, right down to the strobe lights and dry ice taste in the back of the throat. Nostalgia kicks in. These speakers have done their job.

The Lintons may not be everyone’s idea of how they want to listen, but this is a taste that's worth acquiring. These speakers do an impressive job of capturing something of an older, fuller, more easy and open style of hi-fi sound without forgetting to make the music exciting. That excitement may not come thundering out of its cones, but you don’t need whisky and elbow patches to enjoy it either.

With effortless weight, spot-on stereo imaging and layer upon layer of marvellous detail, you could listen to these speakers for days and still not get tired. Just remember to change the record once in a while.