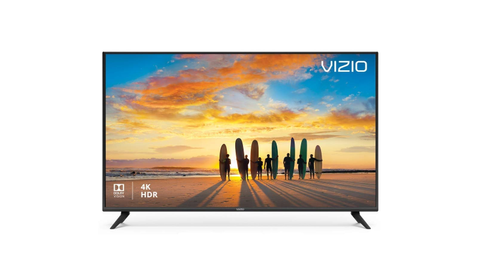 For a big screen TV at such a low price, the V505-G9 comes with more smart features than you'd expect, and a better performance, too

With a price tag of less than $500, what the 50-inch Vizio V505-G9 offers in features and performance is quite appealing.

While not advertised as part of Vizio’s SmartCast lineup, it does in fact offer all of the features that make the SmartCast line so appealing, including Google Chromecast support, a good selection of locally installed apps and Vizio’s dedicated channel of free streamable content.

It does pretty well in the performance stakes for this level too, offering a decent 4K picture, broad HDR support and a relatively attractive design, making it one of the better cheap TVs you can buy.

For a more basic model, the V505-G9 is fairly slim and stylish. The bezels aren’t as intrusive as we’ve seen on other cheaper models, and the construction is pretty sturdy, despite being made entirely from plastic.

Vizio has been clever with the design here, tapering the back of the cabinet to make it look less boxy than we often see at this level. This means the majority of the components sit at the widest edge along the bottom of the set.

The V505-G9 comes with a pair of plastic feet that sit at either end of the screen, or the TV can also be hung on the wall, as long as you don’t mind that its chunky lower edge means it won’t sit flush. You’ll need a 200mm x 200mm VESA mount if you want to give it a go.

The V505-G9 doesn’t spoil you with connectivity options, but what’s here should do the job. You’ll find three HDMI ports (one with ARC support), one USB 2.0 port, a coaxial connection and a composite video input.

Covering off the audio, there is an analogue output and an optical SPDIF port for digital surround sound.

For getting the TV online, you can use the ethernet port or the built-in 802.11ac wi-fi, but that’s as far as the V505-G9’s wireless capabilities go – there is no Bluetooth here for pushing sound out to headphones or streaming to the TV.

The V-Series model comes with Vizio’s SmartCast operating system, which comes with both niggles and benefits, but does pack in a whole load of features.

This includes support for a handful of good quality local apps, such as Netflix, Hulu, Amazon Prime Video and YouTube TV, along with free streaming services including YouTube, Crackle, Xumo and Pluto TV.

Vizio’s own dedicated channel, called WatchFree, also offers more than 100 channels of linear TV over the internet, plus Google Chromecast mops up any gaps of service compatibility by streaming straight from your device.

Navigating all of this is done with the included Vizio remote, which is the same basic model you'll see on any of the company's other TVs.

That’s both a good and bad thing. The buttons are easy to understand and work around, and there are six dedicated buttons to launch apps. That all sounds good, but the buttons are almost flush to the remote, which makes them hard to navigate, particularly in a dark room.

The picture on the V505-G9 isn’t going to blow you away, but it doesn’t do a bad job considering the price of the TV.

There’s decent handling of colour and brightness, with a full-array LED backlight and wide HDR support, covering off HDR10, HLG for broadcasts and Dolby Vision formats.

HDR performance is a bit of a mixed bag, but overall it’s not too bad. Highlights are strong and powerful as they punch through a dark scene, but shadow details aren’t quite as stark.

For example, a black suit against a dark night sky in Spiderman: Homecoming is difficult to distinguish, and the crushed blacks frequently leave darker scenes looking muddled.

We spot a couple of minor motion issues too, but it’s mostly unnoticeable during normal viewing, only really cropping up when the credits roll. We try the built-in motion smoothing but it doesn't solve the problem entirely.

Gamers may want to skip this TV as a gaming monitor if they’re serious about 4K gaming. While it supports 10-bit colour and Dolby Vision, 4K gaming is limited to 24Hz, which is a real problem.

For a TV with only two 10-watt speakers, the sound quality from the V505-G9 isn’t too bad at all, offering a decent amount of clarity and volume that you can push to pretty high levels, with only some clipping at the very top.

Strangely, though, once you've turned up the speakers to around 75%, you won't get much more volume out of them, even as you creep closer to 100% volume. A soundbar is still the recommendation here, then.

The inclusion of Vizio's SmartCast software only bolsters this good performance, with free streaming content, built-in Chromecast and compatibility with Amazon and Google smart speakers.

We’d still lean towards the TCL 43S517 Roku TV for the very best in affordable TVs, but this V-Series from Vizio is a close second. If you’re looking for an affordable 4K TV with great features and strong performance,  the Vizio is an absolute bargain.