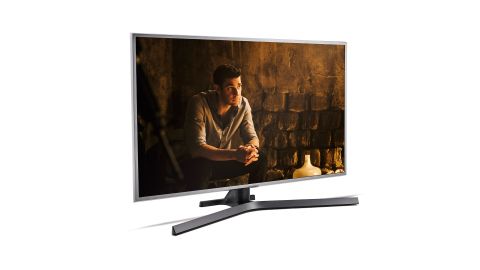 Sophisticated picture technology at an affordable price; this is the best budget small TV around right now

The Samsung UE43RU7470 seems like impossibly good value. It ticks all the right tech boxes – HDR, 4K, an excellent smart platform and arguably the best TV user interface around – and all for just £429. At 43 inches, the UE43RU7470 is also a sensible size, potentially making it the kind of all-rounder that could be equally at home in the bedroom or living room.

It’s worth noting that the Samsung UE43RU7470 is a Currys exclusive, though Samsung says it is technically identical to the other TVs in the range, including the UE43RU7400 and UE43RU7410. While this is likely to be true, we cannot confirm that the performance will be identical. So, this review refers specifically to the Samsung UE43RU7470.

While it isn’t a premium Samsung TV, there’s nothing that feels cheap about the RU7470. At just shy of 6cm, it is still reasonably thin and nicely finished on the front and rear, much like the expensive QLED sets, although at 1.5cm, the bezel is considerably broader than those of the QLEDs.

The large silver boomerang of a stand not only looks a bit daft, but also gives the TV a much bigger footprint than it needs. It may look better on the larger screen sizes of the series (50in, 55in and 60in), but on the 43in model, it’s almost as wide as the screen itself. On the plus side, the rear of the stand is hollow, leaving plenty of space to run your cables through and keep the back of your set tidy.

Compared to other models in the series, the UE43RU7470 has a shinier stand and more metallic look finish. The superb One Remote is, again, a more classy metal rather than the black plastic of the standard Samsung UE43RU7400.

As with all the models in the range, there are three HDMI 2.0 ports, two USBs and an optical audio-out around the back, as well as ethernet and aerial sockets. It is, of course, wi-fi-enabled, too, which is handy because the RU7400 series features Samsung’s superb TV user-interface and smart platform. On it, you’ll find all the video apps you’re likely to need – Apple TV, Google Play Movies, Netflix, Amazon Prime Video, Rakuten and all of the TV catch-up services.

Everything that should be delivered in 4K with HDR is, with the TV supporting HDR10, HDR10+ and HLG. There’s no Dolby Vision, though, which is a shame, but also the norm for Samsung TVs.

Like most of Samsung’s 2019 TVs, this set has the Bixby voice assistant built in. Talk to the remote and you can change the volume and switch channels and inputs. This gets better if you add the TV to a list of smart devices on your SmartThings, Alexa or Google Assistant platforms. That way you can use the Bixby function to voice activate other smart devices on your network.

We slot a 4K HDR edition of Life Of Pi into our reference Blu-ray player to enjoy the colour and warmth of Ang Lee’s adaptation of Yann Martel’s novel. Our first impression is that Samsung has done a decent job with the Samsung UE43RU7470, focusing on a more subtle and sensible picture performance than trying to wow viewers with punchy big hits.

Compared to Samsung’s more expensive TVs, the UE43RU7470 is not blessed with peak brightness, which is worth considering if you’re planning on using it in a brightly lit room or next to a window. You’ll still get a decent image but you may find moments when you can’t jack up the picture sufficiently.

Instead, what you get is tighter image control where it counts thanks to the excellent micro-dimming technology. Watching the scene where Pi Patel’s uncle, Mamaji, has his inspirational swim in Paris, we’re delighted by the Samsung’s performance. The wide shots of the pool are superbly controlled for a TV at this price point.

There’s a proper sense of depth to the image, with excellent shading in both bright and dark areas of the picture. Clouds look three-dimensional with enough grey and white detail to produce natural-looking billows.

At the far end of the complex, the shaded balustrading pops neatly against the dark backdrop of the shadowed staircases and balconies. There’s a genuine sense of it being further away than the Parisians sunning themselves on the terrace in the foreground, and that’s not an easy effect to achieve at this relatively small panel size.

Colour is almost equally impressive. The brightness levels bring it short of a truly vivid experience, but there’s a richness and variety that Samsung’s Dynamic Crystal Colour technology helps create. The water, parasols and floor lines of the building are a pleasing aquamarine, produced with a realistic variation of tone. Combined with its well-measured contrast abilities, it makes for an organic looking and inviting picture.

We switch to Ant Man on Blu-ray and, with an SDR 1080p image, the colour tails off a little. The palette is much more muted, with Dr Pym’s suit a slightly murky brown and his daughter’s red lipstick a touch less stunning.

The upscaled detail is incredibly impressive, though. The fine striped detail of Pym’s jacket material comes out nicely and the lines of Michael Douglas’s face never blur even during moving close-ups. Like the very best TVs, at a glance, it’s easy to mistake the image for native 4K.

But at SD levels, there’s an expected drop in resolution. We play The Wrestler and the skin details disappear as everything is smoothed out, but with nothing too pixellated, we could happily enjoy the film from start to finish.

The sound from modern flat panel TVs is rarely superb, not without assistance from a home cinema package or soundbar anyway. So, we’re not expecting great things as we listen to 10W of amplification powering the two speakers on the back of the Samsung UE43RU7470. However, we play the storm scene in Life Of Pi and are actually quite impressed.

There are three major sound modes – Standard, Optimised and Ambient – each highlighting different parts of the soundtrack. Standard is the one we’re happiest with for films. It’s lacking at the bottom end and there’s no real surround element, but it’s where the audio is best for dynamics and detail.

Ambient mode boosts the midrange at the expense of some detail and dynamics, but also pushes the soundstage out further and adds a more immersive and arguably more cinematic feel. It’s also the best setting for listening to music.

Optimised allows the TV to perform an analysis of your environment and adjusts the sound to suit your room. In our tests, it never quite works, maxing all the frequencies out into a bit of a blur of noise and echo, and is best avoided.

Ultimately, we’re left with the usual conclusion – while this set sounds absolutely fine, even a budget soundbar will improve the audio dramatically.

For a size of TV that is all too often overlooked, we’re delighted to see that Samsung has served up a stunner for the average household with the modestly priced and brilliantly performing UE43RU7470 range.

With strong attention to detail, a broad range of colours and brilliant upscaling; you won’t find anything better at this price. And with Black Friday around the corner, it's a good time to be keeping an eye out for 4K TV deals and an even bigger bargain...