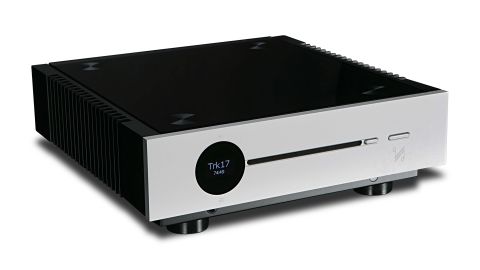 If you’re after a versatile and talented source component that can also act as your system’s hub, the Quad Artera Play+ is it

To call Quad’s Artera Play+ simply a CD player is to undersell its range of abilities. Think of this not just as a disc source for your system but also its hub.

With analogue, digital and aptX Bluetooth inputs also included, this is a component of considerable versatility. Just add a power amplifier and speakers to complete the system.

We reviewed the original Artera Play back in 2016 and, on the surface at least, little has changed. The Play+ looks identical apart from the addition of a discreet (and capable) 6.3mm headphone output on the front lower lip and a small aerial for Bluetooth.

It’s still a superbly made unit that feels solid and classy. While the 32 x 32cm footprint invokes memories of Quad classics from the past, this is a cutting edge unit and is available in either black or silver finishes. We particularly like the glass top panel. It adds a touch of class that most rivals lack.

There are basic controls on the front panel, but the essentials are included here and the remote handset is nice to hold and easy to use.

Take a look inside and you’ll find the same highly-rated ESS Sabre ES9018 DAC as before. This chip allows the unit to handle pretty much every file format out there from 32-bit/384kHz PCM all the way up to DSD 256.

While the Play+ isn’t a wholesale change on what went before, Quad has taken the opportunity to improve the performance. There are changes to the post-DAC analogue filter circuit including the use of better op-amps.

The Play+’s power supply has also been improved with a larger toroidal transformer and independent low noise power feeds to sonically important sections of the circuitry to maximise sound quality and keep unwanted interaction to a minimum.

There are also small tweaks to the analogue circuitry between the DAC and the balanced XLR output for the same reasons.

Connectivity is excellent, with two pairs of RCA analogue inputs alongside two opticals, two coaxs and a USB. There’s aptX Bluetooth of course and the option of both single-ended and balanced analogue outputs.

Should you want to use an external DAC – though we’re not sure why you would, considering the one built-in is so good – then you can connect via optical and coax digital outputs.

The Artera Play+ looks like a winner on paper, yet we’re still concerned. The original looked equally as promising but failed to impress us on audition. It sounded refined and decently detailed but lacked excitement.

It takes no more than a few seconds to realise than this new one is much better. We start with Prince’s Diamond And Pearls on CD and the Quad sounds right at home. The company has never gone for a bombastic approach to music replay, so it comes as no surprise to find that the Play+ doesn’t take this approach either.

It’s a detailed and even sounding performer that presents music in an unforced and refined manner. Where this new model differs from the original is in the way it still manages to communicate the energy and sparkle in the music.

The hit single Gett Off sounds as funky as it should with the Quad keeping a firm grip of the hard-charging rhythm track. CD-playing rivals such as Cyrus’s Award-winning CDi sound even more lively and punchier in the bass, but the Quad still manages to entertain hugely. It’s subtle and insightful, and able to keep track of the song’s multitude of musical strands without sounding confused. Most importantly, it's fun to listen to, something that the original simply wasn’t.

Moving to Hans Zimmer’s Gladiator OST shows that the Quad is capable of strong dynamic swings and a decent sense of scale. It doesn’t sound quite as authoritative as some rivals, but has a sense of balance where every aspect of the sound is nicely proportioned. There’s excellent refinement and a freedom from harsh edges that’s really appealing as well as an ability to paint instrumental textures in an understated but convincing way.

We try out the digital inputs and find that the internal DAC is a good one and that the sonic character of the inputs is consistent. This isn’t always the case, so we’re pleased that Quad’s engineers have managed to make it so. The Artera connects to our Mac laptop without fuss and handles files of many different formats. If you have a collection of music files we doubt that the Quad will have any issue playing them.

Similarly, Bluetooth works well too. There’s the expected drop-off in quality compared to the traditional wired hi-fi connection, but as we listen to Low’s Secret Name via Tidal, we don’t mind because it all sounds so pleasant and interesting. There’s all the tidy presentation we expect of a Quad product but here it comes with a level of expression and involvement that hasn’t always been there.

If you’re looking for just a CD player at this level, this Artera Play+ certainly deserves its place on the shortlist just behind class leaders, such as the Cyrus CDi. However, if you’re after something more versatile, then get straight down to your Quad dealer and buy this. You’ll be pleased you did.