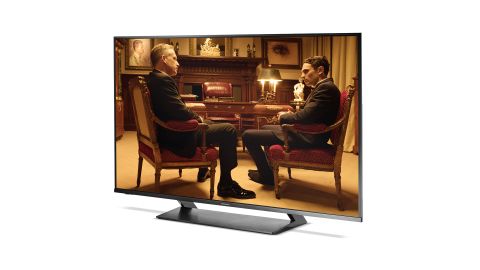 A big, budget TV with excellent features and an impressive, natural picture performance. What’s not to like?

We love how much effort Panasonic has put into the GX800.

While most manufacturers simply remove a load of flagship features and push their midrange TVs out to market almost hoping no-one notices, Panasonic has packed this set with fancy features (most notably Dolby Vision and HDR10+), has priced it incredibly aggressively, and sent us no fewer than three size variants to be picked apart.

The effort and confidence has already been rewarded in the form of a five-star review of the 50in model, but can that form continue when scaled up to the rather unusual size of 58in?

Yes, it can. In fact, the TX-58GX800B is actually even better value than its smaller sibling.

It must be hard to make a big slab of screen look stylish, and it feels like Panasonic hasn’t wasted time trying to do so with the GX800. This is an exceptionally simple, staid design consisting of slightly glossy black bezels and a matte black stand.

Panasonic has long gone for the utilitarian look, keen that its performance does the talking, and the GX800 typifies that approach. Sure enough, the chassis takes no attention away from the display, with those thin black bezels disappearing in a dimly lit room.

The use of an edge LED backlight allows the set to remain very slim on the whole, and even at its thickest point it’s not particularly chunky, measuring a perfectly acceptable 6.5cm. Should you be placing the TV on a piece of furniture, the pedestal stand gives the TV a fairly compact footprint of 53 x 26cm.

Around the back and to the left-hand side of the TV you’ll find three HDMI inputs, two USB sockets, ethernet, component video, optical out and a dedicated headphone output, as well as an aerial socket for live TV.

The current TV norm is for there to be four HDMI sockets, but we don’t imagine many people finding three to be too few.

It’s also worth pointing out that the only HDMI 2.1 feature supported by these HDMI 2.0-certified sockets is ALLM (Auto Low Latency Mode), which senses when a games console is connected and automatically switches to Game mode. VRR (Variable Refresh Rate) and eARC (Enhanced Audio Return Channel) are not on board, though standard ARC is.

Far more exciting on the features front is the inclusion of both of the currently available dynamic metadata HDR formats: Dolby Vision and HDR10+.

While Dolby Vision is far and away the more prevalent of the two formats, with HDR10+ more or less limited to a handful of 4K Blu-rays and a bit of content on Amazon Prime Video – which actually still prioritises Dolby Vision when content is available in both formats ­– it’s great to know that you’re covered either way. Standard HDR10 is supported as well, of course, as is HLG.

On top of Prime Video, the GX800 also offers Netflix in 4K and Dolby Vision, and all of the UK’s core catch-up apps (BBC iPlayer, ITV Hub, All 4 and My5) are present and correct. Unfortunately, the only pay-as-you-go movie-streaming app on board is Rakuten, and this is not in 4K or HDR, despite the labelling suggesting otherwise.

All inputs, apps and other features are accessed via Panasonic’s own operating system, called My Home Screen. It is vastly less snazzy than the rival systems offered by Samsung and LG, but is at least straightforward to navigate and pretty fluid in action.

For many, the appeal of Dolby Vision is the idea that you’re seeing a film or TV show exactly as intended, but we still find the default Dolby Vision settings too soft and warm.

The good news is that, while some Dolby Vision settings are locked, you can adjust others, and by upping the sharpness and moving Colour Temp from Warm2 to Normal we’re able to get the punch and crispness that we enjoy while watching standard HDR10 with the extra, adaptive contrast offered by Dolby Vision’s dynamic metadata.

We spend our first couple of hours with the GX800 with the Spider-Man: Homecoming 4K Blu-ray spinning, switching the TV’s Dolby Vision feature on and off to compare the picture performance. Having it switched on clearly produces the subtler, more nuanced image.

The GX800 obviously has a fairly narrow contrast band to work with, and Dolby Vision makes the most of this, combining highlights and lowlights in a really balanced way and revealing fine details at both ends of the spectrum. Switching Dolby Vision off often results in a slightly brighter image, but it’s tonally flatter and a tad less insightful.

That isn’t to say the GX800’s performance with standard HDR10 content is poor. In fact, compare it directly with similarly wallet-friendly rival models and it’s a clear step up. While many such rivals tend to exaggerate colours and edges for maximum impact, the GX800 plays things far more even-handedly and is infinitely preferable over time.

Colours are brilliantly judged, proving tonally natural and nuanced in their gradients. Subtle shades are smoothly blended and avoid the sort of blocking produced by less sophisticated sets, and that makes skin tones in particular appear natural and realistic.

Ultimate brightness isn’t exceptionally high, particularly when compared to more expensive models, but the Panasonic works well within its limits, delivering plenty of bright detail and nicely clean whites. Black levels are a bit limited, too, but no more so than those of other edge-lit sets at this end of the market.

The Panasonic’s backlight is actually far more uniform than most, with no blotchiness or clouding, although there is an obvious, thin band of light visible from the edges of the display, which is a bit of a shame. The black bars of a widescreen film aren’t terribly black, either.

Motion is very good, though, so long as you turn the Intelligent Frame Creation down a little. On its default Mid setting, this motion processing is easily confused by tricky movement and makes everything look overly processed. But drop down to Min and you get a very effective balance of sharpening, smoothing and naturalness. We’re not quite talking Sony levels of motion excellence, but it isn’t a long way off.

Switching to Fargo on 1080p Blu-ray, the Panasonic, if anything, is even more impressive. With SDR content, the GX800’s ultimate brightness limits aren’t so much of an issue, so it’s more or less as punchy as many more premium models. The image is once again fabulously natural in terms of colours, crisply defined without looking over-enhanced, and packed with detail. There are no flaws or inconsistencies to act as distractions, so you’re free to simply enjoy the film.

Drop down to BBC local news in standard definition via the built-in Freeview tuner and the results are perfectly watchable. Colours are bright and vibrant without veering into garishness, and noise is kept fairly well in check considering the low resolution of the signal.

Those eyeing up the GX800 as a large, affordable gaming monitor will be pleased to hear that, while the set doesn’t support VRR, it does boast very low input lag. We measured it at 14.6 seconds, which isn’t far off the lowest current TVs are able manage.

One last thing to bear in mind is the viewing angles, which, while better than those of most similarly priced TVs and actually a little better than those of the smaller GX800 models we’ve already looked at, still aren’t amazing. Those who watch the lounge TV from the wider corners of the room simply won’t get an optimal performance.

Just like its 50in sibling, the TX-58GX800B produces clear voices with plenty of detail, as well as a nicely open and spacious soundstage, particularly when the Dolby Atmos mode is enabled.

That said, audio isn’t projected terribly far into the room and there’s not a whole lot of weight or depth to bass. It really is worth adding a dedicated sound system, even if it’s only an affordable soundbar.

The 50in version of the GX800 is great, and this 58in model offers all of the same qualities in a significantly larger size for very little extra money, making it even better value when compared to rival sets.

If you’re in the market for a big, affordable TV, the TX-58GX800B should be right at the top of your list.