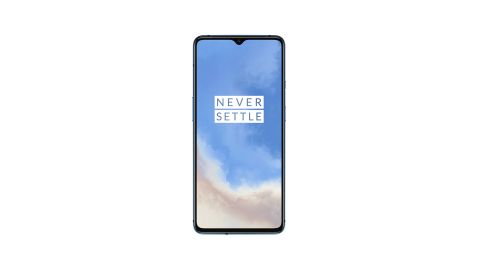 When OnePlus’s CEO Peter Lau announced the release of the 7T, we had already spent a week in its company – but as we noted in our positive hands-on review, we were without a crucial piece of information: the price. With the price now revealed as ‘from £549’, we can now bring you the whole picture.

The 7T replaces last year’s 6T in OnePlus's circle of life, which sees new phones launch every six months. It is set to compete with smartphones such as the Google Pixel 3a and Huawei P30 in the mid-market by borrowing much of the technology found inside its successful siblings and updating it with new features and the latest software.

The Chinese brand has perhaps made the biggest leaps in camera technology, although upgrades across battery, screen and software all combine to provide a worthy upgrade.

While we liked the Nebula Blue finish offered by the 7 Pro, OnePlus customer feedback has led the company to finish the 7T’s matte-frosted glass body in a lighter-hued ‘Glacier Blue’. The similarly smart ‘Frosted Silver’ is the alternative colour option.

Owners without a protective case will find themselves regularly wiping away fingermarks from the back panel, but otherwise, it looks and feels like a premium device. The 8mm-thick chassis is sleek and appropriately weighted, and while we are fond of the 7 Pro's curvaceous screen edges, we expect their absence here won't be widely missed.

A triple-camera arrangement now sits within an unusual spherical notch with a dual-LED flash – the most visually striking part of the design – and it’s not surprising that the front of the handset is almost entirely screen. You have the water-drop notch for the front camera, but it’s 31 per cent smaller than the one on the 6T.

The 7T is, alongside the 7T Pro, the first phone on shelves preloaded with Android 10 OS – formerly code-named ‘Android Q’ and marking a departure from the usual dessert names. Android 10 waves goodbye to the three-button navigation of old and instead goes all in on gestures. You swipe the bottom of the screen to get around your windows, for example.

Oxygen 10.0 – OnePlus’s own skin – has been designed to complement the Android design, bringing a few features on board in its new guise. For example, the Gallery app now has hidden albums, a ‘Smart Album’ that automatically generates video collages from your library, and improved sort and search with scene and facial recognition features. And one for millennials: Zen Mode, which disables notifications and some apps in order to enforce a phone-free period.

Powering the handset is Qualcomm’s Snapdragon 855+ chipset, promising small CPU speed upgrades and a 15 per cent faster graphics rendering over the 855 chipset found in several premium 2019 handsets, such as the 7 Pro, Samsung Galaxy S10+ and LG G8 ThinQ. Regardless of numbers, the 7T never feels like it is struggling to keep up, the operation is swift and loading times brief.

To cater for that extra demand, there’s now a bigger battery (3800mAh – slightly up from the 6T but below the 7 Pro’s 4000mAh), which can be replenished faster than any OnePlus phone battery before it, courtesy of the all-new supplied Warp Charge 30T charger. Supposedly 18 per cent faster than Warp Charge 30, and arguably one of its most practical features, it charges the 7T to 70 per cent in just half an hour.

Lastly, the OnePlus 7T has a bigger RAM: 8GB over the 6T's 6GB – another one-up that represents the progress OnePlus has made both in the last year since the arrival of its 6T and in the six months since the 7.

The 7T’s Fluid AMOLED display doesn’t sport the 7 Pro’s near-4K resolution screen (it’s a reasonably modest 2400 x 1080 instead), nor does it quite match it for size (it’s 6.55in, just shy of its sibling’s 6.67in). But it does carry over the 90Hz refresh rate, which is good news for gamers in particular, and with HDR10+ support and a cinematic 20:9 aspect ratio, the 7T still has more than reasonable movie-watching credentials.

Its 1000-nit maximum brightness promises lucidity even in bright daylight and striking highlights in HDR movies. OnePlus has also implemented an internal luminescent material underneath the screen that claims to block 40 per cent of blue light for a more comfortable screen experience at night.

While you shouldn’t expect the same crispness and depth of detail as the top-tier Samsung Galaxy S10+ and new Apple iPhone 11 Pro, the 7T provides an impressive screen performance for a mid-market handset. The 7T eclipses the Pixel 3a XL's display performance with a more realistically-hued palette and crisper delivery.

Both have the dynamism to do the colourful production of Strictly Come Dancing justice, but whereas the Pixel wins for absolute richness, the 7T’s colour reproduction is a little more grounded and natural – reds are deeper, and beiges are less yellow-tinged. As with the 7 Pro, ‘Vivid’ is our screen mode of choice for watching TV shows and films, offering a punchier, more compelling watch than the more blanched ‘Natural’ alternative.

The 7T comes second in the head-to-head when it comes to dark detail, though, which makes a difference when you’re watching something like What We Do In The Shadows with its many shots in dimly-lit environments. Still, contrast is excellent and overall cleanliness, detail and motion performance is very good indeed.

OnePlus ditched the 3.5mm jack on last year’s 6T and the 7T advances the company’s promotion of wireless headphones or USB-C-ended digital alternatives. Again, like its sibling, it offers a decent and competitive performance where clarity and weight are concerned.

It is a rhythmic and entertaining listen – more so than the slightly flatter-sounding Pixel 3a XL – although space and expression don't get close to the levels offered by the class-leading Apple iPhones of recent years. Ultimately, it sounds perfectly fine for a mid-market smartphone, although those wanting to use their phone as a hi-res streaming source playing, say, Tidal Masters streams may want to look into investing in a portable DAC.

Dolby Atmos support works to create a virtual surround sound from the 7T’s built-in speakers, which here translates to a bigger, slightly more spacious delivery when we stream content, as it does on most Atmos phones. Just don’t expect much in the way of surround sound.

One of the 7 Pro’s most impressive features was its triple-lens camera system, so we’re pleased OnePlus has stuck with it here, advancing on the 6T’s dual-camera configuration.

The main snapper is the same 48MP Sony IMX586 lens (complete with optical image stabilisation) found in the 7 and 7 Pro, while the 16MP ultra wide-angle lens, capable of capturing a 117-degree field of view, has also been carried over. The 7T’s telephoto lens with 2x optical zoom has gained in pixels over the 7 Pro (it’s now 12MP over 8MP), and the front 16MP snapper returns to a small notch design rather than being housed in an ambitious pop-up camera module.

Tweaked hardware is accompanied by additional software features, such as a Macro Mode and focus sensor that let you take close-up portrait snaps from as little as 2.5cm away. The 7T does well to focus itself for clear close-up capture, whether you’re trying to capture a grain of rice or something as large as a plant.

Arguably the 7T’s most effective camera function, though, is the Night Scape mode for better capture in low-lit environments. It’s a welcome offering on both the main and ultra angle wide lens in an improved guise, and is a true asset when snapping a gig or nighttime landscape. There’s clarity to the image, though it is somewhat inauthentic.

In daylight or well-lit conditions, however, the 7T holds a candle to the best phones around, largely on par with the Pixel 3a XL, capable of producing bright, detail-packed photos that you won’t feel the need to tinker much with.

OnePlus may be slowly increasing the asking price of its handsets, but it’s packing in more tech too and rapidly closing the gap between mid-market phones and their flagship equivalents at twice the price.

Like the 7 Pro before it, the 7T is a great value mid-market marvel and certainly one that deserves consideration.