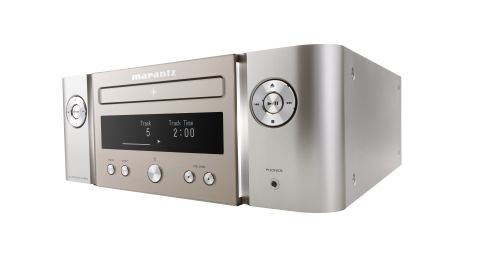 It seems eons since we reviewed – and, largely, praised – Marantz’s network CD receiver and streaming box of tricks, the Melody and, to be fair, it was nearly four years ago. Back then, the M-CR611 gained a highly commended four stars. Its predecessor, the M-CR610, had gained five stars two years previously.

What’s changed with the newest of Marantz’s diminutive wireless music systems, the Melody X, or – if you don’t want to confuse your kit with a Bonaparte song – the Marantz M-CR612? Well, visually Marantz has done away with the four colour options on the two vertical front light panels on either side of the display. Now, either On or Off (in white) is your lot for getting the party started – this is a serious wi-fi streamer with built-in amps and a CD player, not a boom box.

You don't need a Marantz HiFi Remote App any more, and the two USB ports (one front, one on the back) for iPod/iPhone support are also gone, as is the AM radio tuner. But come on, this is 2019. What you do get is a programmable timer, TuneIn Internet radio, Pandora, AirPlay 2 support and Heos wi-fi connectivity, so Spotify Connect, Tidal, Deezer and Amazon Prime Music are all on the table – and you can also use Alexa, Google Assistant and Siri virtual assistants to control the system through their respective apps.

We quickly hook the Marantz straight up to our compact Dali Oberon 1 standmount speakers – it stands to reason that a space-saver such as the Marantz Melody X would be paired with similarly compact (but sound-savvy), price-compatible components.

We begin by simply checking that everything works as expected. The disc we slip into the CD player (The Stranglers’ Norfolk Coast) plays with ease. We connect to wi-fi and switch to internet radio and TuneIn Radio dutifully pipes up. We flip to the Bluetooth input and pair our iPhone 7 without a hitch Spotify streaming is then at our disposal just by prodding the Marantz under ‘Devices available’ on Spotify’s interface. Another playlist is easily played back over Bluetooth.

On Apple Music, we locate a downloaded album, hit the little AirPlay 2 icon on our phone – and it plays through the Marantz. Changing to the Music Servers menu on this little magic box, the Melody X duly locates our laptop and Naim Uniti Core as potential music sources, gamely playing the first thing we select via the latter, Prince’s 3121. It’s just so easy. You won’t have to squat down near the little unassuming glossy box to switch music sources either; there are eight dedicated source buttons at the top of the supplied RC014CR remote to click on.

The Melody X is one of a refreshing group of products requiring very little physical set-up to become the all-singing, all-dancing and (crucially) fully-functioning article.

If the build doesn’t feel rock solid, the unit being largely high-gloss plastic, at this price it’s acceptable. The remote is sensibly laid out and easy to use.

There's high-res audio support up to and including 24-bit/192kHz and double DSD (5.6MHz), and the M-CR612 has four channels of power amplification – meaning you can drive two different pairs of speakers in different rooms and adjust their volume independently. Alternatively, you can bi-amp or double the output power to one pair using the system's PBTL Mode - well worth doing if you've got just a single pair of speakers connected, thanks to the general increase in sound quality. If you do have two pairs, simple switch from ‘PBTL’ to ‘A and B’ through the set-up button – the volume is ample and it's easy to switch between speakers using the remote.

With Heos built-in, the Marantz can search for other Heos-compatible products (from a ‘Heos favourites’ tab on the input menu) to set up a multi-room system with other Denon or Marantz products, too.

We begin by streaming Snoop Dogg’s Who Am I (What’s My Name?) on Spotify, and a performance that’s clear and open through the midrange greets us. It easily copes with our medium-sized test room. Snoop’s characteristically laid-back vocal is competently dealt with, but here there is a shortfall: while the Marantz doesn’t ignore the lower registers, it isn’t exactly weighty or authoritative through them. As a result, the beat feels somewhat incidental; it doesn’t feel like it’s driving the track quite as it should.

Switching to our Naim Uniti Core music server, Prince’s The Word awaits. It’s a layered and expansive performance, with ample space for the drums, rhythmic guitar, triangle and horns to be individually felt and enjoyed. When Prince’s silken vocal comes in, the precision of the stereo imaging as he appears to stalk between our two speakers, singing seductively into each one, is decisive. We would like a little more excitement though. The Marantz plays things a little safe, so robbing the music of some of its drama.

To test the Melody X’s CD-playing game, we load up The Beatles’ Magical Mystery Tour. During The Fool On The Hill, the recorders come through with carefree petulance and intentional childlike inaccuracy; always set apart from the more refined, softer flutes as McCartney’s chorus ends. When it comes to refinement the Melody X does well.

As a mini-system, the Melody X is a good option for those who already have a pair of speakers (or even two pairs) they’re attached to – or are desperate to invest in. The midrange is fairly detailed and open, and the CD player completes a mix that has plenty of appeal.

This is a neat, impressively featured package but, as a piece of dedicated listening equipment in its own right, the sonic balance isn’t quite cohesive enough to have us truly engrossed.