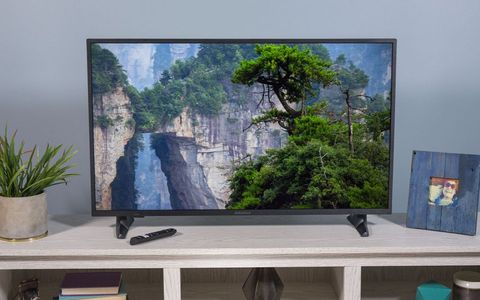 Up until now, it’s been a real shame to see Amazon’s capable, and promising, Fire TV OS held back by less-than-stellar 4K TVs from brands such as Westinghouse and Toshiba. For all that good software matters in a great TV, if the hardware isn’t there to back it up, it’s not going to be something we can recommend.

The 43in Insignia 4K Fire TV Edition (NS-43DF710NA19) has set out to change that. Best Buy’s TV brand offers a decent backdrop to Amazon’s fledgling OS, instead of its usual Roku operating system, and while it isn’t perfect by any stretch, it does at least offer a good picture for a smaller set.

There’s very little to write home about when it comes to the design of this set. Its bezels are slim enough, but it doesn’t try to hide its budget roots, with brushed black plastic the overwhelming theme of the set.

That even follows down to the feet, which are also chunky and cumbersome. They do, at least, sit perpendicular to the display instead of at an awkward angle, which so many budget TV brands prefer. A small victory, but at this price, it’s one we’ll celebrate.

The display itself is on the thick side too, measuring 3.2 inches. It isn’t the most attractive set we’ve seen, even at this price, but that isn’t something you’d particularly notice when viewing the TV from the front.

The plastic construction does at least keep the TV lightweight, at just under 20lbs - it's manageable for one person to assemble and move.

On the left hand side of the TV you'll find two panels of inputs. Two HDMI ports (one of which has ARC support), a single USB port, and a headphone jack for audio output face out to the left (useful when wall mounting), while a second, rear-facing panel offers a third HDMI port, an RF connector for antenna and cable, a composite video input, a digital optical output for a soundbar, and an ethernet port.

As smart TV platforms go, Fire TV OS is actually pretty good. It offers most of the apps you'd want and expect, including Netflix, Hulu and HBO (both HBO Go and HBO Now), as well as the full complement of Amazon Prime Video.

Alexa is built in to the TV, which is like having an(other) Amazon Echo and offers all the same functionality, including smart home control, without the need of an extra device. The mic is in the remote though, as the TV lacks the far-field mics that allow Alexa to hear you from across the room.

The huge amount of content there is on offer here is great, but the actual process of finding it is likely to be frustrating. Searches are difficult without a specific app name, and the category-based browsing offered in the app store could be better implemented.

The other big sticking point is advertisements. Every smart TV platform offers up some sort of recommendations for sponsored content, but Amazon's addition of retail ads is just a bit annoying. You can expect to see products — usually pulled from your own Amazon shopping history — wedged in among the apps and shows on the home screen.

There are some TV-specific buttons you won’t find on the regular Fire TV remote, such as volume controls and a live TV button. There are also four buttons for quick access to Amazon Prime Video, HBO, Netflix and PlayStation Vue.

From a quick look at the specs, things don't look hugely promising for this TV – a 43-inch 4K display with a 60Hz refresh rate and limited HDR capability isn’t something that sounds like it’s going to be particularly impressive.

However, the Insignia's picture performance is actually a very pleasant surprise. Watching scenes from Spider-Man: Homecoming, it offers vibrant colours and pretty smooth motion considering it’s only a 60Hz panel.

In a scene in which Spider-Man climbs the Washington Monument, the blue skies and green lawns of the National Mall are reproduced with decent accuracy, and the reds and blues of Spiderman’s suit also look true to life. While it isn’t going to bother pricier sets for absolute colour accuracy, it certainly looks to be the most accurate Amazon TV we’ve tested.

Switch to a night shot of a Marvel-inflected Manhattan, and we are also pleasantly surprised by the brightness of the city lights, particularly on Avengers Tower.

Further testing proves that this good first impression is no fluke. In Blade Runner 2049, close-ups of faces and hands demonstrate realistic flesh tones, and there's none of the banding we often spot on budget displays.

That's not to say there aren't negatives. HDR support is limited to HDR10 for a start and, with no local dimming, the effect isn’t as impressive and you’d want from an HDR-capable TV.

There are also moments that light spills from light objects into areas that should be almost entirely black, affecting the overall contrast performance. That said, it’s about on par with other sets we’ve seen at this price, so it’s hard to criticise it too much on this specific aspect.

Viewing angles are also very limited. Even when sitting directly in front of the screen, minor color shifting at the very edges of the panel is noticeable. Move to a 45 degree angle and this discoloration covers almost half the screen, meaning a second viewing position would get a much reduced performance.

For such a small and inexpensive TV, the sound on offer here is actually pretty good. It’s largely free of the lightweight audio that we often hear in the sub-$500 range, with the TV’s two 8-watt speakers offering fairly rich sound – it just doesn’t go particularly loud.

Listening to Jumpsuit by Twenty One Pilots, the Insignia manages to produce relatively clean treble and a decent amount of bass, considering this is a TV with no subwoofer. However, start to push the volume (which you are inclined to do considering it’s on the quiet side), and even at 40 percent volume, the bass starts to sound pretty distorted.

All things considered, and while it isn’t a bad performance for the price, we’d still recommend finding room in your budget for a soundbar.

The Insignia 43in 4K Fire TV Edition (or, the rather less catchy NS-43DF710NA19) is the first TV packing Amazon’s Fire TV OS we’ve seen that we’d recommend. It’s cheap for those on a budget, and while it’s not category leading, its performance is still pretty good for the price, particularly in terms of the picture.

Away from the core functionality, having all the power of Alexa built into a TV is a pretty compelling feature, and one many people will find useful - especially at this price.

While it still needs a bit of polish, with some time and attention, the Amazon Fire TV OS could well be a fantastic operating system for the budget market – and maybe even the flagship one too.