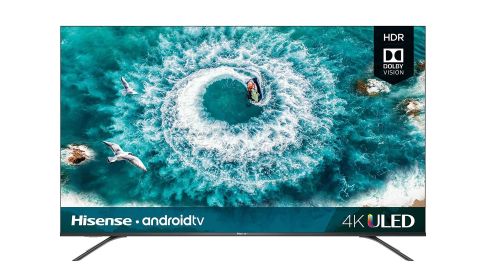 The Hisense 65H8F offers great clarity and good color reproduction, but is held back by inconsistent backlighting and middling sound quality

If you’ve got less than $1,000 to spend on a big screen TV, the unfortunate truth is there are usually some compromises to be made. Look for one under $700, and there are often even more.

The 65-inch Hisense H8F Android TV does a good job of balancing some of those compromises, offering a strong feature set, great color reproduction and a decent design. It might not get it right at every turn but if you can look past some of its flaws, this is still a solid choice in this price bracket.

The design is basic but clean, with thin bezels to the top and sides and a slightly thicker bezel along the bottom, which is home to the Hisense logo and IR sensor. The back is relatively plain but, thankfully, you won’t spend much time looking at that after you’ve plugged it all in.

One of the most interesting aspects of the TV design is the integrated stand. It’s a two-footed design, but the H8F comes with two locations where you can install them. That means you can opt for a wider footprint and position the feet towards each edge if you have the space, or move them further in, giving you the option of installing the TV on a smaller surface.

The sturdy feet offer plenty of stability no matter which design you choose, so there are no concerns about it toppling over if you choose the narrower position.

For a midrange TV, the features on offer here are pretty impressive. There’s full-array local dimming, with 60 zones in our 65-inch review unit, HDR support in the shape of HDR10 and  Dolby Vision, and Android TV is in place as its smart offering.

In the past, Hisense has more regularly used Roku or its own proprietary smart TV platform – all things considered we’d prefer Roku, but Android TV is relatively easy to navigate and presents a big improvement over alternatives Hisense has used previously.

If nothing else, the introduction of Android TV opens up the H8F to a huge app ecosystem, thanks to the Google Play Store, and the functionality is enhanced even further with built-in Chromecast capability, for easily sharing content from your phone to your TV.

Plus, the H8F also has Google Assistant built in, which allows you to use the mic-enabled remote control for all the same things you might use a Google Home speaker for. Not only is it handy for TV-related tasks, such as switching channel or accessing content, you can also use it to search the web for information and control your smart home gadgets.

If you’re introducing this TV into more of an Amazon household, you can still pair the TV with any Amazon Alexa-enabled smart speaker, and while Amazon Prime Video isn't currently offered on Android TV at the time of writing, now Google and Amazon have buried the hatchet, it is expected to arrive soon.

As far as connections go, the H8F is outfitted with a single collection of ports, on the left-hand edge of the TV. They’re all side-facing too, making them easy to get to whether you decide to put this TV on a stand or wall mount it.

They include four HDMI ports, one with audio return channel (ARC) support, as well as two USB ports, a composite video input and an optical port for soundbars. An RF connector means you can hook up an HDTV antenna to the TV's built-in tuner, and there’s also a headphone jack is for hooking up earphones or speakers.

To get the TV online, the H8F has both a wired LAN port and dual-band 802.11ac wi-fi. It also offers Bluetooth 5.0 for connecting headphones and other devices wirelessly.

The Hisense remote control is well designed for getting your way around the TV with ease. As well as the traditional number buttons, it features a four-way D-pad, and several functional buttons for navigating Android TV.

There are also four dedicated app buttons, for launching Netflix, YouTube, Google Play and Vudu directly, plus a Google Assistant button, which kicks the microphone into action when it is pressed and held.

Watching the opening scenes of Blade Runner 2049, the 4K detail of the H8F comes through with impressive clarity. Fine details such as strands of hair and specs of dirt on gloves are as crisp and sharp as we’ve seen on much pricier models.

However, all that crisp detail on offer only highlights the set’s missteps in motion handling. Fast action produces some smearing, and quick-moving objects and people are quickly surrounded by a bit of a haze. This is particularly easy to see in fight scenes.

Color reproduction is on point though, and whether watching a scene with a lush green forest or a holographic Vegas stage show, colors are bright, clean and lifelike.

The H8F isn’t scared of adding some punch and vibrancy when it needs to, but also knows how to play it subtle, with skin tones coming across very well, with close-ups on faces and hands looking extremely natural.

There is one noticeably significant issue with the H8F's picture, and that’s the backlighting. While some HDR content works well, with deep, rich black levels, clear  detail and bright spots that pop, other scenes can fall victim to significant haloing.

This is particularly noticeable as the backlight shifts to match objects moving on screen, which can cause whole sections of the display to switch from dark to light, either blowing out details, or losing them to muddiness.

And that’s not all. We also notice other classic backlighting issues, including shadows in the corners of the screen, and vertical bands of inconsistent brightness when viewing solid blocks of color, such as shots of the sky.

It's a shame, because when the elements come together, the H8F's excellent color quality is really highlighted with great brightness and contrast.

Listening to Radiohead's Exit Music (for a Film), Thom Yorke’s vocals are clear throughout, as are the instruments, from the lightly strummed acoustic guitar to the moderately thumping bass. There’s not quite enough punch in the drums for the most critical ear, but it’s not a bad performance at this level.

For TV content, you’ll find the H8F produces fairly decent audio quality if you can get the volume level just right. Anything below 25% loses out on bass, and anything from 50% and up, you’ll start to hear some minor distortion.

Once you hit 70% volume, you'll clearly hear the limits of the low-end sound, which makes it quite unpleasant. As such, a soundbar is always going to be our recommendation at this kind of level.

As is so often the case with midrange TVs at this level, the Hisense 65H8F is a tale of two halves.

Alongside crisp, 4K picture quality and great color accuracy comes distractingly inconsistent backlighting and motion issues that let the side down.

A 65in TV under $700 is rarely going to come without a few downfalls, and the H8F is certainly proof of that. But if you can live with them to get a 65in TV in your budget, then this is not a bad option to go for.