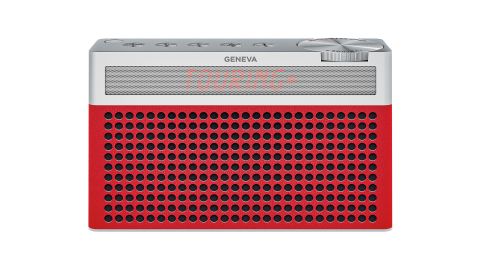 The main thing you need to know when choosing a new speaker is whether it sounds good or not. The Geneva Touring S+, a combined DAB radio and Bluetooth speaker, certainly does, but its appeal also lies elsewhere.

The Touring S+ is a lovely object that could have been lifted right out of a design museum. At the same time, it is nowhere near as easy to operate as a small Pure or Roberts DAB radio. Not that that completely ruins the Geneva Touring S+’s likability.

First impressions of the Touring S+ are of a solid block of aluminium. More than half of the surface is covered in a plastic, faux-leather material, but it’s the hard, cool aluminium on the top that sticks in the mind.

The retro style looks ‘cooler’ than the Roberts Revival, but whereas some other retro radios and speakers use distinct styling as a thin veneer to hide the cheap plastic underneath, the Geneva Touring S+ is extremely solid, with only the small grille areas over the drivers flexing under thumb pressure. Its buttons and volume knob feel great too. That big dial turns the radio on with a satisfying clunk.

The Geneva Touring S+ is practical in a few respects too. It has a telescopic aerial that sits flush with the top plate when not needed, and this brick of a radio is fairly portable. It will nestle into an airplane cabin bag, and only take up as much space as a few pairs of socks, too.

There’s no handle, but at just 4.5cm thick, the Touring S+ is easy to carry around. You should treat it nicely, though. As tough as it seems, the aluminium up top is fairly easy to scratch, and the metal grille in front of the screen dents readily.

There’s no weatherproofing here either, and with exposed 3.5mm jack and microUSB charge sockets sitting on the back, the Touring S+ isn’t partial to a spot of rain or being left on the beach either.

An excellent battery life of up to 20 hours means you can take the Touring S+ away for a weekend break and not have to give it a top-up. And it’s just as handy to cart around the house, for listening to music while you’re in the bath or bedroom.

The Geneva Touring S+ is mostly a joy to live with, but there are a few issues with the radio. It has DAB and FM tuners – simply long-press the DAB/FM button up top to search for stations. The problems appear after this search; when you flick through stations, the display shows the category before the station name. With only a few characters fitting on the display at once, you have to wait for them to scroll before you can see what station you’re listening to.

We also find that some stations don’t appear after the initial scan. The initial assumption is that the Geneva Touring S+ doesn’t have great reception, however, it actually appears to be an issue of station memory.

After each scan, the radio reports finding 99 stations – there are significantly more than that available in London, but the Geneva Touring S+ stops there. If it had left out some niche stations, or those with the weakest signal, we may not have noticed. However, in leaving out both BBC Radio 4 and BBC 6 Music, two obvious favourites, it highlights a problem.

We get around the issue by moving the aerial a little, so that weaker stations aren’t picked up. But the fact that Geneva hasn’t provisioned for a potentially large number of radio stations is strange, particularly in a high-price radio otherwise made with care and attention.

Bluetooth works well enough, aside from slower-than-average pairing, so you can always stream radio from your phone if you struggle.

Audio is the main improvement over the original Geneva Touring. The older model had two front drivers, and produced a pleasant but slightly light, low-power sound.

Geneva has added an oval-shape passive radiator on the back, and it radically increases the bass output. Sound is much more powerful than that of a traditional DAB radio, and is on a par with a modern wireless speaker of a similar size. Where its predecessor made music sound a little too thin, the Geneva Touring S+ has a solid bass output for something so small.

Kick drums and bass lines have the right kind of weight for a speaker of this size, and the tone is pleasant too. There’s enough mid-range coherence to let the Geneva Touring S+ masquerade as a miniature hi-fi.

Separation between bass and low-mids is good too, for a speaker determined to maximise the power of its output. Geneva has worked on the collaboration of the front active drivers and the rear radiator, not just added the rear bass enhancer.

Dynamics are solid rather than sensational. But like the best small radios, music doesn’t sound as if it is uncomfortably crammed into the small dimensions of its active drivers.

The Geneva Touring S+ is one of the most desirable miniature DAB radios around. And a passive radiator makes this new version far more balanced and satisfying than the original small radio Geneva released several years ago.

Parts of the DAB interface are deeply flawed, though. The station selection interface does not suit the display style, and the limited library is a shortsighted choice that can make the Geneva Touring S+ seem broken. Until you work your way around it, at least.

Read all our Geneva reviews