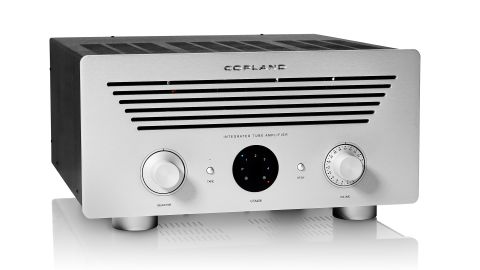 Copland has never been the most prolific of manufacturers. This small Danish specialist typically releases a new product once every few years, so the arrival of the new CTA408 integrated amp is something of an event.

It joins a tiny range made up of a cheaper integrated amp, a pre/power combination and a DAC – all of which make use of valve circuitry in some way.

The CTA408 is a chunky unit, standing taller than our reference Gamut D3i/D200i pre/power combination when stacked. It’s hardly a compact solution, so there’s not much in the way of actual space saving with this integrated, even if it does away with multiple boxes and a mess of interconnects.

It’s a heavy amp too, weighing in at a substantial 25kg thanks to those in-house designed output transformers. This amp generates a fair bit of heat thanks to its valve-based design, so as well as a sturdy support it needs a fair bit of ventilation to avoid over-heating.

Overall build is as good as we’ve come to expect from Copland. The CTA408’s casework feels solid and is nicely finished. Those distinctive control dials are pleasing to use and have a crisp action. There’s also a nice remote, which has large buttons and is pleasant to hold.

The amplifier’s quality of construction is easy to appreciate once you take the lid off. This is something you’ll have to do in order to fit the quartet of KT150 valves on initial installation. These valves are transported in their boxes to avoid damage during transit.

Don’t worry if you’re not mechanically minded. Simply undo the 16 Allen bolts (a tool is provided), remove the lid carefully and simply push the valves in place – they can only fit in one way. The valve positions are marked on their packaging and the circuit board, so it’s hard to go wrong.

The CTA408’s power amp section is built around a quartet of KT150 output valves used in an under-stressed circuit with a claimed power output of 75W per channel. The valves operate at around half of their full capacity, something that extends life. Copland suggests that they should last at least 4000 hours before needing replacement, which is a good length of time for a product such as this. A carefully stepped power-up procedure, which delays sound output for around 30 seconds on start-up while the valves stabilise, also helps in this respect.

While that claimed power output may seem relatively modest considering the price, this amplifier still has enough grunt to drive most speakers to a good volume in small to medium rooms. If you have a particularly inefficient pair of speakers, or a massive room, and like to listen at high levels you should look elsewhere. This amplifier isn’t really intended for you.

The CTA408 is well equipped for a product of this type. Its J-FET-based phono stage can accommodate both moving coil and moving magnet cartridges and is heavily shielded to reduce interference. Noise and hiss levels are respectably low, which is quite some achievement considering it shares the case with some high voltage and potentially noisy circuitry.

You can swap between the two types of cartridges using a small switch on the back panel and adjust the MC input loading between 50, 100 and 470 ohms options. While not as extensive a choice as some dedicated phono stages, that range of adjustment should cope well enough with likely cartridge partners.

There are four analogue line level inputs – enough for most systems the Copland is likely to find a home in – and even a tape loop for those that still record. All these connections are single-ended, which isn’t an issue for us, though may be for those who have invested in source components with balanced outputs.

Surprisingly for a valve-based product, the CTA408 has a headphone output. It’s a 6.3mm jack and is positioned on the side. As is conventional, plugging the headphones in cuts the sound to the speakers. The headphone output is driven by a dedicated Class A amplifier circuit rather than just taking the signal feed off the speaker terminals, as is sometimes the case. This bodes well for performance as the headphone amp circuit is better optimised for the job.

As is usual with valve design such as this, there’s a choice of speaker outputs. These are marked as either 4 or 8 ohms, and the best one to connect depends on your speakers. To start with, just use the one that’s closest to the nominal impedance of your speakers, which typically would be 8 ohms. There’s no harm in experimenting, just use the terminals that sound best to you.

An amplifier of this level positively demands high quality partnering equipment, and the Copland’s transparency and talent asks for plenty from the rest of the system. Our sources – a Technics SL-1000R record player and Naim NDX 2/555PS music streamer – work as well as expected, but we have to play around with speakers a little more than normal to get things singing.

Our usual ATC SCM 50s work pretty well, though their relatively low sensitivity of 85dB/W/m means volume levels are a little limited. The Copland struggles to satisfy with large dynamic swings when used with these speakers. We try Q Acoustics Concept 300s, but these don’t gel so well either, sounding a little thick and lacking in expression.

Perhaps the biggest surprise is just how well the Copland gets along with JBL L100 Classics. These retro-themed speakers may not seem an obvious partner but their combination of high sensitivity (90dB/W/m), vivid dynamics and sheer enthusiasm works brilliantly with the CTA408’s sophisticated style of sonic delivery. We stay with these for much of the test.

The sound of Copland’s products tend to buck the valve norm. They trade the stereotypical warm and softness of many such designs for a neutral, even-handed balance that’s far more typical of a good transistor circuit. Detail levels are impressive, though the CTA408 is never one to emphasise leading edges in a bid to make the music sound more exciting than it is. Instead you get a well-organised, insightful presentation that puts the musical message first.

Play Neneh Cherry’s Broken Politics set and this amplifier responds with a wonderfully light touch. Cherry’s vocals come through with passion and nuance, and the kind of natural dynamic fluidity only really good valve designs seem to manage. There’s a lovely sense of space around each instrumental strand and a total lack of unwanted hardness to the sound. This makes the Copland an amplifier we can happily listen to for hours on end without issue, and with a wide quality of recordings. It won’t make a meal of sub-standard productions even though there’s enough clarity here to show up any flaws.

Yet, unlike many of the valve-based alternatives, the CTA408 can deliver the album’s sparse electronic backdrop with punch, solidity and a surprising amount of grip at low frequencies – basslines are agile and articulate without losing their tonal richness. Even rhythmic drive, an area where many valve rivals suffer, is good enough to please.

Sure, the likes of PMC’s Cor or Leema’s Tucana II Anniversary (both transistor designs) have more in the way of outright authority at the lowest frequencies, particularly with more demanding speakers, but for a valve design the Copland does well.

We move to Holst’s Jupiter and the Copland responds with good scale, wide-ranging dynamics and the ability to render instrumental textures in a convincing manner. It’s a composed performer that rarely sounds ruffled, even when the music gets demanding. We’re convinced by the tonality and the amplifier’s ability to capture the energy and majesty of the piece.

With recordings such as this, we find stereo imaging to be good rather than great. While there’s a pleasing left to right spread of sound and a solid location of instruments, we never quite manage to get the depth we know is in the recording.

We’re pleased to report that the built-in phono stage is a good one. While there’s the expected slight loss of transparency compared to the line inputs, the CTA408 keeps most of the insight, dynamic finesse and organisation intact. We listen to a range of records from the likes of Beethoven Fifth Symphony to Bob Marley’s Exodus and the Copland takes it all in stride. It’s engaging, insightful and dramatic as and when the music demands, and we can ask no more than that.

The headphone output is another success. While the sound from this output lacks just a little of the finesse and transparency we hear through our reference speakers, the shortfalls aren’t big and we get some rather fine sounds through headphones as varied as Focal’s Stellias and Grado’s RS1.

The sheer size of the CTA408 means it’s hardly a compact solution and it’s up against some rather fine transistor-based designs. But this Copland has plenty going for it. It’s a neat, well-built one-box solution that has a blend of sonic talents to rival the best at the price. Take some care with system matching and it’s sure to please.