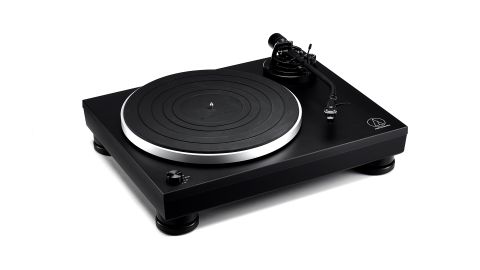 Audio-Technica has refined an already excellent deck, but the AT-LP5x is up against some tough competition

Audio-Technica’s original AT-LP5 turntable was a winner. Launched in 2016, its combination of solid engineering, useful features and fine sound were enough to make it one of our go-to recommendations for anyone wanting a sensibly priced, fuss-free record player.

So it’s no surprise to find that Audio-Technica hasn’t changed its winning formula for this new LP5x model. Why would it?

At first, it’s hard to notice any obvious changes between the models, but look carefully and you’ll find the addition of a 78rpm speed option alongside the usual 33.3 and 45rpm. There’s also a new cartridge, the AT-VM95E.

This moving magnet builds on the foundations laid by the long-running AT95 design fitted to the original deck. The new cartridge features a more rigid and lower resonance housing alongside improved mechanicals that not only result in a higher output but also an extended and better controlled high frequency response.

This cartridge will prove easier to fit than its predecessor thanks to the use of captive nuts in the housing. This is an issue if you buy the VM95E separately from the deck, as it comes pre-fitted in the package. If you want to play 78s, you will need to change the stylus to something designed for the job, such as Audio-Technica’s AT-VM95SP.

The built-in phono stage can now cope with both moving magnet and moving coil cartridges. There’s a small switch on the back to swap between the two types. This feature certainly opens the deck up for use with more ambitious cartridge designs, though considering the LP5x’s price point and ability, we’re not convinced partnering it with even a budget moving coil will bring significant benefits. Still, it’s good to have the option.

The final change to the record player is the removal of the power supply from the chassis to the mains plug. This moves a source of electrical and mechanical noise away from the sensitive deck structure, and so should have some sonic benefits.

Everything else remains pretty much as before, but that’s not a bad thing. The LP5x feels substantial for the price, though its plastic plinth sounds a little hollow when tapped. The deck’s quartz-locked DC servo direct drive motor is quiet and spins the aluminium platter up to speed quickly.

We like the crisp feel of the speed selector and the smoothness of the arm bearings. The arm’s detachable headshell makes swapping cartridges a breeze should you wish to upgrade. The company makes six different stylus options that fit the cartridge housing, so it’s easy to improve the sound over time.

This Audio-Technica is an easy deck to set-up. Once out of the packaging, all you have to do is carefully put the platter in place, attach the headshell (the cartridge is already fixed in place) and set the tracking weight to the recommended 2.0g. Don’t forget to set the bias to the same value. We are up and running in around five minutes.

Once everything settles, we start serious listening and it doesn’t take long to realise that the LP5x’s sonics mirror those of its predecessor closely. We think it sounds a touch cleaner and clearer than before, but not enough for it to be worth anyone with the older deck upgrading to this. But the overall sound is still good enough for it to be considered a class leader.

We play Mary J Blige’s No Drama and the Audio-Technica turns in a cohesive and musical performance. It’s a surefooted and robust presentation that remains unflustered even as the song becomes more demanding. Detail levels are high and all that information is rendered with organisation and composure. This deck never sounds as though it is struggling, no matter how complex the music gets.

That point is reinforced when we play Beethoven’s Fifth Symphony. Here the LP5x does a fine job rendering the scale and power of the piece. Dynamics are delivered with fluidity and force while there’s enough in the way of resolution to track subtle instrumental strands even when there’s a lot going on. The stereo imaging is layered and precise, making it easy to locate specific instruments within the sound stage. This deck has little to fear from rivals when it comes to solidity and composure.

Switch to Sony’s PS-HX500 and the presentation loses some authority and substance. There isn’t quite the same sense of control either. However, the Sony counters with greater sonic agility and even more detail through the midrange. They’re both fine performers and the choice between them comes down to taste as much as anything else. The story is the same when recording from their USB outputs, though Sony’s in-house software allows recordings to be made in DSD. Either way, as expected, the resultant digital files mirror the sonic character of each of the decks.

For fun, we bypass the LP5x’s internal phono stage with our reference Cyrus Phono Signature and take a listen. Despite the price difference (the Cyrus costs £1495) the comparison shows that the Audio-Technica’s phono stage is a good one. We don’t think it will be a limiting factor when the time comes to upgrade.

Audio-Technica is right not to mess too much with a winning formula. The AT-LP5x is a well-executed design that sounds great for the money. It’s also well built, easy to set up and nice to use. These things make it worthy of a spot on anyone’s shortlist.