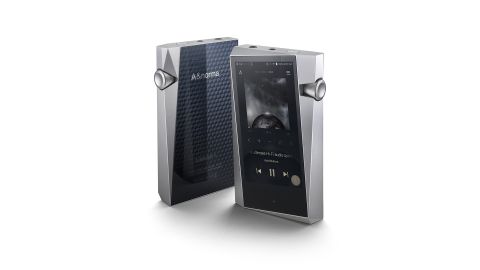 By squeezing even more performance out of its entry-level player, Astell & Kern has almost guaranteed that the SR25 is a winner

Occasionally, we have a fair idea of what a product is like before it has even entered our test rooms – not because of any particular clairvoyant ability on our part, but due to it being preceded by a line of successful predecessors.

The Astell & Kern A&norma SR25 is the latest in what has been a long line of excellent, What Hi-Fi? Award-winning, ‘entry-level’ portable music players. Each new generation invariably proving more talented than the last. The SR25 doesn’t let us down, propelling its lineage forward from the 2018-introduced A&norma SR15 to set a new performance benchmark.

It pushes the price along too, with £649 ($699) now the minimum you can pay for a current A&K player. There’s now a clear gap for a truly budget player in the line-up, which makes one wonder why the company hasn’t gone after the Apple iPod Touch or budget Sony Walkmans in the music player world. For now, at least, A&K is focused on delivering top-end specification and sound quality for middle-market money, which it does brilliantly.

The A&norma SR25 marks more of an evolution than a revolution of the brand’s entry-level player, but the strides it takes are nevertheless significant.

Whereas the A&norma SR15 downsamples 32-bit files for 24-bit playback and converts DSD128 files to PCM 24-bit/176kHz, the SR25 supports native DSD256 and 32-bit/384kHz audio. This is more or less where file support in digital hardware tops out, and is beyond what most people will actually need.

For those with an impressive hi-res music library, the new Performance Mode has been designed to get the most out of it. By automatically optimising the player’s memory allocation according to the data size of the song being played, this mode, according to Astell & Kern, prevents sonic losses in the data transmission process during the playback of higher-quality files.

The newly-designed circuitry inside the SR25, still based around the pair of Cirrus Logic CS43198 Master Hi-Fi level DAC chips found in its predecessor, is also aimed at improving sound quality.

In a first for an Astell & Kern player, the SR25 expands Bluetooth support to include Sony's LDAC codec alongside aptX HD and A2DP for high-quality wireless playback through a pair of compatible headphones, such as the Sony WH-1000XM3s.

The 3.6in HD screen is now more responsive thanks to a faster Quad-core CPU and the and upgrade to version 9.0 of the Android operating system. Music streaming service apps can be added via the Open APP platform, and we notice small interface improvements to ease navigation.

For example, the playback screen’s ‘A’ logo, which takes the user back to the home menu, is now ever-present for one-touch access: no longer is an initial touch of the screen required to make it appear. On the playback screen, the album art no longer needs to be touched in order to bring up the back, playlist, repeat and shuffle functions either; they now simply sit below it. When scrolling libraries, eight (as opposed to six) songs/artists fit on one screen, too.

Thankfully, battery life hasn’t taken a hit – at 21 hours, the SR25 lasts longer than any other A&K player and twice as long as the SR15 and previous-gen AK70 MKII. Astell & Kern has ditched the micro USB charging socket to make way for the increasingly popular USB-C interface, too.

The SR25 is aesthetically similar to the SR15, with its geometrically distinct form, hallmark side volume wheel, top-panel 3.5mm and balanced 2.5mm headphone jacks, and microSD slot (a means to expand the internal 64GB storage).

Its aluminium chassis, now in an attractive ‘Moon Silver’ finish, has filled out a bit and gained 24g in weight. However, it could still be described as slimline, and is manageable to hold and use with one hand.

The SR25’s sound is familiar, rich, smooth and a stickler for detail, and picks up where the SR15 left off. The bar has undoubtedly been raised a peg or two, though, especially in terms of subtlety.

Compared to its predecessor, the new A&K player more faithfully delivers The Tallest Man on Earth’s I Love You, It’s A Fever Dream, capturing more intricacies in the intimate production – the echoic atmosphere, the creak of his seat – as well as paying greater dynamic attention to his exuberant strumming and the crispness of those leading notes. The soundstage has been prized wide open, too, allowing the track’s scale to soar and detail to unfold.

It’s even more dynamically fluid and varied in its rendition of Peter Broderick’s Eyes Closed And Travelling, communicating greater emphasis on the extra burden of piano keys at the end of each sequence.

The extra space and information it surfaces creates a more ominous feel to the opening of The Doors’ L.A Woman. Upon switching from the SR15 to the SR25, we are suddenly plunged into a sense of anticipation as the drums and cymbals build and the guitar melody quickens.

While still an excellent player, especially at its current discounted price, the SR15 is less agile, less precise and less rhythmically assured in comparison. Musically, the SR25 is considerably more compelling.

A successor should, of course, offer some degree of progress and the A&norma SR25 fulfills this over its predecessor. It’s marginal in terms of design and features, but not so modest when it comes to sound quality.

Notably more expressive and eloquent than any other portable music player we’ve encountered at this price, and far beyond anything that smartphones are capable of, the SR25 demonstrates just how good music on the move can sound, while also remaining reasonably affordable. Which begs the question: how much can Astell & Kern continue to squeeze out of its entry-level portable music player?