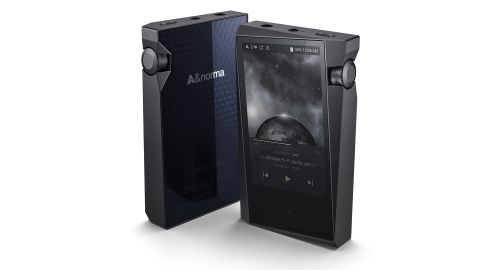 A geometrically ambitious design and twelve-syllable name may sound overly obtuse for a midrange portable music player, but a combination of the two has certainly drawn our attention to the Astell & Kern A&norma SR15.

But considering A&K’s track record – shaped by several five-star reviews and Awards over the years – any new player from the US company, however daft its name or lopsided its shape, is always going to pique our interest.

The A&norma SR15’s rather odd name has been adopted from its sibling, the A&ultima SP1000 player (£3000) launched last year, rather than the eponymous 19th century Italian opera or Marilyn Monroe’s real name.

If those specs sound remarkably familiar, it’s probably because they’re almost exactly the same as those on A&K’s AK70 MKII (£600) – the predecessor to the A&norma and a 2017 What Hi-Fi? Award winner.

The A&norma shares many of its features, but improvements have been made here to evolve A&K’s ‘standard’ music player line. As well as implementing two more advanced DACs (the Cirrus Logic MasterHIFI class DAC CS43198) in a dual-DAC design for optimum performance from both left and right channels, the A&norma sports an improved interface and support for native DSD playback (to DSD64) in addition to PCM files up to 24-bit/192kHz.

Owners of even higher-resolution files are also catered for. A 32-bit file with a 384kHz or 352kHz sampling rate is simply downsampled to 24-bit/192 kHz or 24-bit/176 kHz respectively for playback, while DSD128 is also playable through conversion to PCM 24-bit/176kHz.

The A&norma also has an alter-ego as a preamp/DAC, meaning it can be used solely as a digital source when its USB type-B output (also a charging port) is connected to an external DAC or amplifier with a USB input.

The player’s USB type-B connection doesn’t work as an input, as it does on the AK70 MKII, so unlike its predecessor the A&norma can’t work as a DAC between your headphones and laptop, which we think is a shame.

However, the A&norma also features the more sophisticated user interface of the A&ultima, which means it inches closer to a slick smartphone experience. The pull-down menu for quick access to wi-fi, Bluetooth, EQ and volume swaps a screen-hogging interface for a scrollable single-tier bar, while the home screen, which can be viewed by scrolling right, also has a more contemporary feel.

It displays more options, too. As well as albums, artists, genres, playlist and folders there is also favourite, settings and direct access to DSD and MQS (Master Quality Sound: 24-bit/192kHz) files.

On the playback screen, album art gets a little more space without sacrificing the display of file information, such as file type and size, the name of the song, artist and album.

After holding Sony’s massive new digital music player at IFA 2018, it’s nice to have a properly portable, 154g-heavy player in our hands – and indeed in our pockets. The A&norma more or the less matches the AK70 MKII for size, with its slightly thinner frame evened out by a few extra millimetres of height.

A&K has ditched the sloped right-hand side panel seen on the AK70 MKII, in which the volume wheel sits, and chiselled a far more artistic angular design. The 3.3in screen is slightly off-kilter against the rectangular aluminium body, although the effect is subtle so thumb gymnastics aren’t called for.

It’s as close to geometric abstraction as we’ve seen in a portable music player, and the design may prove to be rather divisive. On a practical note, though, it makes for more tapered – and therefore hand-friendly – edges.

Fortunately, the A&norma has as much sonic aspiration as design ambition, with a performance which could give the AK70 MKII, let alone smartphones, an inferiority complex.

While the SR15 has that distinctive A&K sound – shrewdly detailed and dynamic – the comparison between the two players is the audio equivalent of switching from DVD to Blu-ray, with the A&norma being much clearer, crisper and more transparent.

We play St. Vincent’s Los Angeles, and the opening synth beat is hurled forward with greater impetus. Its rhythmic prowess choreographs the synth elements working around it, while the accompanying vocal is not only clearer through it all but also has more sassiness.

We can’t help but stay tuned for Happy Birthday, Johnny as it peels back another layer of subtlety to confidently communicate the tenderness of her declaration.

Its wider canvas is evident during the initial stereo interplay of Radiohead’s Bones (24-bit/48kHz). As the track’s dense chorus kicks in, the guitar lines and percussion sound more determined, and that unrelenting reverb rings even truer.

We switch to Manu Delago’s Parasol Peak album (16-bit/44.1kHz, Tidal), a sparse production recorded by a seven-man ensemble on a mountaineering expedition in the Alps, and the A&norma’s affinity for subtlety is exposed.

Everything is full and lush, from the bellowing brass and pattering percussion to Delago’s handpan handiwork. The A&norma picks out the sonic intricacies of the natural sounds of running streams, and keeps them at the forefront of the composition while the rest of the track builds around them.

Battery life is good too, we get around nine hours playing at reasonably high volumes, switching between wired headphones and Bluetooth connectivity to B&W’s PX cans and the Naim Mu-so Qb wireless speaker.

Making strides with performance, usability and file support, the A&norma keeps A&K’s standard line progressing in the right direction. It offers more refinement, rather than a full-scale revolution, over its predecessor, which is reaching the end of its natural shelf life.

With the product’s strange geometry in mind, it seems fitting to note that the What Hi-Fi? Awards are just around the corner. They probably can’t come soon enough for the A&K A&norma SR15.