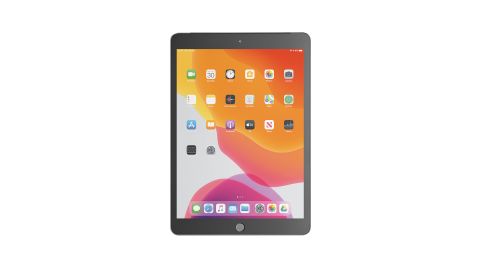 Sacrifices have been made in the name of affordability, but the iPad remains an excellent tablet

You might have presumed that the iPad Mini would be the most affordable tablet in Apple’s range, however, that honour actually goes to the standard iPad, now in its 7th generation.

It looks like a lot of tablet for its £349 ($329) price tag, particularly given that the screen is half an inch bigger than that of its predecessor, but it is missing some tech featured in the Mini. So, the question is whether the standard iPad is still a great device for movies and music.

The bigger screen makes the 7th generation iPad a little taller and wider than its predecessor, but thickness is unchanged at 7.5mm. The weight has increased by only around 15g.

The straight edges and thin bezels of the current iPad Pro models are missing here, with the standard iPad looking similar design-wise to the rest of the non-Pro iPads. It has curved edges and enough bezel top and bottom (when held in portrait) to house a front-facing camera and ‘Home’ button. It’s hardly a new or surprising look, but there is a timeless classiness to the iPad design.

The three colour options are Silver, Gold or Space Grey, and we’re particularly taken with the last of these, which gives the tablet a more mature look. It is a magnet for fingerprints, though, particularly on the front, so keep a microfibre cloth handy.

Along the top edge is the power button and 3.5mm headphone socket (remember those?), and on the bottom there’s a Lightning connector and two rows of holes for the stereo speakers. Along the left edge is the Smart Connector, which allows the 7th Generation iPad to be switched to landscape and connected to Apple’s Smart Keyboard.

This could be a big deal for anyone looking for a tablet that can be more efficiently used for emailing and/or word processing as well as watching movies and listening to music. Neither its predecessor, nor the current iPad Mini, boast Smart Keyboard-compatibility, though all three can be used with the 1st generation Apple Pencil.

The big news here is that the 7th generation iPad’s IPS screen has increased in size to 10.2in. That’s 0.5in bigger than that of its predecessor, but resolution has been increased to maintain the pixel density of 264 ppi. This is the same pixel density as every iPad in the current range except for the Mini, whose 7.9in display has a pixel density of 326ppi.

The standard iPad also lacks some of the screen tech of the iPad Mini and iPad Air, including the laminate layer, anti-reflective coating, True Tone (which automatically adjusts colours and brightness to match ambient lighting) and wide colour support. Perhaps most pertinent for those looking to use their tablet as a portable movie machine, those display downgrades mean that this iPad is the only one in the current range that doesn’t support HDR.

It’s also the only model that doesn’t have one of Apple’s newer processors. Instead, the A10 Fusion chip of the outgoing model has been carried over. Predictably, battery life also remains the same, at about 10 hours of general use.

All current iPads now run iOS 13, which will be familiar to anyone who’s used an iOS device in the last few years. This most recent version is focused on improving performance and efficiency, but it also boasts a smattering of new features, including a new Dark Mode, which gives the interface a moody makeover, and an overhauled Photos app. It’s hardly a huge departure from previous versions, but remains a snappy and intuitive platform that’s jam-packed with apps.

Apple’s own TV app is the best in the business for pay-as-you-go movie streaming (and downloading), so we head here to watch our test favourite It. We’re immediately impressed by the iPad’s performance – it has the supremely natural colour balance for which Apple devices are renowned.

The slight saturation of the summer holiday scenes is present, without everything becoming too rich and warm, and skin tones have just the right amount of blush to them.

There’s excellent detail and definition, too, and motion is handled exceptionally well, with not too much blur or judder, and none of the shimmer, fuzz or artificiality that’s typical of TV motion processing.

But, while the standard iPad puts in a lovely, authentic performance, the iPad Mini sprinkles a little more fairy dust on proceedings. It can handle the HDR element of the video, for starters, and that helps it produce brighter, punchier highlights and deeper, more dramatic blacks.

The bigger iPad is a bit flatter in terms of contrast, and in dark scenes things can become a little bit murky, particularly in a well-lit room. Thanks to its smaller screen and higher pixel density, the iPad Mini is also even sharper than its bigger, more affordable brother.

Switching to our non-HDR download of Solo, the differences in the brightest parts of the picture are far less pronounced, with both tablets producing similar highlights. The Mini remains the more crisply defined and boasts marginally better contrast.

We watch a range of content from Netflix, Sky Go and Amazon, and the results are the same: the 7th generation iPad puts in a consistent and natural performance, but the iPad Mini steps things up a notch, particularly when HDR is involved. Of course, that extra picture performance comes at a higher price and a smaller size, and that must be taken into consideration as well.

It’s a little disappointing that the iPad 7th generation’s stereo speakers are still integrated into the tablet’s shorter edge, as it means that when you’re watching a video in landscape mode, sound is emitted from just one side. It’s also easy to block one of the speakers with your hand.

That said, the audio performance is strong. There’s weight, solidity and dynamic variation here that other tablets, including the current iPad Mini, can’t match. Of course, the speakers are still limited by being built into a thin, portable device, so we’d advise using a wireless speaker for sound if you want to listen out loud.

Better still, take advantage of that headphone socket and plug in a decent pair of headphones. Do so and you’ll discover a performance with a natural, near-neutral tonal balance, effortless musicality and good dynamics. The iPad Mini is a little bit crisper and rhythmically organised, but it’s a fairly small margin.

The standard iPad is the most affordable model in Apple’s current tablet range, and sacrifices have had to be made to deliver a large screen at a low price. That means it doesn’t have quite the same video and audio sparkle of its siblings.

But Apple’s least impressive tablet is still an impressive tablet. The 7th generation iPad is a joy to use, and delivers movies and music with consistent naturalism. Make no mistake, this is an excellent portable media machine.