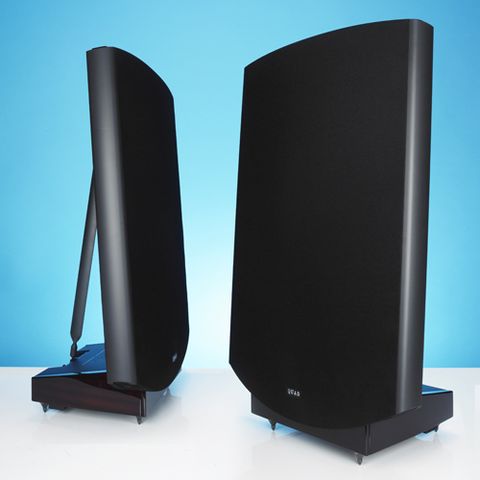 Despite the protestations of many marketing departments, there are few hi-fi products that genuinely qualify for “legendary” status. Quad’s electrostatics are one of those rare exceptions, and here we have the latest incarnation, the Quad ESL-2812s.

The originals were launched back in 1957, and through five generations these electrostatics have set the standards in a number of sonic areas that, even today, most conventional rivals struggle to match.

The electrostatic operating principle still seems clever and innovative, even after all these years. Essentially, it consists of an electrically charged Mylar membrane placed between two metal grids.

As music plays the electrical charge on the grids changes polarity and through the forces of attraction and repulsion makes the membrane move, so creating sound. Mylar is a great choice of material because it is very light and responds to signal changes quickly. Distortion levels are very low, too.

Generational changes in Quad’s electrostatics have usually followed an evolutionary path, and so it remains with this latest version.

In the Quad ESL-2812, the internal power supply – needed to deliver the charge for the thing to work – has once again been upgraded. Its layout is revised and the quality of components improved: it now includes audiophile favourites such as Vishay metal film resistors and Murata capacitors, for example.

An electrostatic speaker doesn’t have a cabinet as such. It has a supporting frame for the diaphragm and this structure has been further strengthened and damped for this new model.

Further work has been done to make the grille more acoustically transparent and better supported, too. Unlike with ordinary speakers this can’t be easily removed – and that’s a good thing too considering there are thousands of volts of charge floating around inside.

Despite the raft of detail changes, though, these speakers remain what they’ve always been. Other than being quite obtrusively wide, looking for all the world like shrunken room partitions, they still require mains power to work despite being passive speakers (the power is needed for the stators), and they still need a great deal of care in room positioning and system matching.

The ESL-2812s, like the generations before them, throw out as much sound backwards as they do forwards, and very little to the sides. Ideally, then, they should be used well away from rear walls, but can be placed relatively close to a side wall without issue.

Quad’s ESLs have rightly built up a reputation for imaging brilliantly, but once again, this only happens when time is taken to get their position in the room and angle towards the listening seat spot-on. (If you have a large room or simply want greater bass reach and scale, though, Quad make a larger version of this speaker called the 2912, which costs around £8000.)

In our listening room we found considerable benefit in placing sound absorbing material – heavy curtains or similar works well – over any reflective surfaces behind the speakers, as this reduces the amount of sound that bounces back to interfere with the Quad’s forward output. It’s worth making an effort because the sound becomes markedly clearer and better focussed.

Similarly, these Quads are really transparent to system electronics. We got a good sound with our reference Bryston BP26/4B SST2 reference amplifier but things got even better when we used Audio Research’s LS27/Reference 75 valve-powered combination. We also, predictably, got good results with Quad’s own II-Eighty valve monoblocs, too.

It’s worth taking the trouble to get everything spot-on, because once you do you’ll find the 2812s exceptional in a number of respects.

Compared with conventional alternatives these electrostatics sound immensely clean and a touch dry, which takes a little getting used to. We’re so used to hearing speakers that have multiple drive units linked by a crossover and housed in a wooden box that the first listen to the Quads – which has none of these things – is a little disorientating.

Surprisingly for a Quad, though, the ESLs don’t sound wholly neutral. There’s a touch of excess richness around the bass and a slight lack of brilliance to the treble. Put it together, though and you have a smooth presentation, without perhaps the openness of Focal's Diablo Utopias. That said, it’s a sonic signature that’s easy to get used to.

They sound terrifically cohesive, for a start – and that isn’t a quality to be underestimated. There’s sense of complete unity to the sound from the lowest bass notes upwards which, once heard, makes most conventional speakers sound just a little broken.

Electrostatics tend to excel in the midrange and these are no different. Listen to the 24-bit/96kHz version of Kate Bush’s 50 words for Snow and the ESL-2812s deliver her vocals with plenty of subtlety and focus. There’s a mass of detail but the sound never feels overtly analytical, just unforced and natural. It’s a solid, well-planted sound that extends well beyond the speakers themselves.

Listen to Beethoven’s Midnight Sonata and the ESLs again excel. They sound dynamic – more so than we remember from the last generation – and immensely insightful, too.

There’s a strong sense of the recording acoustic on this disc, and the Quads do a convincing job of reproducing it with a wonderful composure to the sound and an unexaggerated way of detailing the leading edges of notes.

Move to the likes of The Dead Weather’s 60 Feet Tall and the ESL-2812s prove adept at delivering crisp rhythms and the complex interplay of instruments. While not the purest of recordings (and pretty compressed with it) there’s plenty here to challenge a pair of speakers, but these take it all in their stride. They have a measured yet precise approach to rhythm replay and enough bass weight to satisfy most people.

Spend a little time with the ESL-2812s and the shortcomings in conventional speakers soon become apparent. Even the best engineered samples sound a little uneven and disjointed, particularly in the midrange.

But despite their obvious strengths Quad’s electrostatics have never been for everyone.

Putting price to one side, some will find them hard to accommodate and others will still want something that sounds more overtly impressive – many conventional floorstanding alternatives will do that, at least over a short listen.

However, if you value cohesion, insight and unexaggerated smoothness we can’t think of an alternative that does these things better.