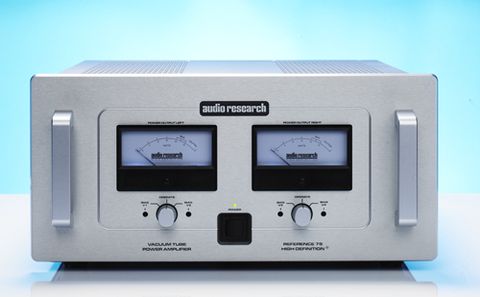 The Audio Research Reference 75 is the baby power amplifier of the company's top range and is intended for those who want top-quality sound but don’t need any extra power. (Those that do need the oomph can have the likes of the range-topping Reference 750 monoblocs, which output a spicy 750W and sell for an equally spicy rather hefty £27,500 each.)

Those prices shouldn’t come as a surprise for those that know the company: Audio Research is one of the most revered brands in high-end amplification. Along with the likes of Krell and Mark Levinson it helped establish the prestige market, and to this day remains a go-to brand for top quality valve amplifiers.

As is usual for Audio Research products, build quality is best described as solid and functional rather than luxurious; the Reference 75 is designed as a tool to do a specific job rather than doubling as an objet d’art. It feels like it will last for years, though, so we won’t complain too much.

Maybe it’s the inner nerd in us, but we can’t help but like the twin VU meters on the front panel. They have two uses.

Firstly, they show instantaneous power output, and it’s surprising just how low this can be: we rarely saw these meters register much above 5W per channel even at high volume levels. We suspect this is because they can’t react to transients (where the amplifier delivers lots of power for a very short periods) quickly enough.

Valves, like transistors, usually need a certain amount of current – bias current – flowing through them to work. (This is what makes electronics warm even when they’re not actively in use.)

As valves are used, their electrical characteristics change gradually, and these changes mean that their bias current requirement changes, too. It therefore needs to be adjusted to gain maximum performance.

In a conventional valve amplifier this needs to be checked regularly – every few months if it gets heavy use. This is usually done by getting inside the amp and being handy with a multimeter but, understandably, many people aren’t comfortable with doing this. So either they don’t do it, in which case the amplifier’s performance suffers, or they have to get the dealer to do the job.

Audio Research has come up with a neat solution: twist the appropriate control knob and that front panel meter shows the bias current. There are useful markings showing where the current should be set, and the pair of small holes drilled either side of the knob give access to the adjustment screws. The company even provides a dedicated screwdriver to make the job easy. Not just a pretty fascia, then.

Round the back of the Reference 75, though, things are more conventional: you’ll find a single pair of balanced XLR inputs and a set of traditional screw-down speaker terminals, which are ideal for spade or bare wire connections.

At the heart of this amp beat a quartet of KT120 valves. They’re of a type that the company has only recently started using, and should work well for around 2000 hours. Unlike with transistor units, keeping valve amps continuously powered for ultimate performance isn’t a good or cheap (as far as electricity consumption is concerned) idea.

Even a look at the power supply shows the care Audio Research takes over its designs. As expected, the company uses high quality smoothing capacitors, a hefty transformer and careful circuit board layout to get the optimal performance.

Spending almost £8500 on a 75W-per-channel unit doesn’t seem like great value, but use the amp as intended with conventional speaker loads and rooms that don’t qualify as palatial, and it positively sparkles.

We tried a range of partnering equipment, including alternate preamps such as Burmester’s lovely 808 and a range of speakers, from KEF’s LS50 to our reference ATC SCM 50s, without issue.

Certain valve-amplifier stereotypes ring true here. The Reference 75 is wonderfully fluid in the midrange, sounding totally free of hardness and as refined as they come. The treble in particular is a stunning mix of insight, power and smoothness; the way dynamics are delivered is incredibly graceful and subtle. But that’s not all.

Listen to The Dark Knight Rises soundtrack and the Audio Research uncovers a mass of fine detail. It sounds truly three dimensional, painting sounds with care and stability that little else we’ve heard can match.

In our opinion, most power amplifiers at double this price would have difficulty bettering the Reference 75’s transparency.

Accepting the relatively limited amount of power available, this power amp’s composure when pushed hard is pleasing, as is its refusal to sound harsh or aggressive, even when provoked by poor recordings. There’s no denying that it will reveal all the flaws – but likewise, it never overstates them.

The Reference 75’s broad spread of talents means that it sounds comfortable with pretty much all types of music, too. True, this is no muscle-bound powerhouse, so if you want to pump out the likes of Kanye West’s Power at party levels and feel the bass wobble your insides, there are alternatives that do it better.

But, even on music like this, the Audio Research’s spellbinding resolution and dynamic finesse work wonders.

The Audio Research Reference 75 really does deserve to be considered a landmark product of its type. Consider us wowed, and very tempted.