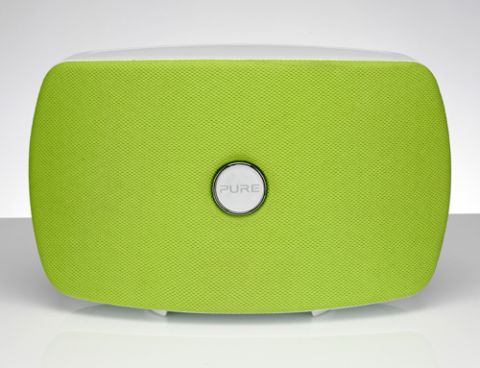 The Jongo system isn’t quite there yet, but this is still a very affordable entry point to wireless and multiroom music

Pure sure is going full-pelt with its new Jongo music system. It was only a couple of months ago that we looked at the very first Jongo, the S3, and already the series has blossomed into a five-unit family of music streamers that can be used solo or grouped together into a complete multi-room system.

This, the Jongo T2, is the entry speaker in the group.

Three of the units are essentially different-sized versions of the same mains-powered all-in-one. At the top you’ve got the £300 T6, then there’s the £200 T4, and at the bottom the £130 T2. It’s the T2 we’ve decided to focus on here because on paper it’s such a compelling proposition – essentially a Sonos Play:3 for precisely half the price. Or £40 less than the new Sonos Play:1. Exciting.

Let’s start off by assuming you’re in the market for just a single all-in-one wireless speaker. You get your T2, plug it in, press the wi-fi button on the back and it creates its own wireless network.

Connect to that via phone, tablet or PC and you can give the Jongo a name (we plumped for “Beetlejuice”, if you’re interested), set it to horizontal or vertical placement (wall brackets and stands are available separately), and give it your network details.

Then, as if by magic, your new green (or yellow, or orange, or black, or white – all depends on which of the interchangeable grilles you choose) speaker is ready to rock.

Pure’s intention is that you use its Connect app as the hub of your listening. From here you can access internet radio and podcasts, send music that’s stored on your phone and – if you’re prepared to pay £5 per month for a subscription – stream the millions of tracks from Pure’s own Spotify-rivalling service.

The unit won’t play Apple Lossless tracks, which is a disappointment, and not everyone wants to switch to a new music streaming service, but the addition of Bluetooth means all of the formats supported by your phone can still be played, as can any streaming service you have an app for, be that Spotify, Bloom.fm, Napster or anything else.

It makes the Jongo T2 an attractively flexible and feature-heavy alternative to the average wireless speaker – and in sound terms it’s pretty solid. There’s a good spread of sound and it goes loud enough to fill most rooms with its punchy, projected performance.

Compared with the best Bluetooth speakers at the price it’s a little thin at the top, and there’s not a great deal of detail or dynamic agility, but this is a more than adequate performance for the money. Those who listen to talk radio more than music will have even less to complain about.

Using two T2s (or T4s or T6s) you can quickly create a stereo pair. Just go to the pairing menu in the Pure Connect app, press a button to the left of the Jongo’s name to make the light on the unit flash for identification, designate it as left or right accordingly, then just tap on the partner unit and the pair is created.

Sound wise this makes for a much bigger, wider and focused delivery, although we still have issues with a lack of weight, detail and dynamics.

What makes the T2 so much more than the average wireless speaker is that it can be the starting point of a whole-house system. That brings its own problems, though.

Because you can send music to just one speaker at a time using Bluetooth, multiroom system owners will find themselves more tied to the Pure Connect service, and that’s not without issues.

On top of the aforementioned lack of Apple Lossless support, Pure Connect doesn’t allow you to create playlists that includes music that is both stored locally and in the cloud. It also lacks support for streaming from computers or NAS devices on your network.

It’s also worth mentioning that in all our testing we encountered a couple of seconds of delay between tracks, and if the link to the Jongo was broken (app closure, out of range of the wi-fi router, etc) the next track wouldn’t start at all.

Presumably this means that after each track the Jongo has to wait while the app tells it what to play next – something that isn’t an issue with Sonos.

Having said all that, there are plenty of positives here. Latency between units is essentially non-existent, so all of the units in the house synchronise perfectly.

The Pure Connect catalogue rivals Spotify for size and yet costs £5 a month less (unless you want to add offline play to the app, which takes it to £10). And, of course, it’s loads, loads cheaper than Sonos. And that last point becomes only more pronounced the more rooms you want to fill with sound, of course.

The T2 is a very promising unit and system. Most of our niggles with it are software related, and we hope most, if not all, of those will be addressed in the coming months – and that’s a prospect we’re very excited about.