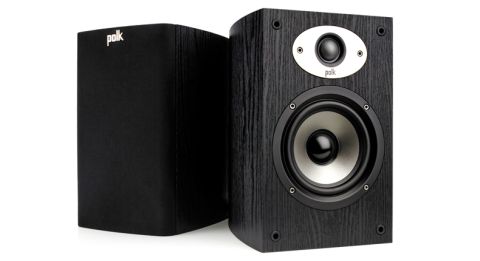 They’re not perfect, but - for the price - these Polks are a pleasant surprise

But sometimes, affordable and good value can be the same thing – as is the case with these TSx110B speakers from American hi-fi brand Polk Audio.

A bookshelf design is used here and – while not as compact as a price rival such as the Roth Oli RA1 – they’re perfectly wall-mountable, with a simple bracket incorporated into the rear design and a couple of built-in spacers to ensure they hang neatly. Just remember though that wall-mounting does have an impact on audio quality, with the bass becoming a bit too overpowering for our liking.

In other aspects the Polks are sort of what you expect – not particularly handsome, but not ugly either. There's much to be said for the traditional hi-fi look.

But much more important is how they sound – and they sound good. Kick off with alt-J’s Every Other Freckle and there’s real weight to the sound, and the bigger dynamic shifts are handled well. The bass goes deeper here than on many other speakers around this price, but more importantly and impressively, it doesn’t overpower or drown out the overall sound.

Instead, there’s a really nice balance through the frequencies, with no element causing any offence. Only the treble occasionally stands out a little - not because it’s harsh or hard, but because it doesn’t quite link up with the mid-range as seamlessly as it might. The only other issue we’ve got with the TSx110Bs is revealed through comparison with some very strong competition in the form of the Q Acoustics 2010is.

The Q Acoustics are just £17 more expensive than these Polks if you do a bit of shopping around – and these Award-winners present a broader soundstage, in which every audio strand is given space to breathe. The TSx110Bs, however, produce a narrower spread of sound that’s a little more muddled; you have to work a bit harder to focus on individual elements, and vocals aren’t quite as clearly projected.

There’s no one reason for this: it’s a combination of slight deficiencies in timing, detail and dynamics, that mean true precision and subtlety is just out of reach.

But let’s not forget the price of the Polks. The £100 mark will be the maximum speaker budget for some – and the fact that these speakers provide a sound with impressive weight, scale and balance is quite the achievement at this price.

They’re extremely easy to drive, too, so that micro-system crying out for a speaker upgrade should have no problem with them.

Sure, if you can stretch the budget a touch you’ll find the Q Acoustics 2010is a classier option in just about every way. But if £100 really is your absolute limit, you will do well with these TSx110Bs.