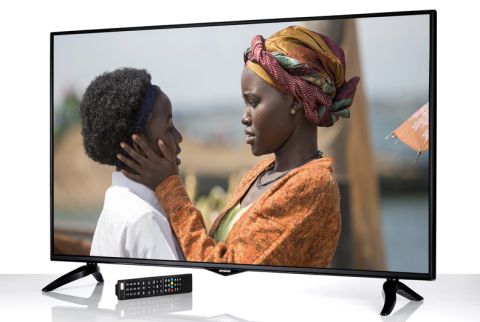 A decent display with a good amount of detail, which is let down by a difficult user interface and absence of features

It’s been a year since we last tested a Polaroid television. The previous model to pass through our testing rooms was the P55D600, a TV that offered 4K images on a low-cost set, much like this Polaroid Series 6.

At £500, this Asda exclusive TV is some £200 cheaper than its predecessor was back then, and it has entered the market at a seriously competitive level.

With so many manufacturers looking to be the go-to brand for low-cost 4K TV, Polaroid has no easy task making its mark.

This Polaroid television has a familiar design, one that is almost identical to the Finlux 48UXE304B-P. There are also 43in and 65in options in the range.

There are four HDMI inputs and three USB ports with one of each on the back of the television. On the online side, the Polaroid has a ‘Smart TV’ brand OS that looks very similar to the Finlux Smart operating system, with a few cosmetic tweaks.

However, only Market and YouTube actually have dedicated apps that are ready to use; Twitter requires you to create an account from a SmartTV portal before use, while the Facebook app is just a shortcut to the television’s in-built browser.

The remote is a nice size and the rubbery navigational buttons are easy to use. There’s also a large Netflix button alongside the power button at the top of the remote, for quick access.

Navigating the menus isn’t easy, as they change depending on the source. The brightness and contrast settings shown for a Panasonic DMP-UB900 Blu-ray player are different to the ones you get if you plug in a Samsung UBD-K8500, which in turn are different from the Polaroid’s default menu. It’s a peculiar trait, and one that we haven’t come across before.

Also, while the list of features includes iPlayer functionality, there aren’t the usual Freeview TV catch-up services found on other smart TVs.

In terms of 4K content, your options are limited to hard-wired sources, Netflix or YouTube videos; Amazon Prime, BBC iPlayer, ITV, Channel Four and Channel 5 on-demand services are all missing.

When using the services that it does have, however, the Polaroid conveys a solid image.

White causes an explosion in Tuco’s headquarters and, as the dust settles, this television handles the explosion and the flecks of ash with satisfying clarity.

When White gets into his car, the camera close-up on his face, the Series 6 reveals a translucent glisten of sweat on his brow that reflects the adrenaline, and tension, in the scene.

The fight between Kylo Ren and Rey at the end of Star Wars: The Force Awakens on Blu-ray has good colour balance to it, the red and blue lightsabers in clear contrast against the white, snowy backdrop of the Starkiller Base’s surface.

The bright colours look realistic and there isn’t an obvious issue with sharpness – where the outline of people and objects in the foreground is emphasised against the background, due to the television’s processing - that is often found on budget TVs. It’s an easy watch, without much to jar you out of your immersion.

One of the notable omissions on this television is High Dynamic Range (HDR), which increases the colour range the TV can show. Its absence here means that, despite the 4K support, the Polaroid isn’t quite future-proof.

The Series 6 is a comfortable listen too. There’s a satisfying amount of body, and large-scale sound effects are rich and punchy.

There’s also a surprising amount of transparency to the midrange; when Kylo Ren offers to train Rey, there is a palpable anger in his tone.

Where other televisions make Ren sound slightly insincere, the Series 6 leans into his fury and desperation.

For £500, Polaroid’s Series 6 is a good television. The picture has a decent amount of detail, the colour range is balanced, and it sounds clearer than many other TVs in this price bracket.

However, the odd menu system, lack of catch-up services, and the absence of HDR means that this television stops short of getting top marks.

See all our Polaroid reviews