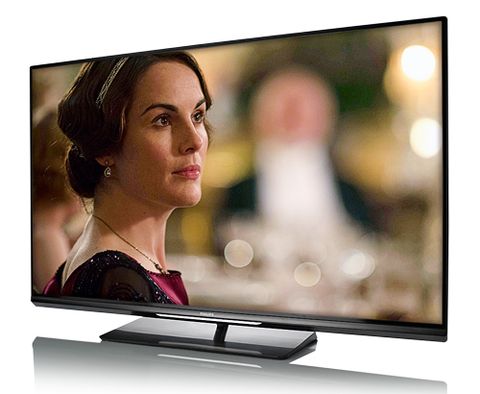 Philips has never played the game quite like the other major TV manufacturers. This Philips 55PFL6007T is one of the first of its 2012 sets we've seen, for instance… and it's late November at the time of writing. Better late than never, though, eh?

You can't deny that the 55PFL6007T is a good-looking telly. From its super-thin bezel to its vanishingly thin 3cm depth and attractive stand, it's a class act from a design point of view, and even gives the company's higher-end sets a run for their money.

As you might expect from a £1500, 55in TV, the spec is pretty fully loaded. Let's run over the highlights.

It's (passive) 3D, for a start, with four pairs of glasses included in the box. There are also smart features on offer, including BBC iPlayer and Skype (which includes video calls if you fork out for the optional camera), and wireless is built-in. You're also pretty spoiled when it comes to connectivity: there are four HDMI inputs as well as component, RGB Scart and PC sockets; three USB ports; and optical audio and headphone outputs.

And then there's Ambilight, too – a set of LEDs in the left and right edges of the TV, which project light on the wall that echoes the colours of the images being shown on-screen. Its goal is to bring you further into the picture and help to reduce eye-strain. More on that later.

The set-up wizard is simple enough to follow, and guides you through all the steps you need to go through to get up and running – including configuring your network, and offering a picture set-up tool for those of you who don't want to muck about with THX Optimizer discs. It gave decent results, but we still prefer to start off the THX way and then tweak the picture from there.

The 6007's on-screen interface is typical Philips – and we mean that in both good and not-so-good ways. It's great to have options; you could spent half an hour trawling through the labyrinthine menu structure and still not manage to explore it all.

But that's the double-edged sword: for instance, while there's a brightness control in the picture settings area, this controls the backlight. The one you're probably looking for (along with the contrast slider) is buried in the 'Advanced' menu. Weird.

However, once you've done the set-up you'll rarely need to go in there again. Be aware, though, that settings are specific to each source, so you'll need to set them up individually. This makes it a little trickier, as an optimiser disc will work fine for doing the HDMI inputs – but obviously won't work with broadcast TV.

One small gripe we have is with the interface's speed. It's slick-looking, sure, and the animations are a lovely touch – but it's all on the sluggish side; the sheen is taken off proceedings a bit when the menus start to stutter across the screen.

The programme guide is a good-looking affair, complete with logos for (most) channels. It includes a search feature for whittling down to what you want to watch, but a page up/down button on the remote would have been nice – there are a lot of channels on offer.

To start off we went in with all pistons popping, and a spin of TT3D: Closer To The Edge on Blu-ray. Any film featuring footage of motorbikes screaming through country lanes at 200mph – in 3D, no less – is going to provide a challenge for the kit charged with displaying it. The Philips takes all that high-octane action in its stride.

It's an absorbing experience, especially in the super-slow-motion shots. Colours, while inevitably dimmed somewhat thanks to the glasses, are still vibrant – and the picture as a whole is punchy and full of detail. There's some shimmer at times, but the depth on offer is great.

Our only gripe, in fact, is that the TV automatically boosts the brightness and contrast to 100 per cent when you switch to 3D. This is to counteract the tint of the glasses, but it does undo some of the work you put in when calibrating the set in the first place.

You can tweak the dial the settings back from their maximum, but it would be nice to have the option to keep them as you wanted in the first place.

Switching to the 2D version of the film, we can get a better handle on what the 6007 can really do. And it can do a lot. The picture, for one thing, is pin-sharp – there are bags of detail here, from the sponsor logos on the bikes to the foliage as it rushes by. Colours, likewise, are convincing, vivid and exhibit subtle changes between tones.

Contrast is great, too, with white areas kept on a tight leash to prevent them becoming overblown, and blacks going creditably deep. Our only gripe here is with the detail present in dark areas – there's still room for improvement, and the dark areas can be a tad washed-out on occasion. But it's only a small moan – the bigger picture here is truly grin-inducing.

Native motion is smooth, and if you want it you can deploy Philips' Pixel Precise HD and HD Natural Motion processing tech to make it silkier still. For the record, we preferred the picture with all processing switched off.

There also appeared to be a small software glitch that turned the HD Natural Motion back on when we switched sources – but hopefully that will be ironed out in a firmware update.

Flipping to the daytime delights of Freeview HD, we alighted on perennial favourite Come Dine With Me. Again, there's plenty of detail, punch and vibrancy to the picture – and the fine detail in some of the questionable dishes being served was clear. We almost wish it wasn't!

There are, however, some issues with edge definition: objects can look a little hard and 'processed' at times, showing a small halo around them, and motion isn't the best we've ever seen. There's some instability during quicker camera pans, but it's still on the right side of forgiveable.

Where things start to unravel a bit is when it comes to standard-definition broadcasts. Of course, anything in standard-def (especially some of the ropier Freeview channels) isn't going to look amazing on a 55in television, but even so there's quite a bit of noise and digital artefacts here. You can smooth some of this out by tinkering with the settings, however.

We've always liked the Ambilight system. On Philips' more expensive TVs you get three LED bars – top, left and right – but this one has just the latter two. We can't say we mind.

The effect can be dialled in in terms of intensity and the speed with which it reacts to changes in the picture, or you can choose between static colours which are projected back on to the wall at all times.

The set asks you to choose your wall colour from a bank of colour swatches, so it can fine-tune the effect to your room, and you can even set it to display a static colour on the wall when the TV is switched off – two nice touches. In use it works really well, seeming at times to take the bezel out of the picture altogether, and definitely making it easier on the eyes in a darkened room.

And let's not forget that this TV is also smart. Not as clever as some, mind you – Samsung and Sony offer mind-boggling arrays of online content via their portals – but it still covers the essentials.

The internet browser (which can be navigated with the remote, or via an optional keyboard and mouse) is fine, although we're not sure how many people would use it when so many houses are littered with smartphones, tablets and computers (plus Flash content is no-go).

But it's the on-demand services that are key – and to that end you get Blinkbox, Euronews, AceTrax and BBC iPlayer; Napster, Absolute Radio and Aupeo! for music; and YouTube for watching videos of lovely kittens, among others.

The YouTube app is decent, with a clever search tool that helps you out by suggesting likely letter combinations to make it easier on your remote-control thumb. The Philips also does a decent job of displaying the content. A view of short climbing film The Insiders in HD looks good, if not the best we've seen, while standard-def stuff is still more than passable given the screen size.

But it's with BBC iPlayer streaming that the 6007 really shines. The quality in SD is decent (if not the smoothest), but switch to HD and it's orders of magnitude better, and actually looked better than broadcast standard-def. Of course, your mileage may vary depending on your connection speed, but still…

Elsewhere there's a 2D-to-3D conversion mode which isn't the worst we've seen (although it does tend to mix up the foreground and background a bit sometimes). There's also a game mode that allows two players to see different full-screen views given the appropriate (optional) glasses, and a comprehensive e-manual should you find yourself lost in all the menus.

The TV even sounds decent for a flatscreen – there's a surprising amount of bass weight on offer (although you shouldn't expect even your smallest ornaments to budge on the mantlepiece), and dialogue and effects are clear.

Not bad, then. Not bad at all. Philips has done pretty much everything right with this TV. Yes, there could be more texture in deep black areas, but that's true of pretty much every single LCD set out there. And yes, the menus could be a little more intuitive – but you probably won't be delving around in them very much.

The highlights far, far outweigh the negatives here: there's great contrast on offer, bags of detail, smooth motion, convincing and vibrant colour, a cool extra in Ambilight and, above all, a truly enjoyable performance. We can't wait to see what Philips has in store for 2013… just don't leave so late, eh?