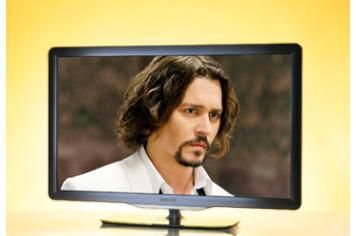 Although it’s a truly excellent television in some areas, the Philips 37PFL7605 isn’t a complete all-rounder

While the 37PFL7605 doesn't fall into Philips' usual ‘wacky' category, just a quick glance will tell you that it does fall into the ‘premium' one.

This handsome set is made from premium materials and has a profile of just 42mm, despite the inclusion of Ambilight (which emits light from the left and right sides of the panel and increases the sense of perceived depth in the picture).

The 7605 also boasts LED backlighting and 100Hz processing, and comes with one of those likeable oval remote controls.

No hi-def TV tuner
But disappointingly, there are gaps in the spec. The absence of Freeview HD on Philips' 2010 range has been well documented, and the company has reduced prices to make up for it, but it's still a glaring omission at this price.

Also, while the Net TV portal has some decent apps, including YouTube, eBay and TomTom HD Traffic, it still lacks BBC iPlayer and an on-demand movie service.

The 7605 is unique in its ability to access the web, but it's not adequate compensation – especially as a lot of embedded video content doesn't work.

Philips TVs tend to be fiddly to calibrate, but the 7605 is a touch easier than most, thanks to a ‘Cool' tint preset that's actually very good – which means that unlike Philips' other models it isn't necessary to spend forever messing around with settings.

It can't quite combine that superb punch and excellent depth simultaneously, but the contrast you get here is still satisfying.

In terms of detail and definition, the Philips is grand, and at most times produces the crispest, most insightful, and most thrilling pictures of the test.

Not at all times, though: even with HD Natural Motion turned on, horizontal pans smear and blur rather badly, despite the fact that vertical movement stays sharp.

Still, regardless of how much movement there is, colours are brilliantly balanced, with a combination of vibrancy and neutrality that can only be matched by the very best in class.

A sharp picture, full of depth
Switch to standard-definition from a DVD or the Freeview tuner, and while it's not an entirely artefact-free performance, the Philips is once again supremely sharp and detailed, adding a real sense of three-dimensionality to proceedings.

We frequently heap praise on the sonic ability of Philips TVs, and once again those rear-firing woofers help produce an audio performance that's weighty and full-bodied for a flatscreen, putting its rivals to shame.