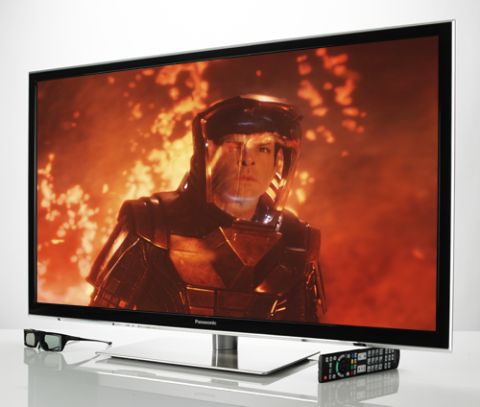 Product of the Year, Awards 2013: The Panasonic TX-P42GT60B TV shows that reports of plasma’s demise have been greatly exaggerated

Currently Panasonic isn’t inclined to deviate from its corporate stance of unblinking vagueness where the future of plasma TV is concerned but for now, at least, the technology has the company’s full backing.

And if this 42in Panasonic TX-P42GT60 plasma TV (part of the 2013 iteration of the respected, successful and durable GT range) is anything to go by, there’s plenty of life left in the plasma approach yet.

Not that the TX-P42GT60 plasma TV initially makes much of a song-and-dance about its capabilities. While the other major players in the flatscreen market seem intent on pushing the boundaries of design as far as the mainstream will allow, the kindest thing to be said about this Panasonic is that it’s determinedly understated.

We don’t doubt Panasonic knows its market, but the TX-P42GT60’s design isn’t going to leap off the showroom wall and grab the casual browser by the lapels.

We’re on much more certain ground where specification is concerned, though. This 42in TV has three USB sockets, which allow both recording and multimedia-file playback, integrated wi-fi (there’s also an ethernet input) and an SD card slot.

TV reception is provided by Freeview HD and Freesat tuners. Three HDMI sockets is one fewer than every competitor offers, mind you (it’s one less than last year’s Panasonic TX-P42GT50, in fact), which is worth bearing in mind when you tot up how much equipment you'll need to attach to your new TV.

Happily, it’s safe to say that Panasonic has jumped from being a smart TV also-ran just a year or two ago to now offering one of the most useable and satisfying online experiences around.

The My Home Screen interface lets each individual user organise and customise bespoke home screens – content from any source (TV tuner, AV input, content on any networked device, online video services and apps) can be prioritised in a logical and straightforward manner.

The interface itself is crisply legible and easy to navigate via the (immediately familiar) remote control or the (sensible, unflashy) Viera Remote 2 control app for iOS and Android. Viera Remote 2 also doubles as a second screen, and can use your iOS/Android device’s mic for voice control if you’re the patient type.

Equally useable, though considerably less satisfying, is the inexplicable Touch Pen. Big (by the standards of a pen) and attractively designed, the Touch Pen pairs wirelessly with the TX-P42GT60 and lets you scribble directly on to your TV’s screen. Can you imagine encouraging anyone to start doodling on the TV you just paid a comfortable four figures for? Even if only electronically? No, us neither.

The set-up process strikes a nicely judged balance between in-depth tweakery and plug’n’play simplicity – the Panasonic 'GT60 is both THX and ISF certified and, as befits a product carrying those organisations’ logos, is adjustable in plenty of ways.

Intelligent Frame Creation is designed to smooth and naturalise motion; Resolution Remaster wants to help sharpness and clarity; Colour Remaster allows the punch and lividity of colours greater expression. And this, of course, is in addition to the usual contrast, brightness, colour temperature, noise reduction and-what-have-you adjustability.

But while the inveterate fiddler will be kept happy for hours getting this plasma TV picture precisely to their taste, anyone who can find a few minutes to run through a THX Optimizer set-up (there’s one on any number of your DVDs or Blu-rays, we guarantee it) will be rewarded with a picture that’s considerably better than the one the TX-P42GT60 serves up when fresh out of its packaging.

Even when given the most humdrum standard-definition fare to deal with (and let’s face it, it doesn’t get much more humdrum than a broadcast of Homes Under the Hammer), the Panasonic does sterling work.

Its upscaling abilities are excellent: images are bright, high-contrast and colourful. There’s an understandable softness to edges, admittedly, and a constant shortage of fine detail, but the GT60 grips motion tenaciously, delivers fine skin-tones and -textures, and demonstrates good apparent depth of field.

If your favourite TV programmes are only available as SD transmissions, the Panasonic GT60 plasma will make the best of them.

The same upscaling prowess is evident when the Panasonic TX-P42GT60B is given a DVD of Skyfall to deal with. The GT60 brings decent definition to edges, even during hectic motion, and its already impressive work with colours and contrasts steps on to the next level.

And it’s when upscaling a disc that one of the long-acknowledged strengths inherent in plasma TV technology first becomes apparent: the Panasonic GT60’s ability to deliver truly deep black tones and to offer decent detail therein. The numerous dark scenes in Skyfall are described with confidence, the Panasonic demonstrating the sort of insight into a coalhole picture that is simply beyond any comparable LCD rival.

Add secure motion-handling and a deft, natural touch to skintones and there’s no need at all to worry about your disc-player’s upscaling performance – the TX-P42GT60B has it covered.

Of course, it’s with native 1920 x 1080 HD content that a TV like this comes into its own, and when fed a Blu-ray signal of Tarantino’s fulminating Django Unchained the Panasonic GT60 is simply an eminently watchable television.

The wide-ranging colour palette is beautifully judged, this Panasonic plasma able to serve up the nightmarishly overdriven red tones as readily as muted sepia interiors, and the Panasonic’s expertise with black tones (which are truly, inkily black here at times) is utterly persuasive. Detail levels are sky-high, motion is handled with an assurance approaching disdain and contrasts are as strong (or as subtle) as required.

The TX-P42GT60 is a 3D plasma of the active-shutter type, and we’re pleased to report a) Panasonic’s 2013 3D glasses are the lightest, most comfortable and most discreet the company’s ever turned out and b) the GT60 is a brilliantly accomplished 3D watch.

A 3D Blu-ray of ParaNorman is beautifully stable, decently bright and unarguably, deeply three-dimensional. Only in the most trying circumstances (a slow left/right pan with rapid left/right motion on it, along with some complicated patterns, for example) can the Panasonic be caught out – edges can get slightly furry as the TX-P42GT60’s processing betrays itself. The overwhelming majority of the time, though, this is about as watchable a 3D TV as we’ve seen.

Having examined every viewing circumstance, and with the GT60 plasma passing every test with aplomb, we switch to gaming – and here the Panasonic proves just as skilful as before. Input lag is negligible, and the screen’s ability with motion, contrast and black tones is every bit as helpful here as it is when watching TV. 3D gaming is far from the eye-strainingly tiring experience it can be on lesser screens.

Add to all these plus-points a wide viewing angle and the ability to remain easily watchable even in a very brightly lit room, and it’s evident that the Panasonic TX-P42GT60 is a picture-maker of indisputable quality.

The only area where it’s anything less than impressive, in fact, is sound. We’ve long-since learned not to get our hopes up where flatscreen sound is concerned, but the TX-P42GT60 really is a disappointment: hard and fizzy at the top end, rather vague and ill-focused in the midrange and altogether absent below there, this is a TV that doesn’t so much cry out for a soundbar but shrilly and querulously insist on one.

But despite having started (with design) and ended (with sound) with the Panasonic TX-P42GT60’s shortcomings, everything in between is never less than very good and occasionally truly outstanding.

2013 42-inch TVs are only now starting to trickle into the What Hi-Fi? Sound and Vision testing rooms, but we reckon any other 42in model is going to have to go some way to make this Panasonic plasma TV look second-best.