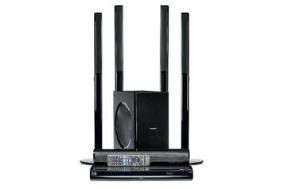 Lacks the polish of class-leading systems, but a good option nevertheless

In the box, you get a mic to use with Panasonic's automatic speaker calibration system. However the mic's cable is quite short; if you sit on the other side of the room, there's a good chance it won't reach.

Another niggle is that there's no test tone emitted from the subwoofer. Inevitably, this means you have to turn down the sub's level in the on-screen menus.

It is also successful at upscaling standard-def DVDs and does a fine job of producing a detailed image during I Love You Phillip Morris.

The speakers integrate well and the subwoofer produces decent bass weight – but it doesn't go particularly deep, nor does it sound especially tight. The centre channel handles dialogue clearly and concisely, but isn't as convincing as it might be. There's a general leanness to the sound not present with the Samsung set-up.

Rivals offer better spec
Specification is a mixed bag. There's an HDMI output, which is ARC compatible (Audio Return Channel), so when connected to a compatible TV, the system can receive audio via the TV's HDMI output.

But there aren't any HDMI inputs – you have to make do with two optical digital inputs for external kit. An ethernet socket allows you to hook up to the web, but you can't go wireless without the optional Wi-Fi dongle.

Rival systems offer wireless connectivity as standard. You do, however, get an integrated iPod dock.

The 'BT735 is a good all-in-one system, but it doesn't have the star qualities that we ask of class-leading systems.