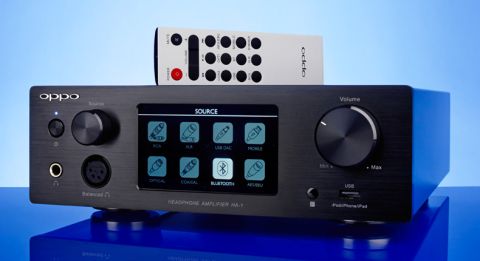 Worth auditioning at this price, but it needs to deliver more energy and excitement for the full five

Oppo is a name traditionally associated with high-end Blu-ray players like the BDP-95EU, but more recently it’s been making moves in new territories.

Last year saw us dishing out five stars to its first pair of headphones, the excellent PM1s, not to mention a commendable four stars to one of its first smartphones to hit UK shores, the Oppo N1.

This portfolio expansion continues with the HA-1, the company’s first DAC and headphone amp. Presented in a sturdy, well-built aluminium chassis in a choice of black or silver, it certainly knows how to make a good first impression, with a bright, 4.3in colour display and equally smart remote control to back it up (there’s also a control app if you prefer).

Everything about its design feels well considered, from the responsive volume and source knobs to the good-quality connections at the back; this is a product that has been built with its audiophile market in mind at every step.

The screen on the front offers a simple graphical interface when it comes to choosing your source and offers technical information on the audio signal, as well as a bit of creative flair with the choice of displaying a digital VU meter or a more modern spectrum display.

Inside the HA-1, you’ll find the same ESS 9018 Sabre 32 Reference DAC and output driving stage used in Oppo’s high-end Blu-ray players, alongside a Class A amplifier, meaning the HA-1 runs quite warm as a result.

When it comes to connections, the HA-1 is no slouch, offering users the choice of both RCA or XLR balanced analogue inputs and outputs, with its digital inputs including coaxial, optical, balanced AES/EBU, and an asynchronous USB DAC.

Add to this an Apple-compatible USB-A input on the front of the device and Bluetooth aptX functionality, plus the ability to double up as a stereo pre-amp, and there’s not much the HA-1 is missing on paper.

Users even have the option of using the 4-pin balanced XLR (as found on the Oppo PM-1 headphones, and a handful of other high-end cans) or standard quarter-inch headphone jack.

We’re not convinced balanced inputs are necessary at this price, from a performance point of view at least, but there will be systems that this option appeals to all the same.

Getting down to its performance, we plug in a pair of Beyerdynamic T1s and fire up our music library. The HA-1 is capable of playing back PCM files up to 24-bit/384kHz and both DSD64 and DSD128 (via USB-B) files, and a quick flick through our tracks doesn’t throw up any issues.

It’s a big, open and refined sound that’s decently detailed and offers a richer, weightier presentation than the Chord Hugo, one of its closest rivals. It also has a smoother character, making it a forgiving listen with lesser-quality tracks, but one that sacrifices a layer of detail and dynamics in the process, rounding off a level of drive and attack and making it sound altogether more restrained.

Play Run The Jewels’ Oh My Darling Don’t Cry and while the rumbling bass line has a real presence, the high-pace lyrics and impatient instrumental lack the same level of energy you’ll hear if you play the same track through the Hugo.

Switch the tempo to the foreboding Gotham’s Reckoning from Hans Zimmer’s The Dark Knight Rises soundtrack, and once again, the Oppo is capable of putting real oomph behind the lower bass notes and big drum crashes.

What you lose are the finer dynamics that build the sense of unease and really power the track towards its frantic finale. It ultimately comes down to timing, and the Oppo HA-1 is simply not as rhythmically adept as the aforementioned Hugo, and isn’t capable of injecting the same level of excitement and fluidity to a track.

To call it laid back would be going too far, but energy levels do fall short. Plugging the HA-1 into our main system, taking audio from our MacBook Pro, shows up similar characteristics.

The lively intro to Stevie Wonder’s Higher Ground could do with a little more bounce and dynamism, as well as more expression in vocals.

As you’d expect, Bluetooth provides a much weaker delivery than any other input, sounding smaller and considerably less detailed, but it’s a nice inclusion for convenience if nothing else.

We test the HA-1’s claimed pre-amplifier prowess and, as is often the case with products of this type, we found it to be no substitute for our reference pre-amp, sounding overall weaker, smaller and less dynamic.

Despite our scepticism over the inclusion of balanced outputs, we did find there was more life to playback when using these in this set up, but still not enough for us to recommend that the HA-1 be used primarily as a pre-amp – it might look like a nice added extra, but we’d still suggest you invest in a separate one if you want the HA-1 to be part of your system.

The Oppo HA-1 is a good, well-built and excellently specified DAC and headphone amp at this price but, at this level, the competition is strong.

There’s a lot to like about the HA-1 – it’ll no doubt appeal to many because of the pure level of choice it offers – but for the full five stars we want higher levels of drive, excitement and dynamics. In those departments the Oppo falls short by some margin.