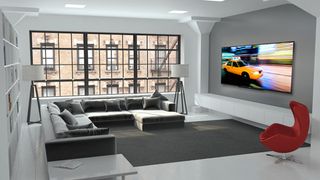 Coming with an aluminium finish and smart design, the TV weighs a whopping 64kg. It can however still be wall-mounted, though finding a wall big enough might be a challenge.

There's a built-in triple HD tuner and media player allowing for playing music and videos and displaying photos from USB sticks or your home network.

Alberico Lissoni, VP consumer Electronics for Sharp, says: "If you want the biggest and best TV, this is what you've been waiting for. It simply has to be seen to be believed and provides an experience so immersive, you get completely absorbed by whatever you are watching.

"We have created a premium design that is light and slim to fit into as many homes as possible. Remember, you can sit as close as 3.5 meters and see colours burst out of the screen, with incredible detail that's as large as life."

Is bigger better? Would you want a 90in TV without 4K? Or would you rather just get yourself a projector?