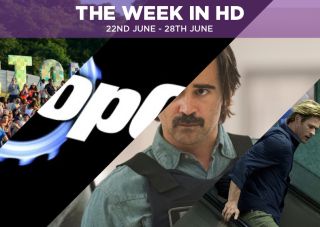 Michael Mann's Blackhat could have been a prescient, thoughtful take on cyber-security. But it isn't.

Blackhat features Chris Hemsworth's Nick Hathaway – the most handsome hacker since Angelina Jolie – recruited for a US/Chinese taskforce to find the cyber-terrorist who attacked both a Chinese nuclear reactor and the US stock market.

The gunfights are impressive, but the story is strangely subdued. Blackhat really ought to have been better.

Buy Blackhat on Blu-ray at Amazon

The first time we lay eyes on Stonehearst Asylum it’s wreathed in fog as thunder reverberates around the sky. And yet inside are happy, lively patients. So what are we to believe? That’s the crux of this twisty film from Brad Anderson.

Jim Sturgess’s Dr Newgate arrives at the asylum to finish his studies, but he experiences some unexpected events. Ben Kingsley’s Dr Lamb and David Thewlis’s Mickey Finn greet Newgate on arrival but something is off about both men. There’s light in the darkness in the form of Kate Beckinsale’s Eliza Graves, who sparks something in Newgate. Who is she to him and why does he want to rescue her?

Sturgess and Beckinsale are backed by a terrific supporting cast including Michael Caine and Sinéad Cusack. The less you know about this film the better…

The amnesiac crew stumble on in their mission, but their endgame is dividing opinions. Should they assist the people on the mining planet faced with terrible odds, or leave them to their death?

The Western Book of the Dead. True Detective is back and it's not content to repeat the first series. Detective doubles the number of main characters to four: Colin Farrell's Ray Velcoro, Rachel McAdams' Ani Bezzerides, Taylor Kitsch's Paul Woodrugh and Vince Vaughn's Frank Semyon in this anthoogy of stories in the town of Vinci, California.

Their stories are united when a city manager disappears, starting an investigation that draws in Farrell, McAdams and Kitsch's police officers with Vaughn's career criminal, who is looking to become legitimate.

Early reviews have pegged it as being not quite as good as the first series that starred Matthew McConaughey and Woody Harrelson. Find out for yourself with this episode.

Buy True Detective series one on Blu-ray at Amazon

Unto the Breach. The knives are out and war is declared at Empire Entertainment as Coookie reveals Anika's big secret. This forces Luscious and his sons to take drastic action.

Memento Mori. The Creature unleashes his rage upon Frankenstein, while Sir Malcolm is yet again prey to Evelyn's enchantments.

England secured a win against Sweden with a late winner despite a lethargic performance. If they have designs on reaching the final, they'll need to up their performance in the last group match.

Fixtures against Italy are never easy and this won't be any different.

Chapter 10. Miami is hit by a hurricane and that leaves Jane stranded in a hotel, while Rogelio and Xiomara race to the bedside of Alba after hearing that she's in a coma.

Secondo. While Bedelia and Hannibal continue to throw lavish dinner parties where the guests may or may not die, Will visits Castle Lecter in Lithuania, hoping to find clues about Hannibal's past, his family and the events that led him to become the serial killing cannibal that he is.

It's the second week of the heats, and a new group of celebrities (singer Mica Paris, TV presenter Sam Nixon, comedian Syd Little, actor Amanda Donohoe and Paralympian Danny Crates) take to the kitchen to cook up a storm.

They must impress Gregg and John, survive the invention test, and work as a team in two restaurants' busy lunchtime service.

Summer's over and the affair between Noah and Allison has fizzled out. Four months after it began, Noah finds himself back in Montauk, where a chance encounter between the two brings up some uncomfortable feelings.

Sara Pascoe, James Acaster, Ed Byrne and Gary Delaney join the regulars on the panel this week, with much mocking and hilarity.

Day 1. It's the first day of BBC Two's coverage of Glastonbury, with Florence and The Machine kicking off the music festival on the Pyramid Stage.

The band replaces the Foo Fighters as the headline act, since frontman Dave Grohl's out of action with a broken leg.

Stay tuned throughout the weekend for coverage and music, including Catfish and the Bottlemen, Motorhead, alt-J, Paul Weller, The Chemical Brothers, and more.

Argentina hasn't won the Copa America in 22 years and they've been feeling the pressure of expectation throughout this football tournament. Colombia – with misfiring striker Radamel Falcao up front – will look to take advantage of any slip ups from Lionel Messi and friends.

But that's not all: Pharrell Williams, Parliament and more acts across all the six stages get their time in the limelight tonight, with even a few acoustic performances thrown in. Crank up your hi-fi system - this is one Saturday night worth staying in for.

With the news that radio and TV presenter Chris Evans will be the new host of Top Gear, the Beeb has seen fit to broadcast the unaired last episodes of series 22.

It's a special hour-and-a-bit-long episode that will feature the two films shot for the last episodes of the show, with Clarkson, Hammond and May making their last appearances (before their new venture: Netflix's House of Cars).

England is in utter chaos as magic fully returns. But Strange is determined to save his wife Arabella, and to claim Mr Norrell. Will his gamble pay off? Or will the Raven King's dark prophecy come true and spell disaster for the magician?

Laura attempts to get rid of her synthetic helper Anita, but is forced to reconsider when Anita saves Toby's life.

Day 3. The music festivals ends with The Who celebrating their 50th anniversary on the Pyramid Stage. Highlights and more throughout the night.