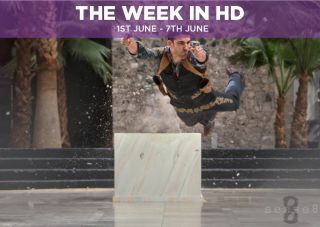 Clint Eastwood's story of Navy SEAL Chris Kyle blew the doors off the box office, taking in over half-a-billion dollars. The film simply, and dramatically, tells the story of the effects of war on a soldier, with both Bradley Cooper and Sienna Miller delivering fine performances.

American Sniper divided critics (and audiences) on release, with some suggesting it took a pro-war tone - and the film is certainly not without flaws. But it's worth watching and deciding for yourself. And it makes a great test disc, too.

Set in an unspecified future, Oscar Issac's Nathan – a reclusive CEO of a Google-type company – creates the world's first artificial intelligence being (Alicia Vikander's Ava) and invites Domhall Gleeson's Caleb to conduct a series of Turing tests to determine whether Ava's reactions are demonstrative of some sort of conscience.

It's safe to say that things start to go awry soon after, as Garland's script dabbles in subterfuge and complex ideas of what it means to be human and how we define it.

The three lead performances excel in their roles and though the ending stumbles, Ex Machina is a compelling film that merits a bigger audience.

The Wire: The Complete Series

Some of us have not seen The Wire (yes, we know), so here's a good reason to start - the complete series has made it to Blu-ray.

Although not without issues. While The Wire looks the best it has ever done, there's been some consternation online about the re-sizing of the image from 4:3 to 16:9.

Originally produced before the TV industry shifted to widescreen, the frame has been expanded on both sides, altering the original feel and intention of some scenes (and improving others).

That may be a dealbreaker for some considering how meticulously the series was put together, but according to David Simon – one of the creators behind the series – it's been done with respect.

Buy The Wire: The Complete Series on Blu-ray at Amazon

Like Full Metal Jacket but with more drumming, Damien Chazelle's Whiplash is a furious tale of sacrificing everything to be the best.

This is a very intense piece of cinema and the end features a raucous ten-minute performance that's destined to bring the house, but hopefully not your home cinema system, crashing down.

Buy Whiplash on Blu-ray at Amazon

Mark Wahlberg is The Gambler in this remake from director Rupert Wyatt. Wahlberg plays JIm Bennett, a Lit professor and frequent gambler who goes big and (just about) gets home. Bennett is amoral in the extreme and that makes him a hard character to like, treating everyone around him with disdain and contempt, much of it stemming from his own inadequacies.

Wahlberg is decent, going full tilt for the narcissm to the point where we'd love to slap some sense into him. Thankfully Brie Larson (very good in a small role) turns up as one of his students and does at least land one blow.

It's a grim film livened up by the presence of two gangsters: Michael K. Williams as Neville Baraka and John Goodman's Frank. Goodman dominates in his (regrettably) few scenes, a shaven-headed presence and effusive swearer, the film loses a bit of sparkle when he's not there.

Buy The Gambler on Blu-ray at Amazon

Hardhome. We're not far from the ending of what's been another compelling and violent series of Game of Thrones. The main plot concerns Jon and Tormund's meeting with the Wildling Elders as they brace for the White Walkers' attack.

Otherwise Hardhome focuses on the female leads, as Tyrion and Daenarys discuss future plots, Arya makes progress in her training, and Sansa forces Theon to tell her a secret.

Above The Vaulted Sky. Ethan, Sir Malcom and others batten down the hatches as the mansion comes under attack yet again. Elsewhere The Creature grows ever more impatient with Dr. Frankenstein.

Cookie has her work cut out if Elle is going to produce any new music.

Chapter Seven. Jane's plan to stay away from Rafael falls flat on its face when her friends ask her to get them into a club that he owns.

Clear & Present Danger. Paranormal powers ahoy!. When a pool hustler is killed, Castle and Beckett surmise that the killer may have done it with the help of an unseen force.

Things don't get any easier for Alison and Clare in the mid-point of The Affair's first series. As passions flare, their lives get a little more complicated when they're forced to confront new obstacles at home.

Day 12 of the the clay court action at Roland Garros sees the Mixed Doubles Final take place, followed by the Women's semi-finals.

Maria Sharapova has been knocked out, so who out of Williams, Kvitova and Ivanovic and co. can triumph?

One of Our Senior Realtors Has Chosen to Retire. The title of the episode is not the only strange thing happening in the town of Wayward Pines this week.

After his confrontation with Sheriff Pope, Ethan is named as the new town leader. His first task is to come up with some sort of punishment for a petty criminal.

It's the last in the series of The Game and the team is still reeling from last week's bombing and the shocking confession from the KGB mole.

Bobby and Wendy discover something that could spell trouble for the highest levels of the British government. Can they avert the impending disaster before it's too late?

SOS - Part One. The Inhumans have declared war on S.H.I.E.L.D, threatening to unleash the Terrigen crystals on anyone who stands in their way. People on both sides of the conflict will have to figure out where they stand. For Skye that means choosing between her real family and her adopted one.

There's also the matter of the sadistic Ward keeping Bobbi prisoner. That won't end well for anyone involved.

Worth watching just to see Michael Fassbender get the snot beaten out of him (if you like that kind of thing). Haywire has the feel of an action film from a bygone era where visual effects didn't run rampant.

The story is the stuff of B-movie action thrills as Mallory Kane (Gina Carano) is betrayed on a mission and seeks retribution by punching (and kicking) everyone who wronged her very, very hard.

We think it'sh under-rated. If you're looking for simple thrills then this Schwarzenegger-esque film (with a bit more class) is just the ticket.

The Wachowski's make their television debut with their own original series. Sense8 sees a group of people around the world suddenly linked together mentally and forced to band together to survive being hunted by those who see them as a threat to the world's order.

In true Wachowski fashion it sounds bonkers, and whether you liked and loathed Jupiter Ascending, they never balk from a challenge.

The Man Who Knew Too Much is another of Hitchcock's 'wrong person, wrong place' films.

The plot follows American physician Dr. Ben McKenna (James Stewart), his wife Jo (Doris Day) and their son Hank, who are befriended by the mysterious Louis Bernard while on holiday in Marrekesh. He's murdered shortly after, but before he dies he tells Ben of an assasination plot about to take place in London.

To complicate matters, Ben's son is kidnapped by a British couple who threaten to kill him if he doesn't stay silent. Ben and Jo have to go London to try and stop the assassination and save Hank, all with the police snapping at their heels.

The European club season culminates with the Champions League final between Juventus and Barcelona, in what's sure to be an intriguing clash of styles.

Juventus were last in a final over a decade ago. With Pogba, Vidal and Tevez in their line-up they'll have every chance of upsetting a Messi-assisted Barcelona team that's on course to do what no club side has ever done – win the treble twice.

A day of sport begins with the Republic of Ireland taking on England. It's the penultimate match of what's been a succesful season for England.

They're on the verge of qualification for Euro 2016 and you'd expect them to continue their good form into this match. Following events in Ireland will be…

…the finale of the French Open. We don't know who the finalists will be but we're expecting the usual suspects.

Djokovic, Murray and Nadal have been drawn on the same side of the draw, so Djokovic and Nadal will surely meet in the quarters, and whoever wins that may well face Andy Murray.

But that's not the end of the day's sport, as after the tennis comes…

…Formula One. F1 has taken a lot of criticism over the way the season is panning out. Monaco threw up an upset but only because a mistake made it possible. Canada is a power circuit and races tend to be fast and exciting, which may favour Mercedes who will be bringing an upgraded engine.

After the claustrophobic confines of Monaco, we'll be embracing the wide, open stretches of the Montreal circuit. Who will 'The Wall of Champions' claim as its latest victim this year?