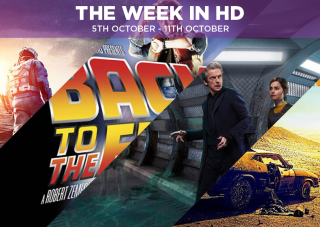 Also, don't forget to check out our dedicated Playlist Twitter account @WHFPlaylist for all the latest news and reviews of our favourite music, movies, TV shows and games.

George Miller returns to the wasteland after 30 years, and it's easily the most spectacular action film we've seen this year: a maelstrom of explosions and wrecked vehicles.

Max is back (played by Tom Hardy), but Charlie Theron as Imperator Furiosa is a new generation Sigourney Weaver. The plot is minimal but effective (it's basically a two-hour-long chase), but the real star of the film is the breathtaking cinematography, real stunts and insane soundtrack. It's pure visual and aural assault, and we can't recommend it highly enough.

Tomorrowland: A World Beyond

Boy-genius turned inventor-recluse George Clooney and young optimistic teen Britt Robertson go on a quest to rediscover the forgotten city of tomorrow (called Tomorrowland), and the results are decidedly so-so.

While there's a relentlessly positive message behind Brad Bird's film (it's based on the futuristic, 1950s space-age land found in Disney's theme parks) and there are a couple of inventive set-pieces, it never really captures the imagination in terms of storytelling.

Buy Tomorrowland: A World Beyond on Blu-ray at Amazon

Back To The Future Trilogy

It's possibly the greatest milestone in film and pop culture history: Back to the Future celebrates its 30th anniversary this year (yes, we all feel old, too), but even better: we're in the year that Marty McFly travels into the future in the second film. That's right, get your flux capacitors ready as 21st October 2015 is coming up.

Prepare your celebrations with this definitive boxset, and while hoverboards and self-tying sneakers may not be entirely widespread (yet), Marty and Doc's adventures have had a lasting impact. Thank you, Zemeckis and Spielberg, for the most perfect film trilogy ever made.

Buy Back To The Future Trilogy on Blu-ray at Amazon

Cluesmiths v Yorkers. The winners from the first round meet their new nemeses, and try to out-do each other when it comes to making connections and finding the missing vowels.

As Spectre approaches its release date (26th October) and drops its final trailer, why not re-watch Daniel Craig's first outing as 007? Eva Green, Mads Mikkelsen and Judi Dench shine in this action-packed film that still boasts the best writing of all the newest Bond films.

Axis Mundi. HBO drama The Leftovers returns for a second series, picking up with police chief Kevin Garvey (Justin Theroux) and his family joining a mysterious exodus to a small town in Texas. For what reason, we wonder?

The Devils Are Here. Empire is back with a bang in this second series premiere. We pick up the pace three months after Lucious Lyon's shocking arrest, but a little thing like federal jail time isn't going to stop him from running his empire from the inside.

After last week, The Daily Show's new host will be looking to build on what was a decent (if a bit creaky) start as he makes the anchor position his own. Though you could accuse Noah of not doing enough to step out of Stewart's shadow, expect more of his own personality to come out as the weeks go by.

The Final. It's the Great British Bake Off final! After 27 baking challenges, the 12 original contestants have been whittled down to the final three: Ian, Nadiya and Tamal. All three have been star bakers over the course of the sixth series, so any one of them could yet walk away with that trophy.

But they've still got three final challenges to get through. The signature is all about filled iced buns, the technical will be something they've all struggled with (choux pastry? chocolate? neat piping?), and the showstopper is a classic British cake. It'll be a tense and delicious final - we can't wait to see who is crowned this year's Bake Off champion.

Who Do You Think You Are? BBC Two HD, 9pm

League of Gentlemen actor/co-creator, Doctor Who and Sherlock scribe, and horror aficionado Mark Gatiss has always loved tales of the macabre and ghoulish.

In his search for where he gets this fascination from, he traces his mother's lineage to Northern Ireland, and finds out that not only were his ancestors storytellers, they may have also been... vampire slayers!

Bad Moon Rising. In this first series finale, Mitchell - who we last saw stabbed and left for dead - has to confront Herrick once and for all.

Meanwhile, Annie has to decide whether to go through the door or help Mitchell, while George seriously considers running away and starting a new life with Nina.

Christopher Nolan's ambitious space epic is an impressive feat of visual effects and dramatic storytelling, with astronauts Matthew McConaughey and Anne Hathaway tasked with ensuring humanity's survival. It's a movie that's easy to admire, but hard to love.

Read our review of Interstellar

The satirical news show may have lost its bite in its 50th series, but let's hope tonight's guest Charlie Brooker can bring back some scathing commentary. Regulars Ian Hislop and Paul Merton are also joined by Kathy Burke and Nish Kumar.

The Pager. Cracking D'Angelo's pager code gets them close to getting a wire tap on the Barksdale crew, while Bubbles helps McNulty get to Omar. Can he convince him to turn into an informant?

England's final Pool A game at the Etihad Stadium in Manchester will be bittersweet. With no chance of progressing to the quarter-final stage, it's the last time we'll see the host nation playing.

Let's hope they go out on a high.

Before the Flood. It's the concluding part to last week's spooky episode, with fearsome alien warlord - the Fisher King - setting his survival plan in motion. But with the Doctor forced to make some terrible decisions, is anyone on the underwater base safe?

The Russian Grand Prix. Lewis Hamilton won last year's inaugural Russian GP at Sochi, and with it ensured that Mercedes would win the constructors' championship. After equalling Ayrton Senna's number of race wins, is Hamilton on his way to victory once again?

With England assured of qualification and Wales just a point away from sealing a place at next year's tournament, attention turns to the other home nations.

Northern Ireland stand top of their group and need just two points from their final two games to qualify for Euro 2016. They may have already done it by the time they face Finland.