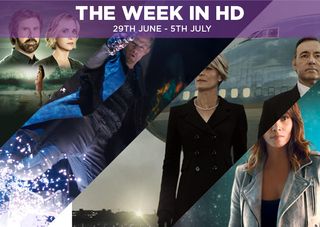 Underwood - now President of the United States - is finding the path of leading a nation is littered with people looking to take you down. It's another entertaining dose of amped up US politics, although considering what's going on in real life, we're not sure there's a difference.

It's not entirely successful with a sub plot involving Michael Kelly's Doug Stamper an unnecessary detour, but it's another confident batch of episodes with an ending that perfectly tees up the fourth series.

Buy House of Cards Series 3 on Blu-ray at Amazon

The Wachowskis' latest, Jupiter Ascending, is a 'like it, or don't get it' type of film.

The story is Cinderella – in Space! - as Mila Kunis's Jupiter Jones discovers she's the heir to a massive inheritance: Earth. That puts her on a collision course with the Abrasax siblings, a space-faring family who seed and harvest worlds.

Channing Tatum's half-lycan albino (yes, really) soldier Caine Wise rescues Jupiter before Eddie Redmayne's scenery-chewing Balem can get his pampered mitts on her. But this then brings her into a conflict between the rest of the Abrasax family as both Tuppence Middleton's Kalique and Douglas Booth's Titus vie for control of Earth.

The world the Wachowskis create is ambitious, silly and not without its faults. If you're interested in camp space opera with a side order of hammy acting, you may find Jupiter Ascending enjoyable.

There's a monster. It follows you everywhere, and it won't stop until it gets you.

Featuring Maika Monroe as a cursed teenager who has visions of being followed by someone… or something, It Follows is a scary, 80s inflected horror that goes down some unexpected routes.

Buy It Follows on Blu-ray at Amazon

A family on vacation in the French Alps see an avalanche heading straight for them, and in the panic the father instinctively leaves his family behind… only the avalanche doesn't reach them.

A winner at last year's Cannes Film festival, Force Majeure wrings some dark laughs from a situation that begs the question: what would you do?

Night Finds You. Life doesn't get any better for the cast of characters in True Detective as they struggle, search and scrounge for a better life to escape the one they're living.

The third series of Under the Dome leads with the inhabitants of Chester's Mill dealing with an electromagnetic pulse that's turning metallic implements into dangerous objects.

Sins of the Father. A mysterious woman from Lucious's past comes back into the fold. We're betting Luscious has some secrets he wouldn't like to be revealed.

And Hell Itself My Only Foe. Evelyn has captured Sir Malcolm, so it's up to Vanessa and Ethan to try to rescue him. Can they stop her?

Jane gets a nice surprise when the nuns offer her a permanent teaching position, but then she runs into complications when she's offered the chance to write a telenovela. Decisions, decisions...

Aperitivo. Dr. Frederick Chilton is alive and well, if not quite all there (if you get our meaning), and he's come up with a plan to draw Lecter out by using Will Graham as bait.

Will is still obsessed with finding Hannibal despite Jack's pleas to leave Hannibal in the past.

Noah comes clean to Helen about what he wants from their relationship as the affair starts up again.

Betrayal. Ethan has uncovered more about what's going on in Wayward Pines and decides to trust Teresa with everything he knows. But is he doing the right thing, or trusting the right person?

Extant is back for a second helping of sci-fi mystery with new cast members and the promise of a soft reboot.

Molly is still searching for her 'son' after last season's events and the second series sees Jeffrey Dean Morgan join the show as a cop looking to solve another mystery.

Oh, and Earth is on course to be destroyed by a race of malevolent aliens.

The famous Wimbledon tennis tournament has already started, but it really get going after the first few days. There's bound to be a shock or two in the tournament's early stages.

Serena Williams is the favourite in the women's draw, but she won't find it easy with last year's winner Petra Kvitova looking to defend her title. The men's side looks a bit more complicated, but the likelihood is that 2015's form players – Andy Murray and Novak Djokovic – will be in the mix for the trophy.

The Assassination of Jesse James by the Coward Robert Ford ITV4 HD, 11.10pm

A very long film with a very long title, Assassination is well worth watching if you can spare three hours.

Brad Pitt gives one of his better performances as the famous outlaw Jesse James, shot in the back by Robert Ford (Casey Affleck) who idolised James and then grew resentful of him after he joined James's band of outlaws.

It's a lyrical take on the legend of James that requires patience - but it's worth it. This is an underrated film full of striking images and character actors you'll recognise from you won't quite remember where.

The Tour de France starts in Belgium this year before making its way home. British interest is with Team Sky's Chris Froome, but as on pretty much every Tour there's bound to be a rider coming out of the peloton to grab the attention.

They don't do rivalries like they used to. Hamilton and Rosberg may be 'frenemies' but that rivalry is tame compared with the frosty relationship enjoyed by James Hunt and Niki Lauda.

Dramatised in the Hollywood film Rush, this hour-long BBC documentary recalls the 1976 season, as Hunt in the McLaren tries to win the championship ahead of Lauda's Ferarri. It was a dramatic season that ranks as one of F1's most memorable.

Terminator Genisys (sic) is out and with the film positioned as being the 'true' third film in the series (we'll believe it when we see it), it's probably best to catch up with the story so far in this superlative sequel.

Judgment Day takes the template of the first film and turns it on its head, with Arnie's killing machine now the hero, sent back to avert machine apocalypse from happening. The stunts are spectacular, Linda Hamilton transforms into a warrior and Robert Patrick is still really creepy as the morphing T-1000.

Formula One: The British Grand Prix BBC One HD, 1pm

The gap between Hamilton and Rosberg is now only 10 points after the latter's win in Austria. The odds are on Hamilton to win his home race, but a year ago it was Rosberg leading before machine unreliability forced him out.

Another win for Rosberg would make it four wins out of five and would really put the cat among the pigeons in the race for the F1 Drivers title.

In the US Lifetime Movies has a reputation for making schmaltzy, cheesy rubbish but that might change with this deadpan take on its own brand of TV movies.

Deadly Adoption has two comedy titans in Will Ferrell and Kristen Wigg as a couple who take in a heavily pregnant woman in the hope of adopting her unborn child.

Reviews in the US called Deadly Adoption peculiar and strangely un-comedic considering the talent involved. Perhaps that's the point?