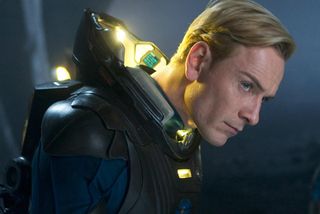 Welcome to The Week in HD - our guide to all the best high definition TV shows, films, sports and Blu-rays to grace your screens this week.

Here's what to watch out for this week:

A much-awaited prequel to Ridley Scott's 1979 Alien, Prometheus takes us back to question the origins of mankind...and of the mysterious space jockeys we've glimpsed over the years.

A team of scientists take to the skies to visit alien worlds about the Weyman Corporation-financed Prometheus, and find more than they bargained for. Michael Fassbender, Charlize Theron and Noomi Rapace star – but the movie's visual and sound effects are the real stars of the film.

Michelle Williams plays the legendary Hollywood starlet in this biopic about her tense relationship with Sir Laurence Olivier (Kenneth Branagh), told from the point of view of a young man in Olivier's employ, as played by Eddie Redmayne.

Patisserie. With only four semi-finalists left, it's all about pastry tonight: croissants, mousse cakes, iced fingers and petit fours. As the competition gets even tougher, Mary Berry and Paul Hollywood are looking for pure perfection. I just want cake.

One of Tim Burton's genuine horror best, with Johnny Depp, Christina Ricci and Christopher Walken. A New York policeman is sent to a sleepy Victorian village to investigate mysterious beheadings, and discovers the haunting curse of a headless horseman taking out specific people in the village.

They're back in Vegas, and now they've got old enemy Terry Benedict on their team. Sadly, no Julia Roberts in this one, but this time they're taking on Al Pacino, a ruthless casino boss who double crosses one of their own and lands him in hospital.

Danny & co get together one last time to pull off the biggest heist so far - it's a dazzling and entertaining end to the Ocean trilogy.

Rowan Atkinson returns as the accident-loving spy in this comedy spy film, to prevent an assassination that would throw the entire political world into chaos. Also starring Dominic West, Rosamund Pike, and Gillian Anderson.

During a time rife with mafia-enforced crime, two brothers find themselves on opposite sides of the law – one is a Brooklyn club owner who's made his success thanks to the Russian mafia, while the other is a cop – and both have their loyalties tested when the authorities and the mob go head to head.

The Blue Butterfly. In a film noir styled episode, Castle and Beckett track down a priceless necklace that went missing in 1947... amidst mobsters and molls and tommy guns and sharp suits and smoky femme fatales.

As Sam continues to investigate who betrayed her, a colleague is kidnapped by a criminal millionaire, and she gets ordered to kill off her fellow spy to prevent him from compromising his team.

A tense series one finale sees Mitchell facing off Herrick, and Annie and George rush to save their friend from joining the dark side.

Arthur's Bane, Part 2. The ancient prophecies concerning Mordred are back to haunt Merlin, and he's helpless to stop Arthur from meeting his possibly fatal destiny.

Ah, and here we were all thinking that last week was the last we'd seen of Nicola Murray. But luckily, the scandal behind Mr Tickell's death means both Nicola and Peter Mannion are in trouble, and both parties are scrambling to put their own spin on the story...

Let's hope for a spin battle between Pearson and Tucker. We really need to see Tucker meet the Coalition 'in-betweeners'.

Live coverage from the race at the Korean International Circuit.