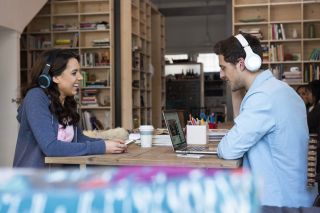 The Wearhaus Arc is a pair of Bluetooth headphones that combines the conventional idea that you want privacy when listening to your tunes with a social element that's often associated with music.

How? Well the Arc has been billed as the first pair of wireless cans that come with a mesh network built on top of that standard Bluetooth audio profiles and lets you sync with your friends' Arcs too.

An iOS and Android app will be made available to make the sharing process easier, showing what your friends are listening to and who is connected to their "station" – as well as letting you listen in.

The Wearhaus Arc come with 40mm dual diaphragm drivers and aptX Bluetooth on board, while its battery is claimed to last for 16 hours of solo use. A 3.5mm auxiliary cable is also included.

Meanwhile, you needn't get out your phone to control playback because Wearhaus has provided a touch-sensitive panel on the right earcup to let you do everything you'd want to using gestures.

The Kickstarter campaign set out to secure $50,000 worth of pledges by 13th December and, at the time of writing, the total stood at nearly $85,000 – making the Arcs the latest crowdfunded success.

With the funds that Wearhaus has secured, the company says it can now complete the production run and start shipping early in the New Year. It's expected the Arc wireless cans will cost $179.