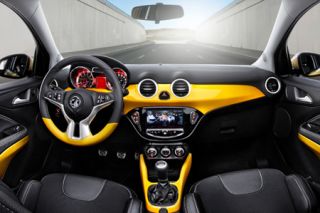 We're not entirely convinced by the name Adam for Vauxhall's forthcoming city car, but we are interested in its new infotainment system.

The problem for car manufacturers is that technology is developing so rapidly that any in-car audio system they build into the car will rapidly become outdated during its lifetime.

Vauxhall thinks it's come up with a cunning answer to the problem: the Adam will offer the option of a sub-£300 entertainment system that runs off your smartphone.

The as-yet-unnamed system uses a large, seven-inch touchscreen in the centre console, but it doesn't include any traditional infotainment features such as a sat-nav.

Instead, the driver plugs a smartphone into the unit and the operating system is mirrored on the screen. The driver can then play and control apps – such as music, video and navigation – via the screen.

The result is that the car's owner is not stuck with an outdated sat-nav, or a music or video player that plays unsupported formats, because the in-car infotainment capabilities will be updated through the phone.

Vauxhall says the top-of-the-range system will initially be compatible with Android and iOS devices. A CD/radio with USB and aux-in ports and Bluetooth will be standard on all models, regardless of whether or not the new system has been chosen.

You can read more about the Vauxhall Adam in this week's edition of our sister magazine Autocar, on sale now. Or go to the Autocar website.