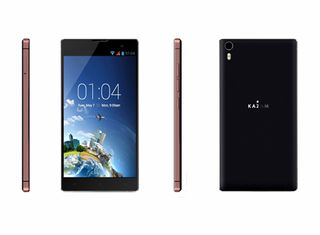 Fed up with Apple vs, Samsung? Uninspired by HTC and LG? Then you may be interested in the latest flagship phones from fledgling UK smartphone brand, Kazam.

Kazam has unveiled its first octo-core handsets, the Tornado2 5.0 and 5.5, both of which are expected to be available across Europe from Q2, making them some of the first octo-core phones to hit the UK.

Kazam has released details of two octo-core handsets that will be available under the Tornado2 brand – the 5.0 (pictured below) and 5.5 (pictured above). Both smartphones will run on the Android 4.2.2 operating system.

"The KAZAM Tornado2 range delivers the ultimate mobile experience for those who demand a lot from their phone, it is a master of multi-tasking," said Kazam CEO Michael Coombes.

Meanwhile, other Kazam smartphone ranges available from Q2 include the quad-core Thunder2 range, with the 4.5L model confirmed as the manufacturer's first LTE-enabled handset.

There will be four models released under the Trooper2 brand, with screen sizes ranging from 4in to 6in (5in version pictured), while Kazam has also announced a feature phone line-up under the Life banner.

Atkins, who holds the title of CMO at Kazam, said: "Kazam is taking a fresh approach to mobile and will continue to pose difficult questions and challenge convention."

The company already lists online retailers including Amazon and Clove as stockists, but expects to make further "country specific announcements made to coincide with in-store availability".

Look out for our hands on reviews of the most interesting new Kazam phones from the UK launch next week.