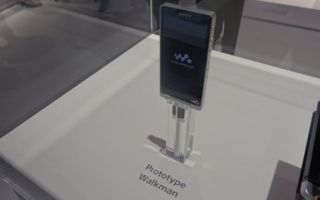 Sony has confirmed its flagship high-resolution audio Walkman, the NWZ-ZX1, will be coming to the UK.

The Walkman, which we first spied at IFA in Berlin last year, is due for release this February and will come with a price tag of around £550.

You can read our first impresions of the ZX1 in our hands-on review and we will be bringing you an exclusive review of the finished UK product very soon.

We originally spotted the new NWZ-ZX1 at IFA, amongst the new family of Sony high-resolution hi-fi products.

Alongside the officially-announced high-res Sony Walkman F886 – which sports WiFi and the Android OS for apps, web browsing and more – was a product simply labelled "Walkman Prototype".

Contrary to early reports, the ZX1 does feature WiFi connectivity and will run Android 4.1 (aka Jelly Bean) but the specs still don't show an FM tuner. Battery life looks to be around 30-40 hours although this will obviously depend on playback conditions...

Needless to say at IFA, Sony assured us this flagship Walkman would sport sophisticated internal circuitry and other top grade audio components for optimum sound quality.

The ZX1 has a leather-effect rear casing as well as a notable bump in the profile, which Sony claims "improves holding comfort" and "holds all the key components for improving sound quality".

While we can't vouch for the feel, the aluminium edge on the design did look smart, with a simple Sony logo and the odd flash of colour to brighten the display.

Also on display at IFA was a prototype headphone amp, the PH-A2, which could possibly be portable, though this wasn't confirmed.

According to Sony Japan's website, we're looking at a December launch, although there's yet to be any official confirmation for the European market. It's priced at ¥74,800 which is around £482. It's isn't exactly cheap - let's just hope sound quality is up to scratch. Then again, compared to the Astell & Kern AK120, it's not so pricey...

It's clear that Sony is serious, once more, about high-resolution audio, and with the LG G2 phone and Samsung Galaxy Note 3 being released with high-res support, it seems they're not the only ones.