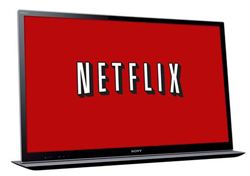 But Sony has also confirmed to us that the update will only apply to 2012 models – Netflix won't appear on older Sony devices.

Netflix costs £5.99 a month for a selection of SD and HD films, which you can watch on a range of devices including your PC or laptop.

The service is already available on LG, Panasonic and Samsung TVs, plus Apple iOS devices, the PS3, Wii and Xbox 360.

Sony already offers its Music Unlimited and Video Unlimited services, which allow users to buy or rent films on a pay-as-you-go rather than subscription basis across a range of devices, including the Sony Tablet S.

The Netflix app will be available on all 2012 Bravia TV, Blu-ray and home-cinema-in-a-box products.

“We’re very excited about the addition of Netflix to our SEN portfolio” said Edd Uzzell, Sony category development manager. “All of our consumer products – whether that is a BRAVIA, VAIO, Tablet or Xperia – are designed to provide the best quality content possible, and having great content providers offers consumers greater choice for their home cinema experience.”

For more details visit see the Sony or Netflix websites for a list of compatible devices.