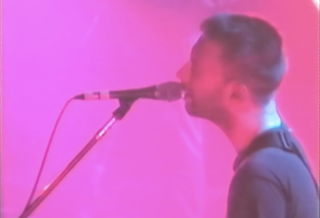 With an incredible back catalogue of tracks including I Want None of This, Sulk, Bullet Proof...I Wish I Was, Separator, In Limbo, Life in a Glasshouse and How to Disappear Completely, anyone even vaguely familiar with Radiohead can see that they cut their teeth writing songs about personal alienation and social distancing, long before it was a thing.

Thus, the news that Thom Yorke and co. are posting weekly classic concert videos to the band's YouTube channel as a way of helping isolated fans through this pandemic is hardly a jolt from the blue – but it's a lovely gesture, nonetheless.

The series starts tonight (Thursday) at 5pm ET (or 10pm if you live in the UK). First up is Live from a Tent in Dublin, a gig which the band played on 7th October, 2000. That night, Radiohead's set consisted largely of tracks from Kid A, which the band had released barely a week before the show.

It's a great shout to kick off the series, and fans of OK Computer and The Bends also have something to look forward to with Just and Paranoid Android also in the setlist.

If you simply can't wait a moment longer, you could watch the gig now via the Radiohead Public Library, (an online archive launched by Radiohead earlier this year) but where's your sense of community? You’ll miss out on all the fun if you do that! It's all about reminiscing – if you were lucky enough to be there – chatting with other fans, compiling your list of best ever Radiohead songs and music videos, complimenting the staging and so on.

Radiohead isn't alone in its efforts to reach out – everyone from Neil Young to Niall Horan is doing similar things to stay connected with fans now that concerts aren't an option. Our advice? Check the channels, support your favourite bands and share some music.

8 ways to support your favourite bands and artists during lockdown