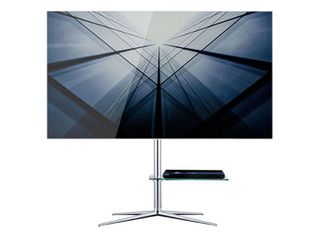 Samsung is planning to release zero-bezel TVs in late 2012 or 2013 to keep hold of its TV throne, according to our colleagues on Stuff.tv.

The current D8000 series TVs sport a mere 8mm bezel, but apparently that's still too much for Samsung.

Not only will Samsung's whole TV line get on board with the zero-bezel look, Samsung is also gunning to make the thinnest LCD/LED TV ever, according to Stuff's anonymous tipster.

With LG's 4mm thick OLED TV due for its debut at CES next week and Samsung's skinny, almost bezel-less 75in D9500 that landed in Korea in November, the next generation of TVs are set to be downright skeletal.

So where's everything going to go? – we hear you cry. Ignoring the trend in all-in-one PCs, Samsung's instead gearing up to separate the screen from the TV's PCB and link the box and display together via a wired connection.

We've mocked up a picture to give you an idea what a zero-bezel set will look like, but may have to wait a while to see the real thing.