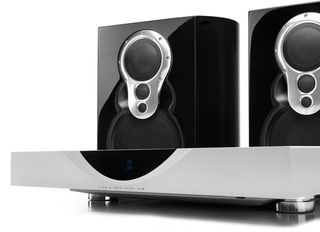 Scottish hi-fi specialist Linn Products has recorded a dip in sales and profits for the year to June 30th, 2013 but says increased R&D investment has put it “in a strong position for our ambitious rollout plans for 2013/14”.

Much of the shortfall was attributed to the fact that Linn held back three of its key new product launches – the Akubarik speakers, Exakt audio system (above) and the 40th Anniversay LP12 – to coincide with the company's 40th Anniversary party which took place after the financial year end.

MORE: Behind the scenes at the home of Linn

"This significantly decreased new product launches in the 2013 financial year. Despite this reduced new product portfolio, which included Linn’s integrated Akubarik active speakers (below) introduced towards the end of the financial year, turnover remained buoyant at £16.38m, a five per cent decrease on the previous year."

Sales in Africa, Asia and Australasia rose more than five per cent on the previous year to £3.47m, and the company continued to expand its presence in China.

Commenting on the figures, managing director Gilad Tiefenbrun adds: “We are pleased with our performance in the financial year and are excited about the opportunities that lie ahead. We are proud to celebrate 40 years of success and will continue to lead the market in creating outstanding home music systems from our Scottish base for the next 40 years.”

Linn says it has invested heavily in its new Klimax Exakt audio system which it claims "puts the source in the speaker". Linn says the new system combines and improves on three of the company's key innovations: Source-First, Aktiv and DS.

It sends digital data losslessly, eliminating distortion and noise and only converts to analogue at the last possible stage. The digital-to-analogue process takies place inside the Exakt speaker, with both speakers having a digital receiver, DAC and amplification inside.