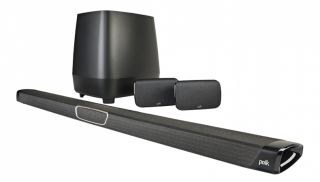 The universe has a natural duality – day and night, yin and yang. So it's only right that Polk Audio's MagniFi Mini also has a counterpart: the new MagniFi Max SR.

Along with three built-in Ultra HD 4K HDMI inputs, one HDMI output, an optical input and a 3.5mm port on the soundbar itself, the MagniFi Max has a Bluetooth and ethernet connection for wireless streaming. There's also Chromecast built-in, so you can stream music from enabled apps like Tidal and Deezer (or other Google Assistant speakers like the Home or the Sony LF-S50G).

The Polk comes with its own remote, but 'Smart Remote' compatibility means you can use your existing IR TV remote too.

The MagniFi MAX SR will be available in December, priced from £700.

10 best Christmas gift ideas for when money is no object