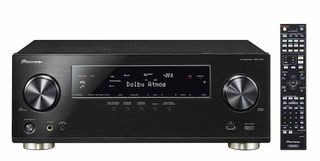 Pioneer's opening gambit consists of three new models, the VSX-830 (£399), VSX-930 (£499) and VSX-1130 (£599), all of which go on sale in May. They're the first Pioneer AV receivers off the production line following Onkyo's acquisition of Pioneer's AV division earlier in the year.

The VSX-930 and VSX-1130 get the headline features, including Dolby Atmos functionality, Pioneer's MCACC PRO speaker calibration software and a higher quality DAC, compared to the VSX-830. The main difference between the '930 and '1130 is the latter has an aluminium front panel instead of plastic.

All three amps feature HDMI 2.0 inputs, which are compatible with 4K video at 60fps (frames per second). HDCP 2.2 ensures all the amps will be compatible with 4K Blu-ray discs, when the format finally launches later in the year. Wi-Fi and Bluetooth are both present too.

But the features don't stop there. There's built-in access to vTuner internet radio and Spotify Connect, a brand-new user interface, and the amps all come equipped Pioneer's AVNavigator software which gives an interactive guide for set-up. Download the company's iControlAV5 app for iOS and Android devices as an alternative to their standard remote.

Pioneer isn't the only manufacturer with new AV amps in the pipeline - both Onkyo and Sony have new entry-level models scheduled for launch in the coming months. We can feel a group test coming on...