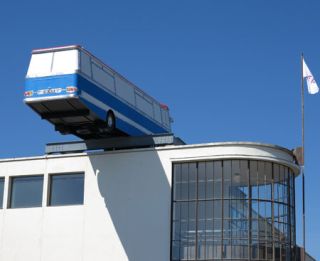 Took a day out yesterday – yes, I know, but the weather was too good to miss – to combine a visit to the South Coast with the opportunity to indulge my passion for The Italian Job.

Before we go any further, let's just make it clear we're talking the real Italian Job – the 1969 Peter Collinson original, not the ever-so-slightly-rubbish-not-to-mention-pointless 2003 F Gary Gray remake; the one with Michael Caine, Noel Coward and Benny Hill, not Mark Wahlberg and Charlize Theron; the one with the real Minis in, not small BMWs.

Anyway, the film is now being celebrated with a full-size replica of the bus used at the end of the movie teetering on the roof of the De La Warr Pavilion, a glorious – and beautifully restored – mid-1930s Modernist edifice on the sea front at Bexhill-on-Sea.

Last time I went to the De La Warr, many years ago, 'faded grandeur' just about summed it up: it seemed only to be popular with those who'd probably been visiting it when it was opened in 1935, and 50 years on so on the seafront hadn't been too kind to the old girl. There was a definite air of the Bide-a-Wee resthome about it, and an all-pervading odour one would charitably associate with long-boiled cabbage.

Now restored, the place is all spiffy and gleaming white, with a rather fine cafe on the first floor opening out onto a terrace – just the place to pass an hour or so on a fine morning.

There's a beautifully restored auditorium, able to seat 1000 for film screenings, live shows – upcoming this autumn, Marc Almond, Adam Ant & The Good The Mad & The Lovely Posse, and June Tabor and Oysterband – and the like, and some good exhibition spaces

Oh, and a replica 1964 Harrington Legionnaire six-wheel coach, registration ALR 453B, hanging over the edge of the roof.

Yes, the Italian Job bus, its rear half hanging out in free space, and with a hydraulic mechanism gently rocking it back and forth. It's an installation by artist Richard Wilson, called Hang On a Minute Lads, I've Got A Great Idea.

Wilson says 'Producing this cinematic moment as a sculpture was not just about a structural daring but more a metaphor about the absolute limits of anything, being engaging.

'Being a red white & blue coach makes it a flag waving work for the Olympics.'

Sponsor of the work was actor and comedian Eddie Izzard, who's a big fan of the film: a decade ago he based his classic discourse on 'The best laid plans of mice and men' around mice smuggling cheese out of Turin in Minis, concluding 'So if you haven’t seen The Italian Job, this is all meaningless, by the way – but then, if you haven’t seen it, you probably haven’t lived'.

'By the end of 2012 I would hope that the word goes out from our country that not only do we run excellent world events, but also we balance coaches on the edges of buildings like no one else ever could.'

And if you can, you really should get down to Bexhill and see Hang On Lads…, which is on show until the beginning of October, for yourself – especially if you're an Italian Job fan.

I'd seen the pictures all over the web, but you really need to stand underneath the bus, then go up onto the De La Warr's roof terrace and see it up close – I'd defy anyone not to think 'That's just gloriously British and mad', and come away with a silly grin on their face.

I found myself taking some pictures, going off for a walk, endlessly looking back to see the thing from a different angle, and then going back for more shots.

Inside the building there's a small exhibition of Wilson's drawings and models for the installation, including one on which the bus is motorised and rocks, and just in case you need any greater incentive, there's a planned gathering of Minis for a photo-shoot on August 19th at noon – they'll even let people with shrunken BMWs in – followed by open-air sets by Northern Soul DJs Jim Watson and Ray Patriotic, then a screening of the film in the auditorium.

And on August 25th they'll be showing The Italian Job open air at sunset.

But I guarantee you'll spend some of your visit listening to dads of a certain age explaining to their youngsters the meaning of the bus, and the plot of the film.

My favourite overhear of the day? A nipper asking his parent, as they walked across the car park toward the building, 'Dad, is that bus meant to be up there…?