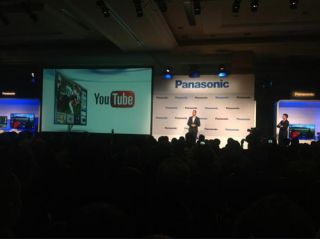 Panasonic has unveiled 32 new TVs at CES 2013, and promises to 'redefine television' with greater interaction and personalisation for their users.

Greater personalisation and interactivity is Panasonic's focus for this year, with the most 'radical' new feature being 'My Home Screen'. This feature available on certain models of 2013 Smart VIERA HDTVs groups all of the user's web content and programmes into one single home screen for quick and easy access.

For families, each member can create their own personalised screen, and their are built-in cameras on certain sets that incorporate face-recognition that matches the viewer to their personal home screen.

Voice control makes their way to Panasonic TVs, where you can navigate your way through your TV using voice controls, and the voice guidance feature increases accessibility by reading out text content on your TV screen.

From smart device to TV screen

Panasonic has taken into account the increased user experience of smartphones and tablets, and has refined the Swipe and Share 2.0 feature, through which you can share photos and videos from your device to your TV screen. With a single swipe of your finger, you can transfer images from your device straight to your TV - the live demonstration was instant indeed.

There's also a Touch Pen that lets you add writing to the photos transferred on to your screen, and the edited picture can be transferred back to your smart device.

Further interactivity includes a partnership with the Home Shopping Network, where users can both watch and shop simultaneously. The Shop by Remote function 'combines the TV and online experience' by giving users access to over 40,000 products and enhance their online shopping experience by providing videos, user reviews and product details - all on the TV screen.

The 32 TV models launched this year are split in two: with 16 Plasma screens and 16 LED screens, with screen sizes ranging from 32in to 65in and all-round better picture quality on offer.

The flagship ZT60 (above) heads up thepPlasma range, which also includes the next generation models in the VT and ST series. Screen sizes range from 42in to 65in.

The Full HD 3D ZT60 comes in two screen sizes of 60in and 65in. It includes all the new features of My Home Screen, Swipe and Share 2.0, and the Touch Pad Controller, as well as incorporating voice control to navigate your way through the web browser.

The VT series features 65in, 60in and 55in screens, and includes built-in side speakers and, for the first time for Panasonic, a built-in camera.

The ST series (above) follows a similar pattern, with an additional 50in screen, and 42in screens can ben found in the non-3D ranges of S60 and X60.

The Plasma TVs will be available from February.

On to the LED side of things, Panasonic has launched the next generation of its WT and DT series, with its IPS Panel technology promising improved backlight, local dimming and contrast ration for an all-round better picture quality.

A highlight of the flagship WT60 series is the addition of a built-in camera - a first for Panasonic.

The WT, DT and ET series – the ET is shown above –will include the new Smart VIERA features of My Home Screen, Swipe and Share 2.0 and Voice Interaction/Guidance.

The LED TVs will be available from Spring of this year.

Panasonic My Home Screen video, below:

Following on from last year's models, Panasonic has released the next generation Full HD 3D Blu-ray players: the DMP-BDT330 and DMP-BDT230.

New features on the two players include Display Mirroring and Miracast, which allow you to transfer and share media content from your tablet or smartphone straight to your TV.

Panasonic seem happy with the success of the DMP-BDT500 and DMP-BBT01 Blu-ray players launched last year as they remain in the 2013 Blu-ray line up, and there are also two new 2D disc players, the DMP-BD89 and DMP-BD79.

Panasonic has also unveiled a tablet-only SC-NP10 wireless speaker. There's no docking station, which makes it compatible with multiple tablets of all sizes and models - all you have to do is prop your tablet on to the SC-NP10 and stream your music wirelessly.

The speaker uses Near Field Stereo Sound to produce a more 'realistic' sound when positioned close to the listener, and a 2.1 Surround Sound aims to reproduce movie sound with an integrated 3-1/8in subwoofer.

Also launched are two new media streaming players – the DMP-MST60 (above) and DMP-MS10 – which feature the same technology used in Panasonic's Blu-ray players, and offer a disc-less option for all your online services and video on demand streaming options.

And last but not least, the Panasonic RP-BTGS10, shown above, is the new Wireless Bone Conduction headphone design, which allows user the ability to listen to personal music wirelessly without blocking the noises of the outside world.

And it's not just for joggers and cyclists: Panasonic also recommends using these headphones when watching TV for a better sound experience.